Once known as "Hiring Day" or "Heartbreak Day" to slaves, Jan. 1 was a day that tore many families apart 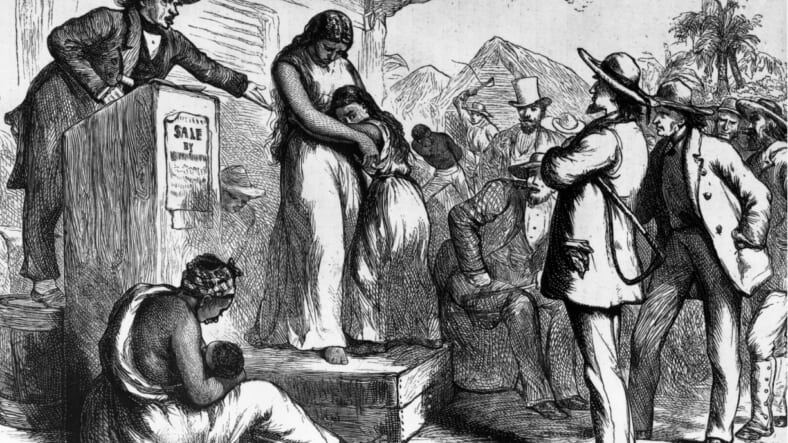 Circa 1830: A slave auction in America. (Photo by Rischgitz/Getty Images)

With the countless amounts of motivational 2020 memes, statuses and tweets, it is hard to remember that during this time of year less than 200 years ago, enslaved people were filled with dread.

According to TIME, New Year’s Day or Jan. 1 was often referred to as “Hiring Day” or “Heartbreak Day.” What does that mean? On that day, many enslaved Black people anxiously waited to see if they would be rented out to another family or household. This would, in turn, separate them from their families. This, as an alternative to selling a slave, was practice all too familiar during the time of chattel slavery. These transactions took place in town squares, on courthouse steps and on the side of country roads.

The enslaved would enter contracts for various amounts of time throughout the year, but there were many that began on New Years Day and lasted for up to a year. TIME reported that those who resisted would have faced whippings and/or jail time.

“‘Hiring Day’ was part of the larger economic cycle in which most debts were collected and settled on New Year’s Day,” Historian Alexis McCrossen said.

“On New Year’s Day, we went to the auctioneer’s block, to be hired to the highest bidder for one year,” Israel Campbell wrote in an 1861 memoir.

An enslaved man named Lewis Clarke said, “Of all days in the year, the slaves dread New Year’s Day the worst of any.”

While some were rented, many were still sold.

Harriet Jacobs, the first Black woman to write a “slave narrative,” wrote in her autobiography Incidents in the Life of a Slave Girl, of a woman who went to the auction block with all seven of her children.

“A mother leads seven children to the auction block. She knew that some of them would be taken from her; but they took all,” Jacobs wrote.

Jacobs went on to explain that one by one, all of the woman’s children had been auctioned off, which caused her to yell in pain, “gone! All gone! Why don’t God kill me?”

A lot of the time, parents could not know where their children were being taken, which caused further pain.

Though the abolition of the transatlantic slave trade on Jan. 1, 1808 gave some enslaved people hope, there was so much longer to go to see any real change.

“Different slave-trade abolition commemorations took place between 1808 and 1831, but they died out because the domestic slave trade was so vigorous,” McCrossen said.

In spite of its dark history, New Year’s Day would eventually be associated with something that was a lot more promising: Freedom.

READ MORE: Back to Africa: New York politician experiences the ultimate homecoming during a life-changing visit to Senegal

On Jan.1, 1863, Abraham Lincoln signed the Emancipation Proclamation. Hours prior to the announcement, enslaved people had been attending a prayer services at Black churches across the country when they received the news. This monumental event led to the tradition of New Years Eve prayer services, which continue to this day.