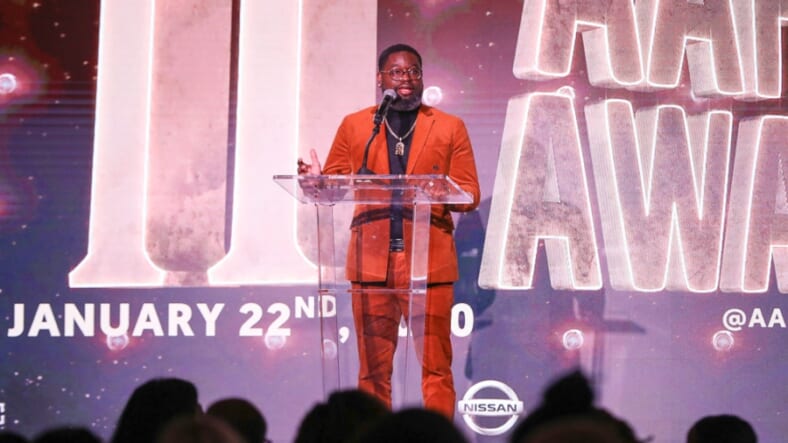 The 11th annual AAFCA Awards was a star-studded event that honored Jamie Foxx, Eddie Murphy, Lupita Nyong’o and other luminaries. All the big names made sure to be there for a night of Black excellence.

Matthew A. Cherry, a first time Oscar nominee for his short film Hair Love, was shown love as Breakthrough Filmmaker. He noted the importance of our community honoring each other. He described the night as a “dream”.

Last night felt like a dream. Huge thanks to @gilrobertson & @theaafca for honoring me with their Breakthrough Filmmaker Award. It’s important to show love to each other. Big thank you to @pramsey342 for a great intro and to my @SonyAnimation family for the support. #HairLove pic.twitter.com/bSJ42UKlDA

Kenny Leon, one of the leading directors of Broadway, was awarded the Innovator Award during the ceremony.

Congratulations to the inspiring Kenny Leon on receiving the Nissan Innovator Award! Your creativity is changing the game. #NissanDiversity #AAFCA cc: @theaafca pic.twitter.com/dB2zICTtXT

Jordan Peele’s “Us” which grossed $255 million globally was awarded the Best Film. The director was also recognized for Best Director and Lupita Nyong’o highlighted for Best Actress. Gil Robertson, AAFCA President, and Co-Founder, explained to Deadline that Peele had raised the bar in film and horror.

“With ‘Us,’ he once again upended the horror genre. His centering of a black nuclear family determined to survive in a complex storyline in a genre where black family units have historically been unseen is extraordinary,” Robertson said.

Murphy got AAFCA’s Best Actor honor for “Dolemite Is My Name” and Foxx was in the winning circle for Best Supporting Actor for his role in “Just Mercy”. Da’Vine Joy Randolph earned Best Supporting Actress for Dolemite. The wide range of movies and performances selected reflected Robertson’s desire to showcase the full range of Black talent.

“This year’s (eleven) best films reflect a wide spectrum of diversity and creativity. Many of them tackle social injustice and challenge the criminal justice system in the United States specifically,” Robertson said.

“AAFCA members, who put in their ballots from as far away as Australia and Jamaica, cast a wide net to recognize films made in the U.S. and beyond. Their choices truly reflect the best of cinema in 2019.”