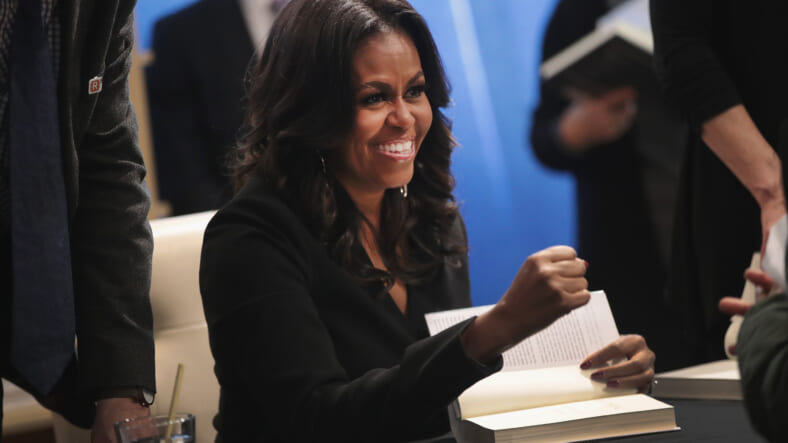 Former first lady Michelle Obama kicks off her Becoming book tour with a signing at the Seminary Co-op bookstore on November 13, 2018 in Chicago, Illinois. (Photo by Scott Olson/Getty Images)

The best-selling author took home the award for Best Spoken Word Album for the audio recording of her memoir, Becoming, at the 62nd Annual GRAMMY Awards.

Although this is her first Grammy win, Mrs. Obama is no rookie when it comes to Grammy nominations. She received a nod for 2013’s American Grown: The Story of the White House Kitchen Garden and Gardens Across America.

Since hitting bookshelves in 2018, Becoming has sold more than 12 million units worldwide and has been published in 46 languages. The audiobook has also been on the New York Times Audio Nonfiction Best Seller List for 14 straight months since its publication, including 7 months in the #1 slot.

CHICAGO, ILLINOIS – OCTOBER 29: Former first lady Michelle Obama and her brother Craig Robinson are interviewed by Isabel Wilkerson at the Obama Foundation Summit at Illinois Institute of Technology on October 29, 2019 in Chicago, Illinois. The Summit is an annual event hosted by the Obama Foundation. (Photo by Scott Olson/Getty Images)

Becoming tells the story of Mrs. Obama’s journey from the South Side of Chicago to finding her voice as an attorney, non-profit leader, and eventually the first African-American First Lady of the United States.

We think it’s safe to say that Becoming is a bonafide success.

The always eloquent Mrs. Obama celebrated her win saying, “Thank you to the Recording Academy for this honor! I had plenty of doubts about sharing so much of myself in Becoming, but this moment is another reminder that when we own the truth of who we are, we give ourselves the chance to connect with others in real, meaningful ways.”