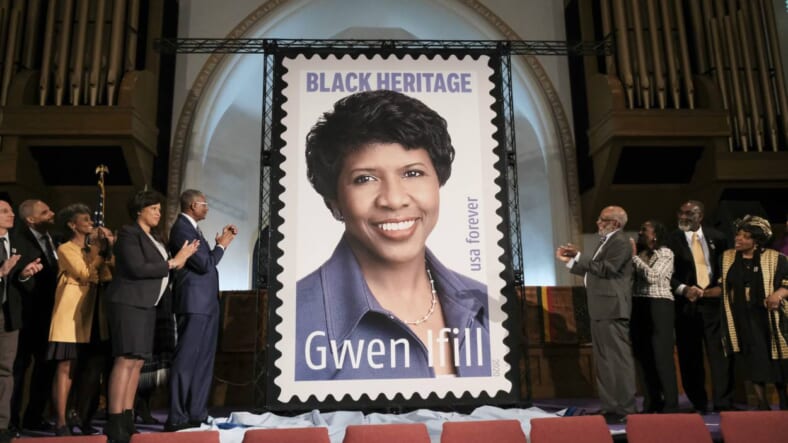 The U.S. Post Office today released its Gwen Ifill forever stamp and it’s giving us all the smiles.

Ifill, 61, was a veteran journalist who blazed a path for both Blacks and women in the news business, although she appeared uneasy with the accolades about her achievements. She once told The New York Times, she looked forward to the days when it wouldn’t seem like “any breakthrough at all” for a Black woman to lead a national news program, according to NPR.

She died of cancer in 2016, yet the post office’s decision to memorialize her on a commemorative stamp, and unveil it on the eve of Black History month, shows she is still making history. Ifill will be the 43rd stamp in the Black Heritage series, according to the U.S. Postal Service.

Ifill began working as a print journalist at The Boston Herald in the late 1970s during a time when it was rare for a Black woman to work as a journalist in a newsroom.

“I came to work one day and found that someone had left at my workspace a little note that said (expletive) go home,” Ifill said in the Makers documentary, according to NPR. She would go on to work for several national newspapers, including the Baltimore Evening Sun, The New York Times and The Washington Post before getting into broadcast journalism.

“She touched my life because she was a damn good reporter,” Allison Davis, one of several founders of the National Association of Black Journalists, told NPR. “She is what everybody should aspire to be.”

The forever stamp includes a photo of Ifill taken in 2008 by photographer Robert Severi. In it, she looks engaging, confident and assured, which is what millions of Americans came to love about Ifill. The USPS receives roughly 40,000 suggestions for commemorative stamps each year, but only a few actually become stamps.

“She developed a reputation as a tough, incisive reporter who was serious about the work but never took herself too seriously. She achieved a lot of firsts. In 1999, she became the first Black woman to host a national political talk show on TV — PBS’ ‘Washington Week In Review.’ She was the first Black woman to moderate a vice presidential debate in 2004, returning for the 2008 VP debate,” NPR’s Eric Deggans wrote.

READ MORE: University names college for Gwen Ifill, but causes discord in its choice of dean

Davis told NPR that she is happy that Ifill is getting this honor but that she deserves it because of her contributions to journalism and not just because it’s almost Black History Month.

“She’s historical, and she should be honored all the months of the year. Because that’s the incredible legacy she leaves,” Davis told NPR.