The Netflix film chronicles the beginnings of the disability-rights movement. 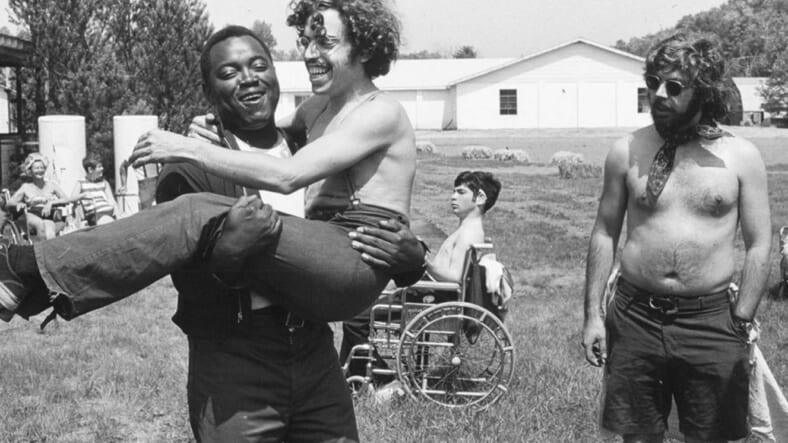 When Crip Camp debuted on the opening night of the 2020 Sundance Film Festival, lines of ticket-holders were left without a seat because of the enormous demand. Part of the hype was likely due to the fact that the film was executive produced by Barack and Michelle Obama, making it instantly intriguing if nothing else.

The Netflix film does not disappoint and welcomes viewers into a world they may not have considered before being mesmerized by the dedication, perseverance, and truly remarkable moments it serves up from the first minute.

Down the road from Woodstock, a revolution blossomed in a ramshackle summer camp for teenagers with disabilities, transforming their lives and igniting a landmark movement.

In the early 1970s, teenagers with disabilities faced a future shaped by isolation, discrimination and institutionalization. Camp Jened, a ramshackle camp “for the handicapped” in the Catskills, exploded those confines. Jened was their freewheeling Utopia, a place with summertime sports, smoking and makeout sessions awaiting everyone, and campers felt fulfilled as human beings. Their bonds endured as they migrated West to Berkeley, California — a promised land for a growing and diverse disability community — where friends from Camp Jened realized that disruption and unity might secure life-changing accessibility for millions.

Co-directed by Emmy®-winning filmmaker Nicole Newnham and film mixer and former camper Jim LeBrecht, this joyous and exuberant documentary arrives the same year as the 30th anniversary of the Americans with Disabilities Act, at a time when the country’s largest minority group still battles daily for the freedom to exist.

It’s nearly impossible to leave this film unchanged or uninspired. Watching kids contend with challenges in the relentless way they do and recognizing how many similarities we share despite major differences is an intense and illuminating experience. Of course, the doc is not all fun and games and the darker aspects of reality for the disabled people of the country are much more alarming than we ever considered.

Crip Camp doesn’t offer any tidy solutions to the ongoing issues, but it certainly ignites a desire to learn and do more.