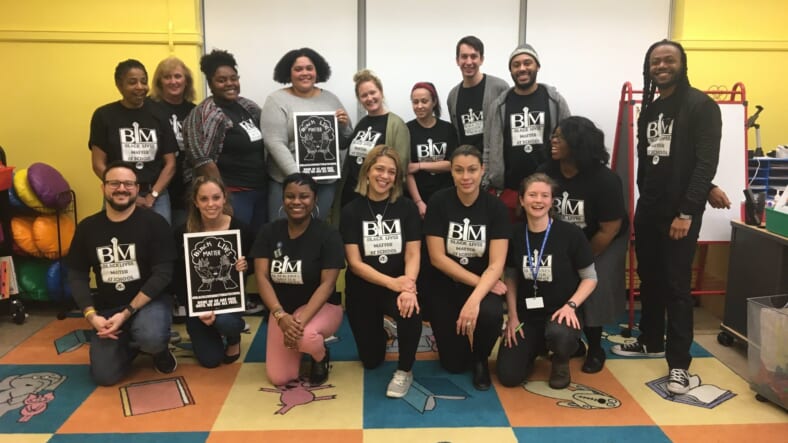 The Boston Teachers Union recently held its third annual Black Lives Matter week-long observance, and at least one police union was not feeling the message.

Michael Leary, president of the Boston Police Patrolmen’s Union, fired off a letter to Boston Teachers Union President Jessica Tang.  He wrote that BTU should not be commemorating the national Black Lives Matter Movement because it makes police officers less safe.

“Policing has always been a dangerous profession, but groups like Black Lives Matter, by inaccurately demonizing police as racists who kill innocent people, have made policing more dangerous than ever before,” Leary wrote in the Feb. 3 letter, according to The Bay State Banner.

READ MORE: Philadelphia police, roiled by harassment scandal, brings in Black woman to turn it around

In a joint statement, the NAACP Boston Branch and the Massachusetts Association of Minority Law Enforcement Officials came out in support of the BTU observance.

“There are many police officers who understand the ideals and values behind BLM and align themselves with BLM and other social justice organizations,” the statement read.  “We do not believe BLM is synonymous with ‘anti-police.’ In fact, we believe that BLM is a reflection of the historical mistreatment of Black and brown people in this country, not only by law enforcement but also by a culture that has quietly undermined the value of the lives of Black and brown people.”

On Wednesday, Tang testified at a School Committee meeting in favor of adding funding for school mental health counselors as opposed to having police officers respond to school-related disciplinary issues.

“We believe counselors need to be a higher funding priority over theoretically increasing the number of police in schools,” Tang told School Committee members, according to the newspaper. “With limited budgets and cuts we believe adequate access to social-emotional well-being, restorative practices and other efforts are more effective than increasing police presence in our schools.”

Tang and dozens of teachers and students wore Black Live Matters t-shirts to the School Committee meeting. Although BTU’s observance is not affiliated with the national Black Lives Matter movement, it is part of a growing movement of teachers becoming increasingly vocal about policies that they say cause harm to Black children. That movement started in Seattle several years ago.