Chicago Mayor Lori Lightfoot responds to viral memes about her: ‘I’ve enjoyed them’

In one post, the mayor is shown standing in front of police barricades blocking the lakefront trail from rule-breakers. 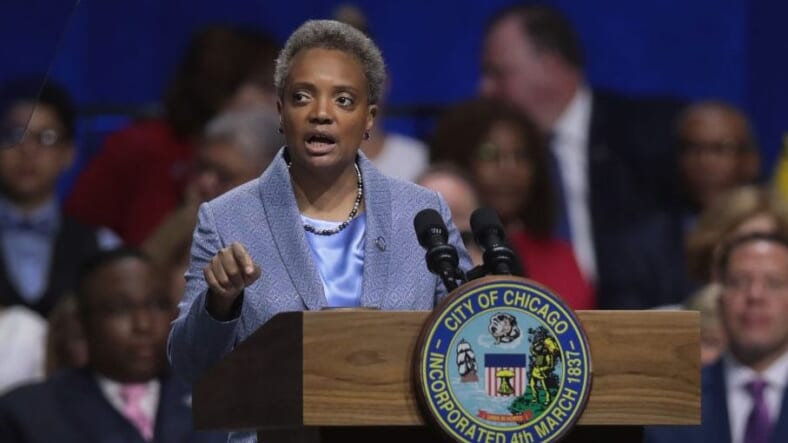 Over the last week, hilarious memes of featuring stony-faced Mayor Lori Lightfoot making appearances at Chicago hotspots have gone viral all over the internet, and she has something to say to everyone whose been sharing them.

“I’ve been getting them from people all over the city … all across the country,” Lightfoot said during a press conference Monday afternoon.

Her thoughts on being a meme?

“I think this is a very difficult time and people are afraid, the stress levels are high and like in any difficult time, I think we need to have a sense of balance, and humor is part of it.”

“We’ve acted out a few in my household at night, which I’ll keep to myself,” Lightfoot said.

“But I think what it shows is the creativity of people in this city … that despite these dire circumstances, and this virus is deadly serious, that we can also see the lighter side of life … so, I love ‘em.”

According to the Chicago Sun-Times, “The first version was posted Friday by 27-year-old Danny Martinez, one day after the mayor closed the lakefront — along with all adjacent parks and beaches — as well as the 606 trail, Millennium Park and the downtown Riverwalk.

“Part of the reason I did it is to spread awareness, like, ‘Yo, you guys need to stay inside, this is not a joke.’ But at the same time, bring some humor to the chaos that’s going on,” he said.

Lightfoot said Thursday she had no choice but to shut down Chicago’s most popular spots after large crowds were seen gathering in those locations on Wednesday, a “blatant violation” of Gov. J.B. Pritzker’s stay-at-home order.”

In another now-viral post, the mayor is shown standing in front of police barricades blocking the lakefront trail from rule-breakers. In other variations, her glaring is directed at a jogger or has her perched on top of a police car.

Check out some of the other memes below.

You either die a hero or live long enough to see yourself become the villain. Photography by: @creatively_focused

Been having the most fun playing #whereslightfoot all day today. @chicagosmayor is just the little angel on our shoulder Chicago needs to keep us motivated to stay home and save lives! Hope everyone is safe and healthy and staying in! ? #stayhomesavelives #chicago @whereslightfoot #coronamemes