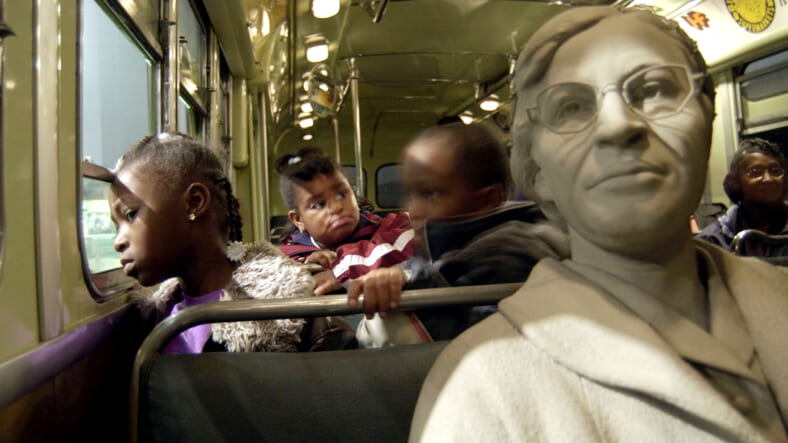 Aja Robertson, 7, looks out the window of the Rosa Parks bus exhibit at the National Civil Rights Museum January 19, 2004 in Memphis, Tennessee. The museum’s attendance swelled to about 9,500 visitors on Martin Luther King Day. (Photo by Mike Brown/Getty Images)

Protesters taking to the streets to complain about coronavirus response measurers by state governments are being compared by one Trump administration official to Rosa Parks.

White House adviser and conservative commentator Stephen Moore evoked Parks, the mother of the movement for civil rights, in voicing his support for the right-wing citizens who gained national attention for their disregard for social distancing mandates and business closures intended to stop the spread of the deadly COVID-19 disease.

“I call these people modern-day Rosa Parks. They are protesting against injustice and a loss of liberties,” the Washington Post reported.

“So this is a great time, gentlemen and ladies, for civil disobedience,” said Moore, as scribed in a New York Times piece. “We need to be the Rosa Parks here, and protest against these government injustices.”

He also told CBS News it’s “interesting to me that the right has become more the Rosa Parks of the world than the left is.”

Moore is also part of the “Save Our Country” coalition, which features conservative leaders who are also against the government-ordered business shutdowns to stop the contagion from overwhelming hospitals during a global pandemic.

The Michigan Conservative Coalition, also known as the Michigan Trump Republicans, organized more than 1,000 protesters who flocked to the state capitol to voice their displeasure for Democratic Gov. Gretchen Whitmer’s stay-at-home orders, The Guardian reported. Some of them were armed with rifles and assault weapons, waved MAGA flags and promoted messages in support of Trump, demanding the opportunity to return to work.

The agitators yelled “recall Whitmer” and “lock her up,” hearkening back to rally cries of Trump’s base in the 2016 election, according to MLive reporter Malachi Barrett.

Chants of “recall Whitmer,” “USA” and “lock her up” outside Michigan Capitol. #OperationGridlock pic.twitter.com/7Q7niiNFUF

When people like Stephen Moore make comparisons to Ross Parks we should treat it as the cynical, calculated form of race baiting that it is. Enslavers said *they* were in fact the slaves. Segregationists adopted Civil Rights mvmt language to fight policies to help black people.

In other words, the decision to invoke Rosa Parks is intended to evoke outrage while simultaneously obscuring the real racial and economic injustice people are facing and delegitimize both the legacy of the civil rights mvmt and the ongoing struggles. We should give this NO AIR.

Among them was Daily Beast columnist Max Burns who wrote: “Stephen Moore is one of the least qualified people in America to speak on Rosa Parks.”

Stephen Moore is one of the least qualified people in America to speak on Rosa Parks. https://t.co/66FPaTyFe9