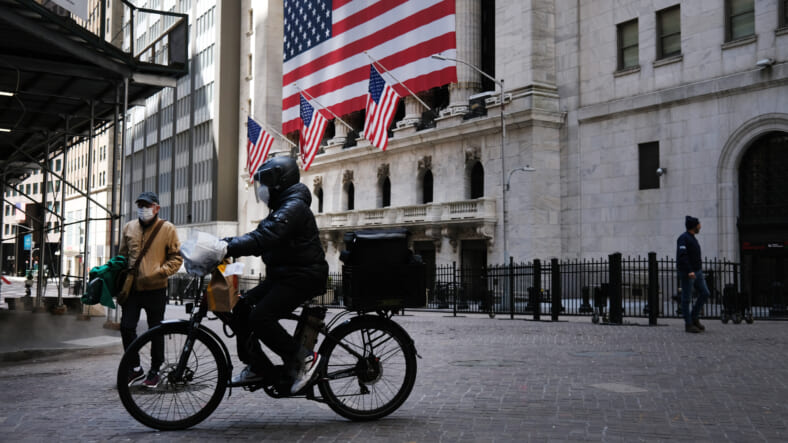 A person rides a bike down Wall Street on April 02, 2020 in New York City. (Photo by Spencer Platt/Getty Images)

More than 50,000 have died of complications, more than 939,000 individuals have tested positive for Covid-19 and tens of millions are out of work.

However, according to Fast Company, billionaires are benefiting during the pandemic. Since the pandemic intensified in the United States last month, billionaires have seen their fortunes grow collectively by 10%, or an estimated $282 billion.

In that same timeframe, investors watched the stock market fall off a cliff and government officials counted more than 26 million Americans who filed for unemployment claims in the past five weeks.

For instance, the two who have benefited most from the pandemic are Amazon and Zoom Video Communications. After witnessing his wealth drop to $105 billion in mid-March during the initial stock market crash, Amazon head Jeff Bezos‘ net worth has grown $25 billion this year. Zoom CEO Eric Yuan, one of few not affected by the said crash, watched his net worth climb to $2.58 billion, Fast Money reported.

With many states given stay-at-home orders, Zoom has been the app of choice when it comes to online communication for meetings and video podcasts. Consumer demand on Amazon surely has spiked as countless retailers closed stores to help in the fight against the fast-spreading virus.

A major contributing factor to the rise of billionaires’ earnings has been tax cuts in recent decades. According to a report by the progressive think tank Institute of Policy Studies, taxes on the highest earners in America have dropped 79 percent over the past 40 years.

Chuck Collins, the institute’s director of Program on Inequality and the Common Good, said much of the money billionaires could’ve paid in taxes may have helped contribute to the pandemic.

“We’re reading about benevolent billionaires sharing .0001% of their wealth with their fellow humans in this crisis, but in fact they’ve been rigging the tax rules to reduce their taxes for decades — money that could have been spent building a better public health infrastructure,” Collins told Fast Money.