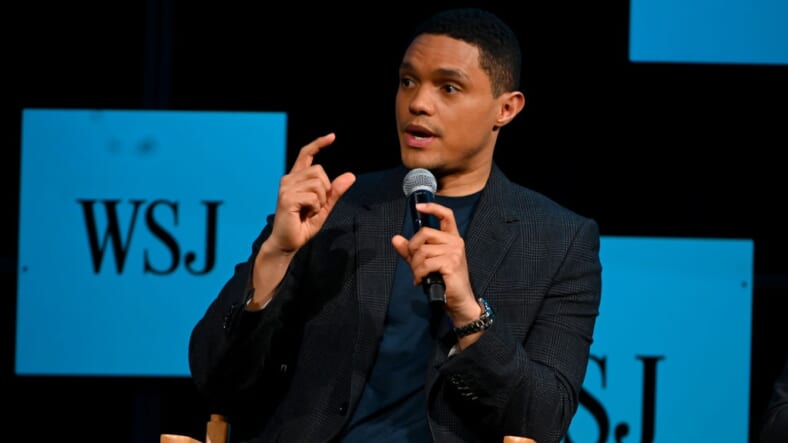 Trevor Noah is amongst a group of celeb producers that are teaming up to bring the story of a homeless, 8 year-old Nigerian chess prodigy to the big screen. (Photo by Nicholas Hunt/Getty Images)

Trevor Noah is one of many comedians working on their late-night talk shows from home during the coronavirus pandemic.

The pandemic idled studio production of Comedy Central‘s The Daily Show, which Noah hosts on weeknights, and the studio crew was furloughed. Crew members, however, continue to receive paychecks, thanks to Noah’s generosity.

According to Variety, a source close to the production stated that the Emmy-award winning TV host is coming out of pocket to pay 25 stagehands their salaries, including camera operators, audio technicians and stage managers, among other in-studio personnel.

“He respects his crew tremendously and feels it’s only right that they get through this together,” the source told the entertainment magazine. “These are the people who have been on the show with Trevor from day one and help him put on the show.”

Some production staff, such as writers and producers, are still contributing to the show remotely. The satire show is now dubbed The Daily Social Distancing Show with Trevor Noah to encourage government-mandated practices intended to preempt the spread of COVID-19.

The Daily Show, which is currently the top-rated late-night show in the 18-34 demographic, suspended studio production in mid-March 13 as the health crisis began to take its toll on the United States. Taping resumed later that month from Noah’s New York apartment.

The Daily Social Distancing Show with Trevor Noah will expand from its normal 30-minute program to a 45-minute telecast starting Monday.