Detroit chefs unite to make 20,000 meals for the city’s homeless shelters in efforts to combat COVID-19

With restaurant dining rooms closed to the public, Detroit chefs took their talents to a community kitchen in the city 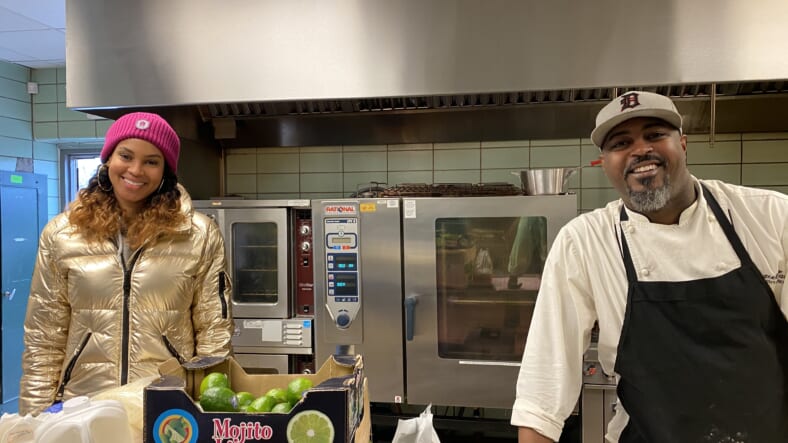 Stephanie Byrd (left), of The Block and Flood’s Bar & Grille in Detroit, and Chef Maxcel Hardy (right) of “Too Many Cooks in the Kitchen for Good”

The coronavirus pandemic has forced scores of restaurants to close across the country.

Given the health crisis, several chefs in Detroit are using their gifts to feed the city’s homeless.

Celebrity chef Maxcel Hardy, who idled his COOP Caribbean Fusion restaurant in Detroit’s Midtown area, continues to cook for his fellow Detroiters. He took his talents to the Horatio Williams Foundation kitchen to feed families living in shelters, as reported by WDIV-TV.

And Hardy is not alone. The Detroit native teamed up with other award-winning chefs in the city to pay it forward during a tragic period for the Motor City.

“We’re just trying to do what we can to make sure that we take care of most vulnerable folks here in Detroit, that being our homeless population,” said Hardy, a lifelong resident.

Hardy said in an Instagram post last week the efforts have produced more than 20,000 meals in 33 days.

Metro Detroit is one of the hardest-hit areas by the coronavirus crisis. out of 43,200 COVID-19 diagnoses in the state of Michigan, a majority of cases were found in the three counties surrounding Detroit. More than 8,500 residents in the majority Black city have tested positive of the deadly disease.

Detroit is beset by persistently high poverty rates. Hardy and his confidants recognized that the city’s homeless population is even more vulnerable to catching the virus.

“If you’re malnourished and you’re not eating right, you’re not going to have a fighting chance against COVID-19,” Hardy said.

The Horatio Williams Foundation kitchen has fed more than 9,000 people so far, averaging around 400 per day. The kitchen operates on weekdays.

The Horatio Williams Foundation stocks it kitchen by receiving food donations and recovery efforts from restaurants, warehouses and distributors. Culinary students are also volunteering at the center.

Hardy and his fellow chefs attribute the city’s fighting spirit as the inspiration for this selfless act of kindness.

“It goes to who we are as Detroiters, because we know if nobody else will do it and look out for us, we look out for ourselves,” he said.