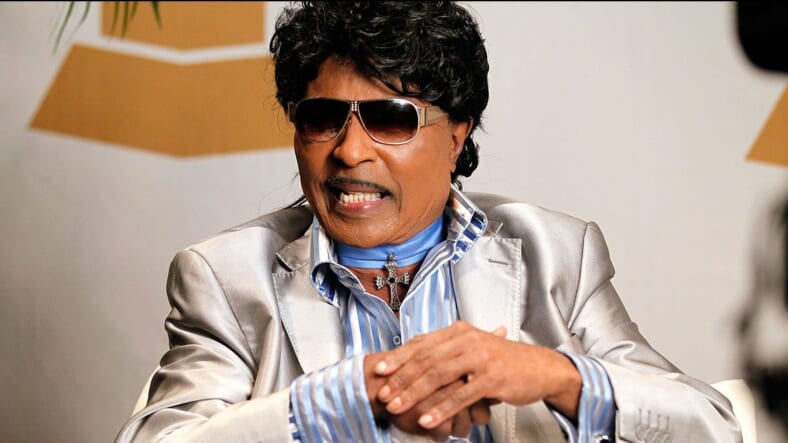 Little Richard, the ‘originator’ of rock ‘n’ roll whose music career spanned seven decades, has died at the age of 87, according to his son.

Daniel Penniman confirmed the news of his father’s Saturday morning death, Rolling Stone reports. The cause of death is unknown at this time.

Every thing that rock and roll became notorious for — flamboyance, sexual androgyny, reckless on-stage abandon — was borne by Little Richard in the 1950s. His hits like “Tutti Fruitti,” “Good Golly Miss Molly” and “Lucille” became music standards, thanks to his powerful singing voice and his virtuoso piano playing.

Born Richard Penniman, Dec. 5, 1932, Little Richard was raised in the church in his native Macon, GA. He left home at the age of 13 due to his father’s disapproving of his love of secular music and accusing him of being a homosexual. From there he stayed with a local family, befriended Otis Redding and signed a record deal in 1951 after winning a local talent show.

Musical guest Little Richard during a performance on The Tonight Show on June 6, 1994 — (Photo by: Margaret Norton/NBCU Photo Bank/NBCUniversal via Getty Images via Getty Images)

The contract did not lead to hits, and Richard was washing dishes a few years later. However, he hit pay dirt after sending a demo of “Tutti Fruitti” to Specialty Records in Chicago. The song became a smash in 1955.

Little Richard set the music business on fire the next few years with a string of hits like “Long Tall Sally” and “Rip It Up.”

Richard retired at the height of his success in 1958, vowing only to perform gospel music after dreams and premonitions of his demise. He became an ordained minister and released spiritual albums until returning to secular music in 1964.

Although he’d never again reach the high-charting success of the 1950’s, his influence on artists had secured his place in music history. He employed both young Elton John and Jimi Hendrix during this era, who each certainly used Richard’s example to bolster their own individual flamboyant sense of style and artistry.

The world’s most popular band, The Beatles, were Little Richard devotees, covering songs like ‘Long Tall Sally,’ ‘Kansas City/Hey Hey Hey’ and even fashioned an original, ‘I’m Down,’ after the vocal styling of their idol.

In 2000, a made for TV biopic on Richard was made, starring actor Leon as the lead, with Robert Townsend directing. It was a success among viewers and critics alike, receiving Emmy and NAACP Image Award nominations.

Little Richard knew his legacy had been under attack from appropriation from the very start, when Pat Boone concurrently covered his songs for the popular white audiences. The whitewashing of his music only made him more artistically indignant in his recording, performing and confidence.

In fact, it was his braggadocio that became more of a calling card for future generations than of his actual hit songs of old.

Little Richard is arguably the first unapologetically Black American superstar. The bravado and confidence he exuded in every interview, every recording session, every raucous stage show had scarcely been seen before his time, but is imprinted on so many since him.

His sense of his own innovation and importance can be seen every time Kanye West calls himself a genius. When Janelle Monae first burst on the scene in her black and white tuxedos, her androgynous image could have never been so accepted if not for Little Richard’s fearless desire to be the prettiest performer around.

Dave Chappelle was once quoted, ‘the true mark of greatness is when everything before you is obsolete and everything after you bares your mark.’ Little Richard embodied that notion to its upmost zenith. There was no such thing as rock and roll before him, and artists today can’t been seen without seeing a piece of him shine through somewhere, somehow.