Senate Majority Leader says on a fundraising call to members of the GOP, 'I think President Obama should have kept his mouth shut' 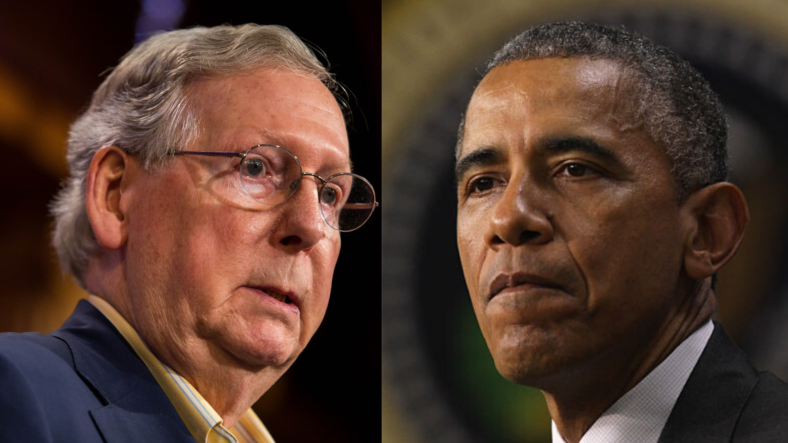 “I think President Obama should have kept his mouth shut.”

The comments were captured by a number of sites who sat in on the call including The Hill during an online fundraiser organized by the current president’s son, Eric Trump. During Lara Trump‘s online fundraiser on Monday night, McConnell continued, “You know, we know he doesn’t like much this administration is doing. That’s understandable. But I think it’s a little bit classless frankly to critique an administration that comes after you.”

US President Barack Obama (L), is flanked by Senate Majority Leader Mitch McConnell (R-KY) during a meeting with Senate leaders, and leaders of the Senate Judiciary Committee, to discuss the vacancy on the U.S. Supreme Court in the Oval Office at the White House, February 1, 2016 in Washington, DC. (Photo by Mark Wilson/Getty Images)

Obama has stayed largely quiet even among a global pandemic that has killed more than 70,000 Americans. In a call with Obama Alumni Association, the former president advocated for his former staffers to endorse and engage supporters to rally for Joe Biden.

He said, “This election that’s coming up — on every level — is so important because what we’re going to be battling is not just a particular individual or a political party,” Obama said. “What we’re fighting against is these long-term trends in which being selfish, being tribal, being divided, and seeing others as an enemy that has become a stronger impulse in American life.”

The former president urged his supporters to advocate for the Biden campaign saying, “That’s why, I, by the way, am going to be spending as much time as necessary and campaigning as hard as I can for Joe Biden.”

The Senate Majority Leader said he didn’t think it was “appropriate” for a president who had left office to critique another president.

“You had your shot. You were there for eight years,” McConnell added, “I think the tradition that the Bushes set up of not critiquing the president who comes after you is a good tradition.”

Video of McConnell’s comments can be found here.