Opinion: In these current times of uncertainty, our communities are calling out for Black women to put our capes on again. 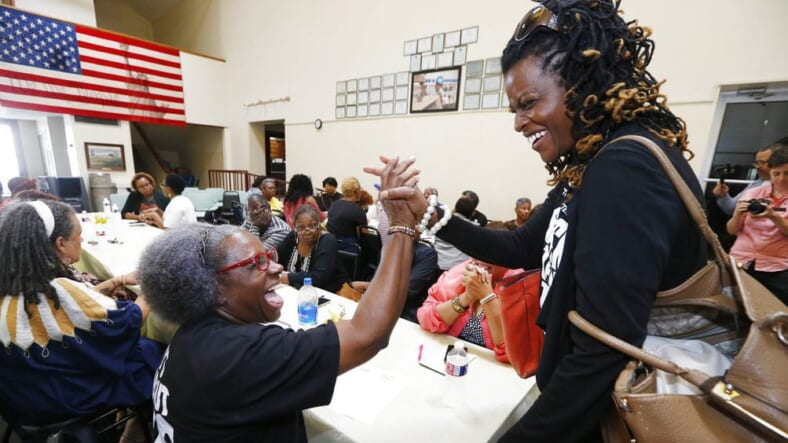 In this Aug. 24, 2018 photo, Cassandra Overton Welchlin, cofounder of the Mississippi Women’s Economic Security, right, gives Betty L. Petty, of the Sunflower County Parents and Students United, a “high five” during a meeting at the MACE headquarters of Mississippi Delta grassroots organizers and the Black Voters Matter Fund field team members, as part of a bus tour of the Delta. (AP Photo/Rogelio V. Solis)

As I sit here writing this on #MothersMonday — a day that honors working moms on the Monday after Mother’s Day—I’m tired.

Not tired because I am, in fact, a working mom juggling “distance learning” with my teenager 50 days into this stay-at-home quarantine. Rather, I’m tired because I am being forced to make sense of the senselessness for my 13-year-old son, and for myself, yet again.

I’m tired of posting messages on my social media, like “I can’t keep calm, I have a Black son” or using the “#Justicefor” hashtag du jour to express my outrage over the latest murders of innocent unarmed Black men. And yet, here I am again, speaking two new names out of respect for their existence and as a reminder that their lives did – and still do- matter.

The recent release of the videos documenting the tragic fatal shootings of Ahmaud Arbery, of southwest Georgia, on Feb. 23 and Dreasjon “Sean” Reed, of Indianapolis, on May 6, has left the country outraged, frustrated, and protesting for the lack of justice.

READ MORE: 2020 election should be entirely vote-by-mail, most Americans say

In 2020, we are still being victimized by racism and bigotry. When the perpetrators are caught (often on camera), our children are often victim-blamed and their characters are assassinated by the media, the public, and the defense attorneys. Any and every trick in the book is used to attempt to justify why it’s fine that jogging, driving, eating ice cream in our apartments or wearing a hoodie sweatshirt while walking unarmed can result in cold-blooded murder.

That’s why I’m calling on all my sisters to take action. Don’t just #RunforMaud—run for elected office! During these unprecedented times of historic unemployment and economic upheaval, help get out the vote and elect women to guarantee our seats at the table. Our children need you. America needs you. Again. 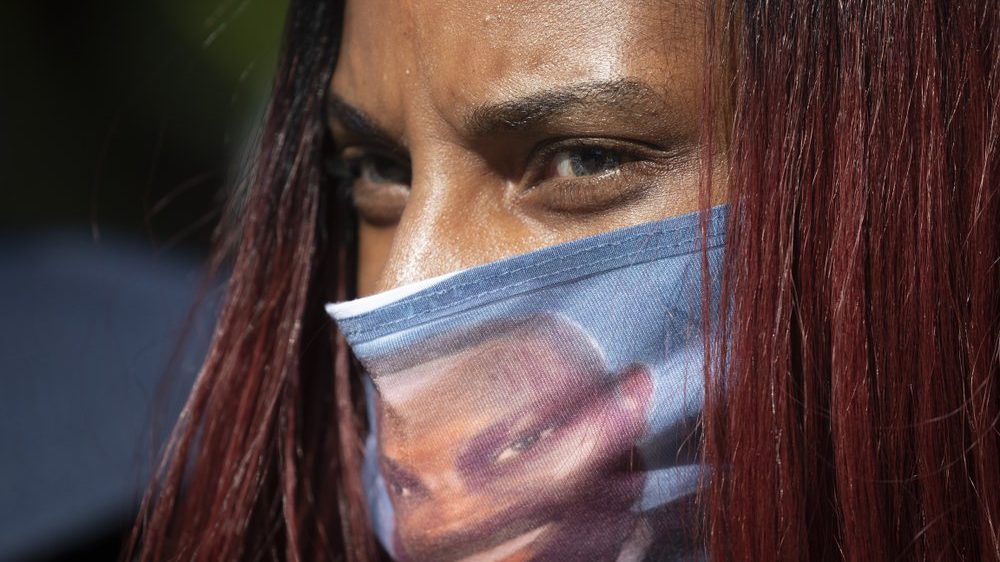 A woman wears a face covering with the likeness of shooting victim Ahmaud Arbery printed on it during a rally to protest Arbery’s killing Friday, May 8, 2020, in Brunswick Ga. (AP Photo/John Bazemore)

For generations, Black women have been solutions-oriented sheroes in the war for equality. From battles over voting rights to criminal injustice, we are veterans. In these current times of uncertainty, our communities are calling out for us to put our capes on again.

In times of crisis, Black women have historically been the great stabilizers in this country. We have always worked to identify solutions and solve pressing issues. In times of crisis, we have been the mothers to the motherless and friends to the friendless. We have joined forces with diverse coalitions in fighting for a better tomorrow for others as well as ourselves. Black women and all women of color must step up to vote, run and lead.

Now, in the midst of this COVID-19 global pandemic, we have a painful reminder that leadership matters and it matters who leads. Our country needs strong, moral, compassionate, and empowered women of color to lead us forward. We must work strategically to ensure Black women and women of color, especially mothers, have more seats at the tables of power. Not seats just for when critical decisions are being made, but as elected frontline workers reimagining a new way of doing democracy. Black women, in particular, must step up and run for elected office if we are ever to see a just system.

Since the pandemic struck, our nation’s glaring social and economic disparities have been exposed like never before and can no longer be denied or ignored. In healthcare, we have seen how a lack of coverage and limited access to quality facilities in minority communities have contributed to an overburdened system. We have witnessed first-hand the chronic healthcare issues Blacks are disproportionately affected by, such as hypertension, cardiovascular disease, and diabetes.

In education, the digital divide has been on full display as many Black, Brown and low-income households lack access to computers, adequate materials, and reliable internet service for their schools’ distance learning. Since many businesses are still closed, employees from the public and private sectors are being fired, laid off, and furloughed. As the national unemployment rate soars past 20 percent, the burden will fall heaviest on distressed communities. Women of color, in particular, will be hit the hardest in this “She-cession,” according to The New York Times. 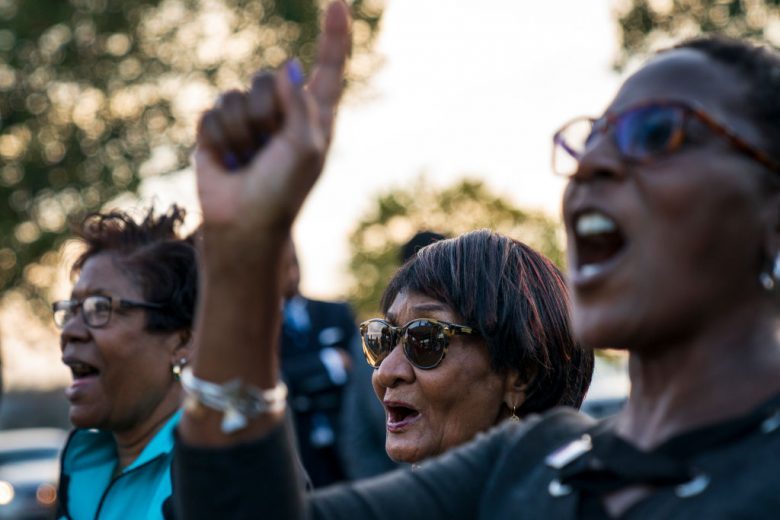 The Center for American Progress (CAP) showed that 52 percent of essential workers are women and 67.5 percent of Black mothers are the primary or sole breadwinner of their homes. As the primary heads of household, more and more female-led minority families are struggling even more to find food to put on the table – especially in food desert communities.

For these reasons and so many others, I’m asking Black women and all women of color to dig deep, rise-up and run for elected office.

In 2018, voter turnout for women of color surged to more than 15 percent over the previous midterm election of 2014, the Center for American Progress. These numbers place Black women at the center of voter engagement and mobilization, positioning them as a force to be reckoned with in the 2020 election.

READ MORE: How Black voters can shape the 2020 election by downloading one app

As this year’s Mother’s Day flowers wilt and the cards get placed into a drawer, I urge Black women and mothers to exercise those superpowers once again by committing to running for office and electing women of color at every level. Let’s continue to mobilize around sisters with interests like ours. Start here, and start now. Run as you are. We are waiting to help you with open arms.

As the co-founder of Vote Run Lead, and the national co-chair of social action for Delta Sigma Theta Sorority, Inc., I am proud to work alongside these organizations everyday to help equip women like you to run for office and win. We’ve trained thousands of women to run for elected office because more women, and women of color in government creates a stronger democracy. We are on a mission to make it happen, and we’ll be there for you every step of the way. I see it happening and I know that together, we can win.

Let’s exercise that growing political power in this 2020 election. We need it to change gun laws — and save our Black sons’ and daughters’ lives. We need them to ensure that adequate resources are being equitably distributed in our communities — and save whole economies. We need leaders and people who are concerned about community health and safety – not just money – to save the future.

We need them to show our girls that when women lead, better outcomes are often created for the good of the whole, not just a few. As of today, we are less than six months away from election day. And our country needs the leadership of women like you. The time is now. Run sisters, run.

Rhonda Briggins is pictured in a headshot.

Rhonda Briggins, Co-Founder and Board Member of Vote Run Lead.