A lawsuit accuses four white St. Louis cops of brutalizing Marvia and Derek Gray after wrongly accusing them of stealing a TV

Marvia Gray alleges she suffered serious and permanent injuries during her arrest at a Sam’s Club store in Des Peres, Missouri, on March 23. Her 43-year-old son, Derek, suffered a concussion, three shattered teeth and other injuries, according to the lawsuit.

Andrew M. Stroth of the Chicago-based Action Injury Law Group said Marvia Gray was especially traumatized by how her son was treated given other high-profile incidents involving white officers and black men, including the fatal shooting of Michael Brown in Ferguson, Missouri, another St. Louis suburb, in 2014.

“Mrs. Gray thought her son was about to be another black man unjustifiably shot and killed by the police,” Stroth said in a phone interview. “You can see in the video that she is terrified with respect to what they’re doing to her son.”

Onlookers in the store captured cellphone video. Two videos that Stroth provided to The Associated Press begin with Gray and her son already on the ground.

At one point, Derek Gray tries to sit up but two officers forcefully push him back down. He can be heard yelling, “Get off me,” “Please let me go,” and, “I’m humiliated.” His mother screams throughout the approximate four-minute videos, several times imploring officers, “Please leave me alone!”

The city’s public safety director has reviewed reports and video and “unequivocally denies that the officers used excessive force to ‘beat’ the plaintiffs,” Harms said.

Derek Gray lives in Virginia and works in security. His mother is in frail health with osteoporosis, rheumatoid arthritis, glaucoma and other ailments, Stroth said, so Derek Gray took leave from his job to care for her at her home in Creve Coeur, Missouri, another St. Louis suburb.

At the Sam’s Club, Derek Gray purchased a 65-inch Sony Bravia flat-screen TV for his mother, along with other items, Stroth said. When they got to his SUV they realized everything wouldn’t fit, so Derek Gray asked the store to hold the TV until he could return later and pick it up.

The trouble began when he went back to the store. At first, the lawsuit said, someone at the store expressed suspicion that Gray was trying to steal the TV. A store employee interceded and confirmed that Gray had paid for the TV and was there to pick it up.

Still, a Des Peres officer who was in the store followed Gray to the SUV and accused him of theft before being told by an employee that Gray had bought the TV, the lawsuit said.

Gray returned to his mother’s home and told her about the false accusations. They decided, based on how he was treated, to return the TV and get their money back.

The lawsuit said that while the Grays were at the store seeking a refund, four officers “violently and physically seized Marvia Gray and Derek Gray, throwing them to the floor, beating them, handcuffing them, then arresting them.”

The lawsuit said the officers acted without cause or adequate provocation, but provides no other details. Police Capt. Sean Quinn declined comment, citing the pending litigation.

Marvia Gray said at a news conference that she watched in terror as the officers attacked her son. 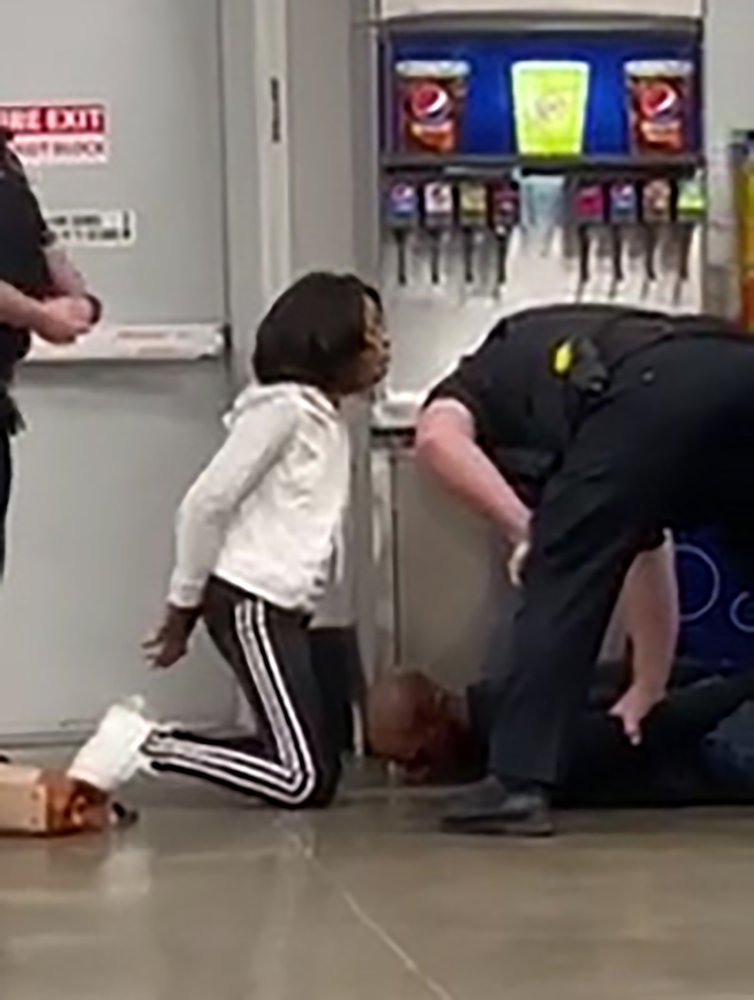 In this March 23, 2020 frame grab taken from video, Marvia Gray, is seen on her knees, while her son Derek Gray is seen face down as they are arrested at a Sam’s Club store in Des Peres, Missouri. ( Photo courtesy Action Injury Law Group via AP)

John Bowman, president of the St. Louis County chapter of the NAACP, accused the officers of “bullying.”

“In St. Louis and in the United States, when a black person interacts with a white police officer, the immediate concern is: Will he be treated with respect, or will they be allowed to make a call safely, or will they be harassed, beaten and killed because of the color of our skin?” Bowman said.

Marvia Gray was charged with municipal crimes of interfering with an officer and resisting arrest. Harms said the St. Louis County prosecutor’s office is still reviewing whether to file charges against Derek Gray.

The lawsuit said Marvia Gray suffered injuries to her tailbone, back, shoulder, knees and arms. Her son’s injuries included an open head wound that required stitches and metal staples, the lawsuit said.