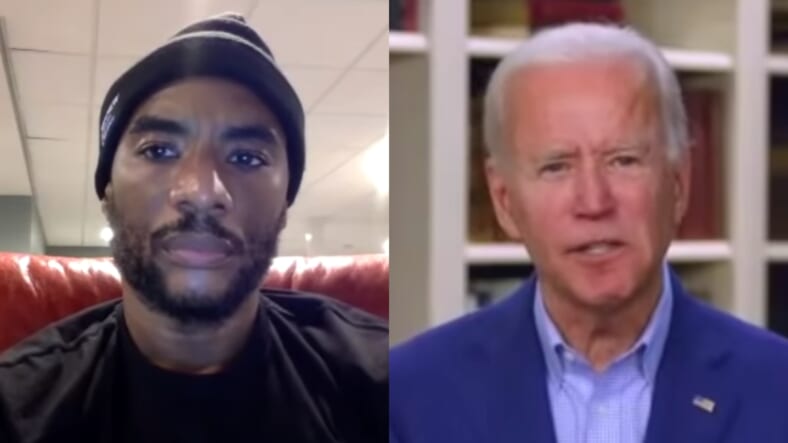 In a cringe-worthy blunder on The Breakfast Club, Democratic presidential hopeful, Joe Biden implied that African Americans who are considering voting for Donald Trump, “ain’t Black.”

The remark came near the end of an interview with Charlamagne tha God, who for over 18 minutes, questioned the former vice president on his record, his running mate, and his plans for Black America.

As an aide tried to wrap up the interview, Charlamagne said, “It’s a long way until November. We’ve got more questions.”

It was then that Biden replied, “You’ve got more questions? Well, I tell you what, if you have a problem figuring out whether you’re for me or Trump, then you ain’t Black.”

Charlamagne didn’t miss a beat when he shot back, “It don’t have nothing to do with Trump, it has to do with the fact [that] I want something for my community.”

Biden tried to explain his record on civil rights and boasted of having the support of the NAACP, but the interview still came off as contentious.

Throughout, Biden seemed to respond to questions with a colloquial casualness, often saying things like, “Come on, man.”

He stated that the Black Caucus supported the bill at the time. He pointed out what he contends are the positive points of the bill including the Violence Against Women Act, the creation of drug courts, and the assault weapons ban.

The Democratic presidential candidate explained that there were elements of the bill that he didn’t support including three strikes and mandatory sentencing. Biden stated that the bill did decrease crime in America in the 90s. However, he also said that as president, he would be focused on moving the American prison system from punishment to rehabilitation.

There are various theories on whether or not the bill truly decreased crime, as well as if it increased mass incarceration. However, it was a significant factor that dogged Hillary Clinton throughout the 2016 election.

Katrina Pierson from the organization, “Blacks Voices for Trump” did not appreciate the vice president’s remarks. She immediately posted her response on Twitter, contending that the 77-year-old believes that Black people are “incapable” of thinking for themselves.