Peaceful protest turns violent, ending with at least two protesters shot in the head by cops 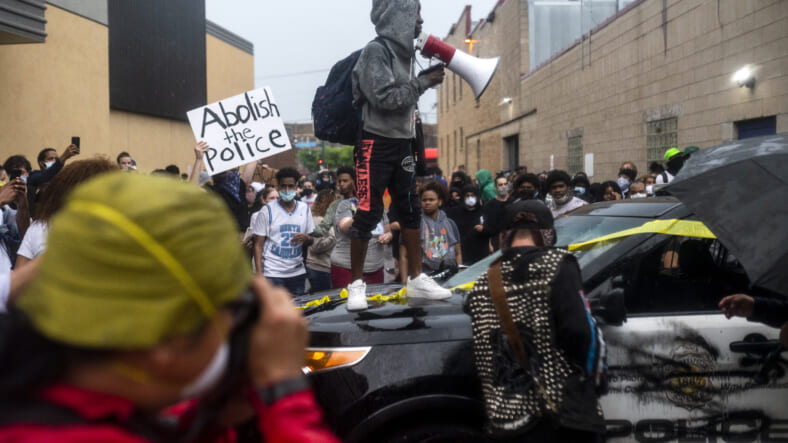 Protesters demonstrate against the death of George Floyd outside the 3rd Precinct Police Precinct on May 26, 2020 in Minneapolis, Minnesota. (Photo by Stephen Maturen/Getty Images)

A protest in response to the police killing of a Black man in Minneapolis turned violent on Tuesday night.

Thousands of protesters showed up at the intersection of Chicago Avenue South and East 38th St. around 5 p.m. to voice peaceably their anger over the senseless death of George Floyd.

Within hours, a memorial in front of the Cup Food store was organized by the community, where leaders and activists were tapped to speak.

Scenes from the protest where #GeorgeFloyd died after being detained my Minneapolis Police. pic.twitter.com/CjdgRMtE5u

According to WCCO, the local CBS affiliate, a man who stated that he was a witness to the event also spoke.

The reports further state that most of the protesters were even wearing masks and trying to maintain social distance as they gathered amid the coronavirus pandemic.

At 6 p.m., the protest then turned into a march where participants walked from the market toward the 3rd Precinct, where the officers were thought to have worked. The tone was solemn yet energized, peaceful yet intentional.

More insight of the protest
The minnesota community really came together for #GeorgeFloyd ❤️
We need justice for him and the mayor of Minneapolis can throw away that pitiful letter.

Arrived at the precinct. The door has been smashed and protest signs left outside #georgefloyd pic.twitter.com/CmrDdT97vh

It was then that the tone of the protest changed.

Footage from the protest outside Minneapolis PD’s 3rd Precinct and the march to demand justice for #GeorgeFloyd pic.twitter.com/Bu9fffwGIy

The news stated that a smaller group began to vandalize police cars and spray paint on the building, and police responded by deploying in riot gear firing tear gas and rubber bullets.  But depending on whose report you believe, the police became aggressive before the vandalization started.

Lots of violent images being shared, this is the protest before cops fired gas. They hired the first shot. Not us. But they dont hear us when we march so we fight back. #GeorgeFloyd #BlackLivesMatter #Minneapolis pic.twitter.com/jCwsu3D6QY

What do the cops of @MinneapolisPD do when a peaceful protest happens? They drop tear gas. Downright embarrasing. #GeorgeFloyd #AllLivesMatter #BlackLivesMatters pic.twitter.com/2WvPa9vCkJ

“I got on my knees and I put up a peace sign and they tear-gassed me,” another protester said.

Carlos Gonzalez, a photojournalist for the Minneapolis Star Tribune, posted heartbreaking photos of the fallout after the aggressive police response. One woman is seen with her face covered in milk as someone tries to help her get tear gas out of her eyes.

The scene at the Minneapolis 3rd Police Precinct. pic.twitter.com/ykxsfPn8PD

Star Tribune reporter Andy Mannix posted that he was shot in the thigh with a large rubber bullet.

I Was just shot with this in the thigh. pic.twitter.com/igcJ3e7iQ4

Tweets out of Minneapolis are saying that multiple people were struck in the head with the rubber projectiles: one Somalian woman and another a white man. There is no word on the condition of their injuries.

A women was shot in the head by a rubber bullet during the protest of George Floyd?? pic.twitter.com/mpRD1jZ9zJ

Minneapolis #protest live footage. Police have barricaded themselves in the department and have been firing teargas and firing at protestors amid murder of #GeorgeFloyd pic.twitter.com/A1L0e3ilmW

A man at the #GeorgeFloyd protest was allegedly shot/hit by the Minneapolis police. Prior to this, everyone was getting tear gassed and maced. pic.twitter.com/Jw0fqGriqm

Tensions were high and many were too impatient to wait for justice to manifest. Some protesters have even tweeted out the home address of former MPD officer, Derek Chauvin, that perpetrated the crime against Floyd.

They showed up to the killers cops house. This is exactly where everyone should be. #BLM #BlackLivesMatter #GeorgeFloyd #MPD #Protest #WECANTBREATHE #OSINT #DerekChauvin #Minneapolis #MinneapolisPolice #MinneapolisPD pic.twitter.com/aRPW5Ym4N2

Others arrived at the protest armed and ready for confrontation. Here a participant observed a white man with a gun holding a sign that read “Justice for George.”

On the opposite side of the spectrum, there was a white man with a gun who attendees said had intentions to shoot into the crowd. The presumed vigilante was instantly subdued and disarmed.

Crazy how so white male tried to shoot up the #GeorgeFloyd #BlackLivesMatters #JusticeForGeorgeFloyd protest this is outta hand pic.twitter.com/geWWRFsd8e

George Floyd was killed on Monday evening as police attempted to detain him and an officer pinned him to the ground with a knee on his neck for over eight minutes. Police claim that Floyd was a suspect in a forgery, attempting to pass a fake $20 bill.