In an exclusive interview with theGrio, Jean-Pierre talks Biden's chances of picking a Black woman as his VP and running an election amid coronavirus 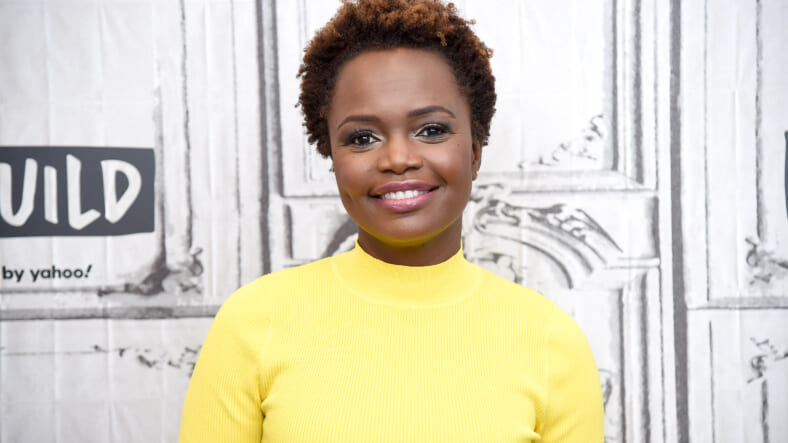 “I’m the worst at saying great things about myself. Goodness gracious oh man. I’m the worst at that,” says Karine Jean-Pierre, the newly hired senior advisor to Joe Biden‘s presidential campaign, when I ask her to describe herself.

“Being in front of a camera speaking up, if you read my book (“Moving Forward“) I’m actually kind of shy. If you came to me 10 years ago to be on TV I would have gone running,” Jean-Pierre tells theGrio as she laughs as in the same sing-song pitch that betrays confidence yet humility at the same time.

Jean-Pierre is known by almost everyone in the political and media Acela train corridor from Washington to New York. It’s hard to miss her striking resemblance to Lupita N’Yongo, as she’s been seen in dozens of political photos from her time in the Obama White House and MoveOn.org. 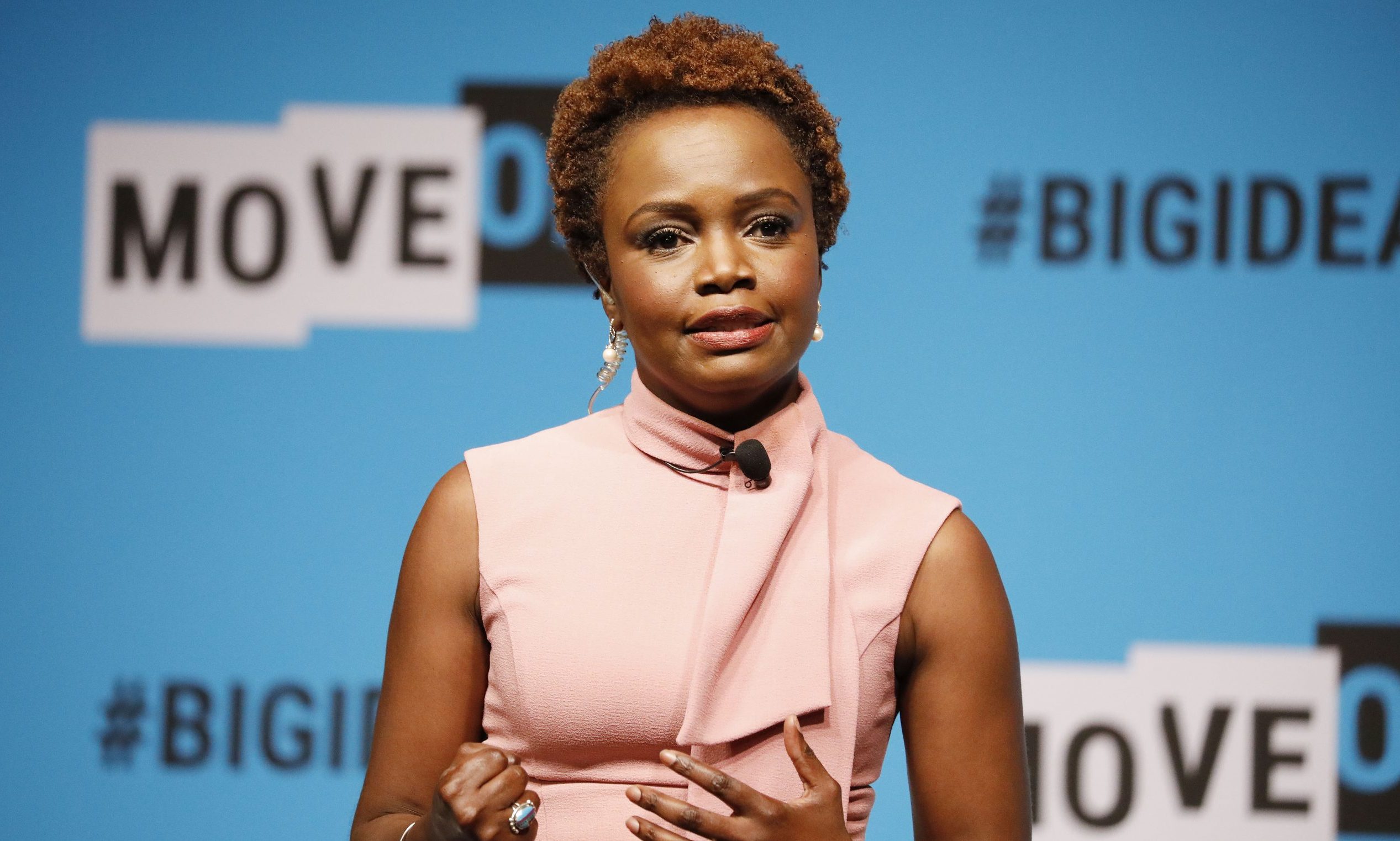 She wrote a best-selling book that most people, even those close to her, didn’t know she was writing and, until leaving to join team Biden last week, was a regular guest alongside powerhouse MSNBC hosts like Nicolle Wallace and Joy-Ann Reid.

Why does she want to give all of that up to be part of the grind of a 24-hour presidential campaign during a global pandemic? We decided to find out.

In the interest of transparency, I have known Karine Jean-Pierre for years. We first met at a birthday party in Atlanta for a CNN colleague years ago and have traveled in the same political and media circles for years. Back in 2019 P.P.T. (Pre-Pandemic Times) we’d often catch each other in network green rooms or impromptu brunches after Sunday shows.

But I’ll admit I didn’t know the full extent of her political résumé. She has a reputation for being effective behind the scenes, convincing people of the right moves without causing a fuss, and putting combative forces at ease with a smile.

Don’t let the smooth taste fool you though, Karine speaks softly but had been known to throw elbows when the need arises; her short stint as the personal Dora Milaje for Senator Kamala Harris during the She the People conference last year went viral.

I asked her what it will be like transitioning a back-slapping, hugging baby-kissing retail politician like Joe Biden into a virtual campaign due to COVID-19 and she admits, that’s a big part of her challenging new job.

“One of the good things is that people are home. It is probably easier [For Biden] to get in touch because voters are consuming information a lot more than they have in the past. It is not perfect,” she says.

“Also, you can be anywhere around the country phone banking. I’m coming out of  MoveOn.org, a virtual organization, and has been for 20 years. Part of my job will be building partnerships with other virtual groups like Color of Change and re-purposing everyone’s work to address this campaign environment. I would be lying to you if I said it wasn’t a challenge.”

Probably the biggest challenge of the 2020 campaign will be protecting the vote. Donald Trump has said he will lie, cheat, shut down the post office, and do everything short of change the calendar to stay in office. 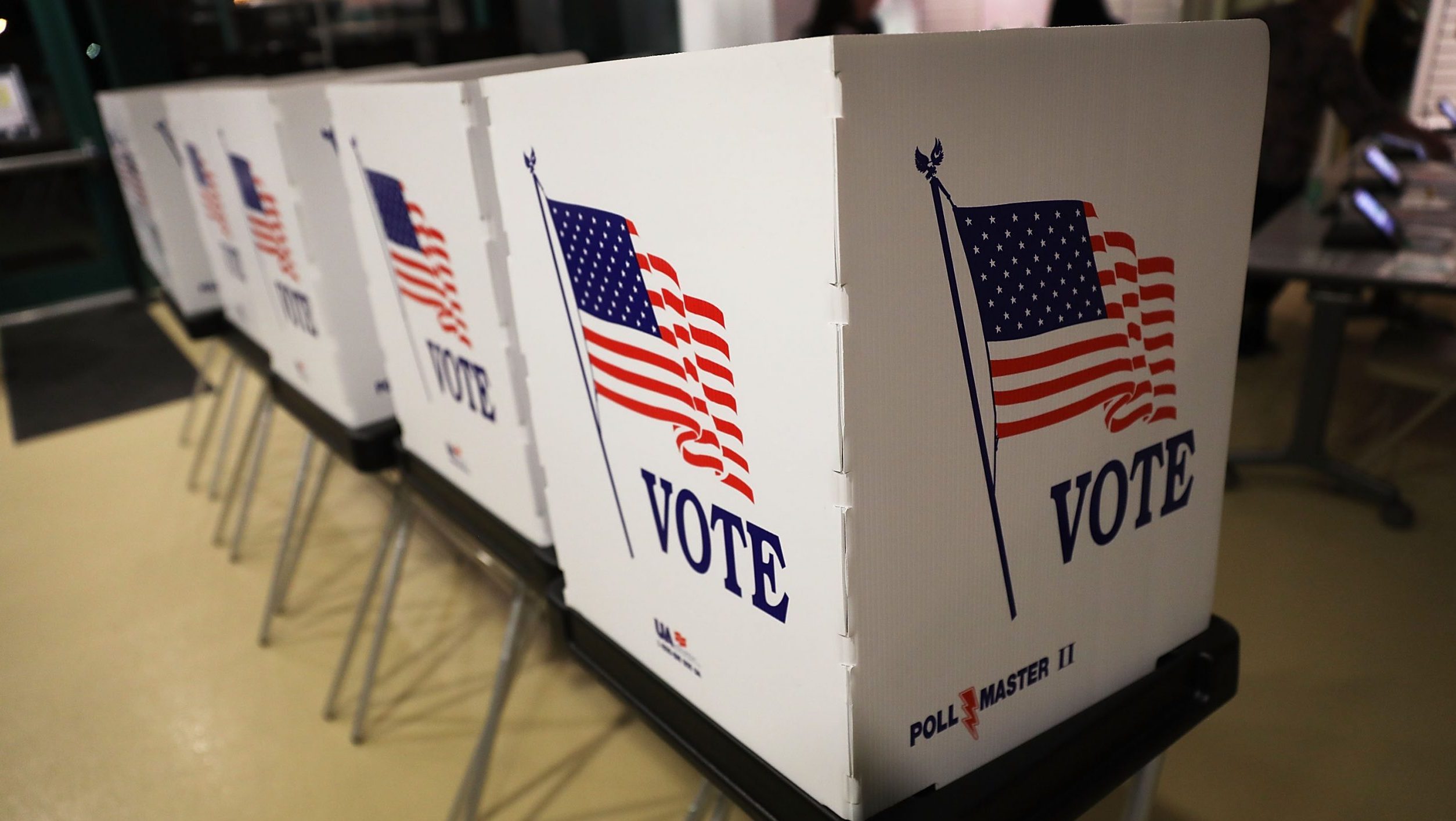 That’s just voter suppression out of the White House, at the state level in Georgia, Brian Kemp, who’s leadership is so questionable the entire governor’s mansion is surrounded by air quotes, and has just canceled a supreme court election. In Wisconsin, the Supreme Court just gave out the blue print to scuttle mail-in ballots.

Karine joins the Biden campaign at a point when voter protection is no longer just focused on Southern states but across the nation. What’s the Biden plan and how will she play a role in that?

“Every campaign has armies of lawyers. You have a whole entire program, voter suppression legal issues anything that happens and a lot are doing it pro-bono. To be helpful to voters,” Jean-Pierre says.

She notes that the Biden campaign is also not in the business of re-inventing the wheel, which is a good sign for a national campaign. Instead of trying to create voter protection plans out of thin air when that very air is filled with COVID, Team Biden is working with organizations like Fair Fight, and local state voter protection groups who know what’s happening on the ground and have the infrastructure to handle unexpected last-minute dirty tricks.

Mind you, these are all strategic questions, and there will be teams of people throughout the Biden campaign, and the unified DNC to address them. The significance of someone like Karine Jean-Pierre being a senior advisor is to have a Black woman in the room, on the campaign and at the table when major decisions will be made. Where advocacy comes in the form of a head nod or a certain look or speaking up when no one else wants to say anything.

Jean-Pierre will also be in the room when Biden is deciding on which woman to pick as his vice-presidential candidate. Asking who she would prefer is a trap question that no good advisor would say out loud in advance, but there is another way of getting at the same question.

“So let’s say you’re in the room with Joe Biden and the VP selection committee. And they’re down to two candidates, Senator Amy Klobuchar and Senator Elizabeth Warren. As a Black woman, who knows what’s at stake this election and who knows what constituencies need to turn out. What do you say to Biden?” 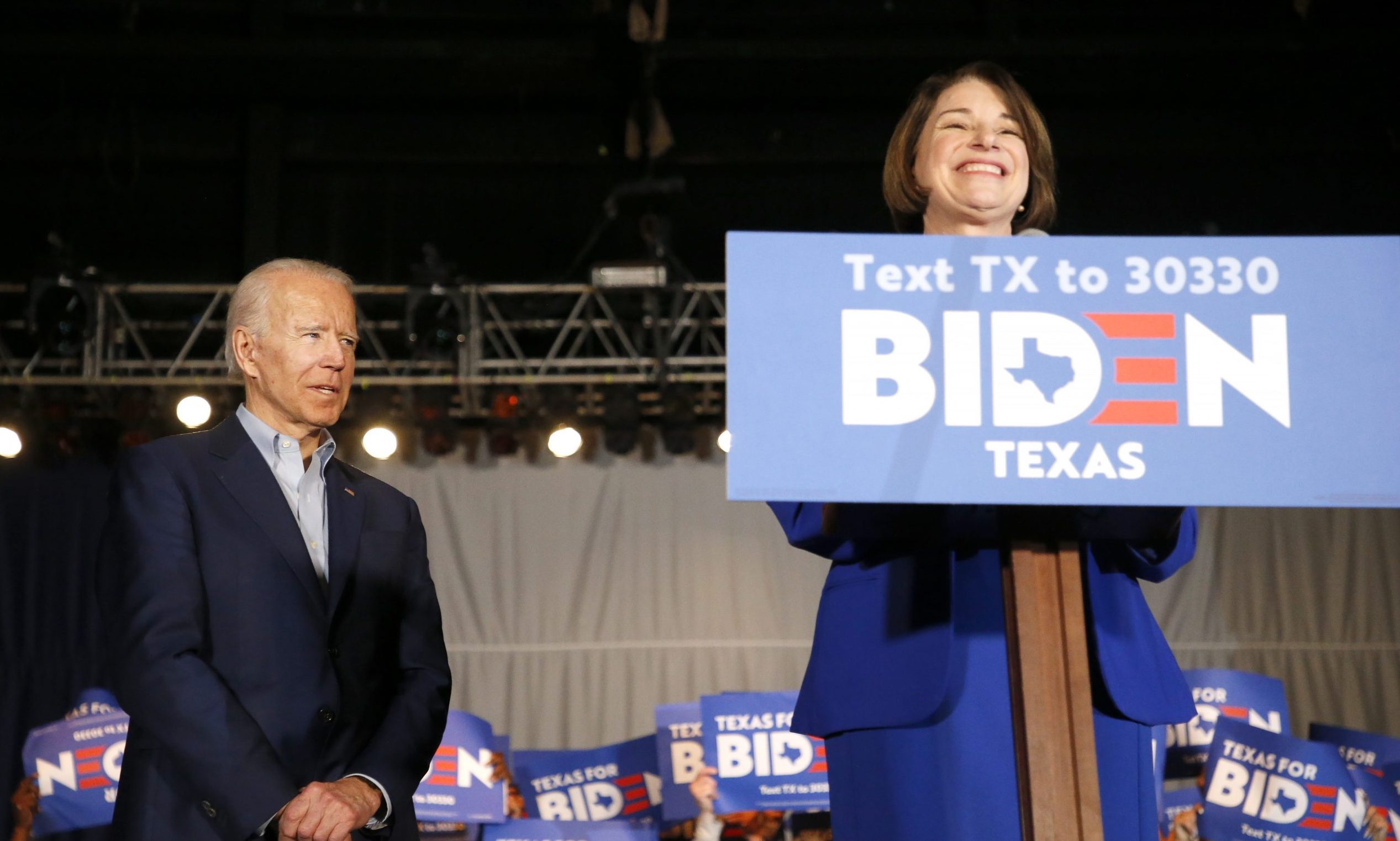 The implication is clear, and Jean-Pierre knows it because she’s got her ears attuned to many of the same political places that I do. Black voters, activists and influencers across the spectrum have made it clear, publicly and privately, that if Joe Biden doesn’t select a Black woman as his running mate, there will be hell to pay at the ballot box this fall.

Yet if faced with that very real possibility as one of the Black voices in the room, what would she say?

There is a pause, as she weighs the significant variables integrated into that question as well as her public responsibilities in the answer. Jean-Pierre points out how significant it is that Joe Biden pledged early on to picking a woman as his VP and has kept to that promise.

Then she goes further.

“I think it’s important to have that representation on the ticket. Who is the best person that’s going to get you to 270? What does that ticket bring you? It’s a ticket that has to give you momentum. Has to give the entire campaign excitement,” she says. 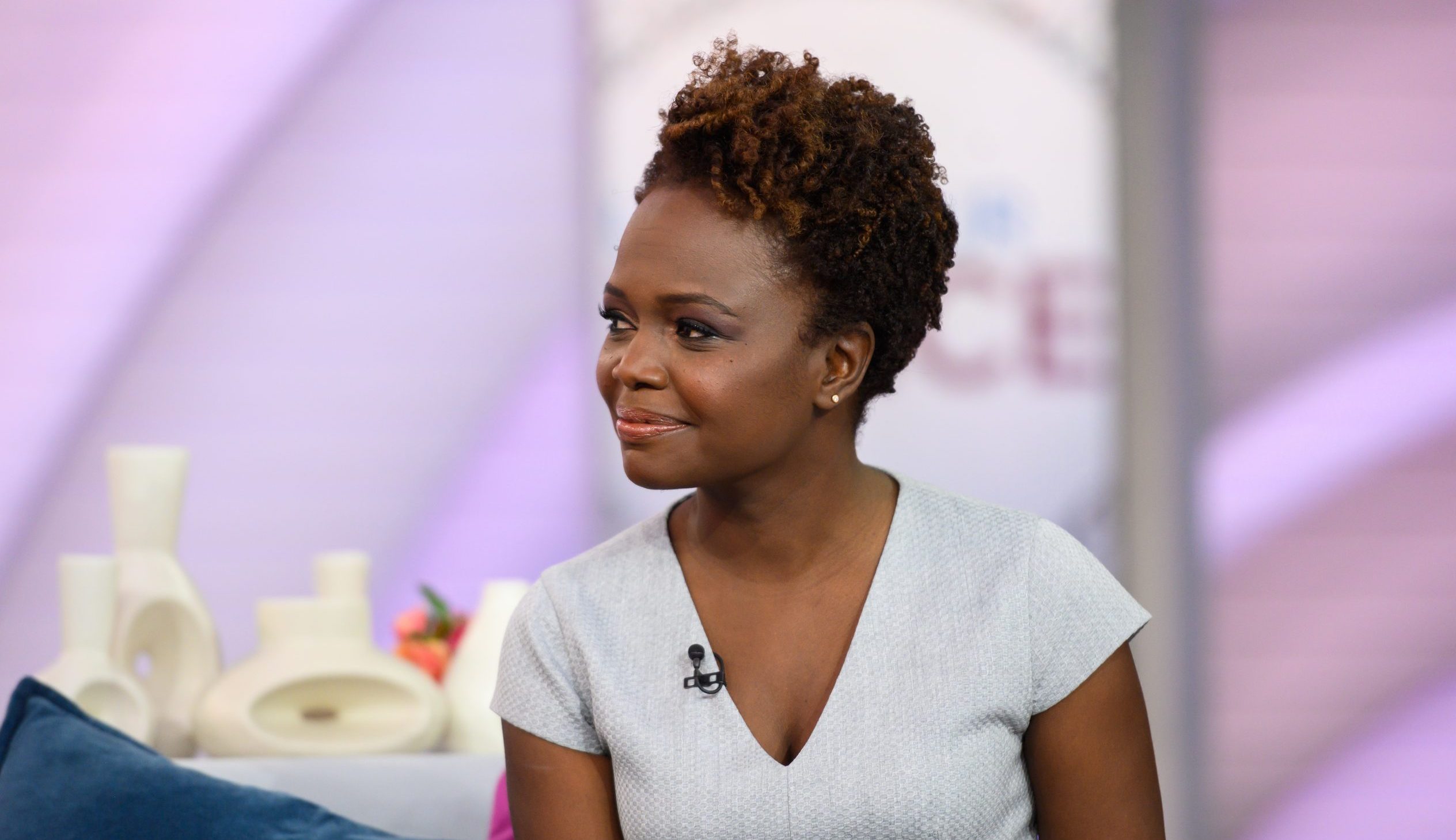 “The pick also has to bring some stability especially in this moment of COVID-19 and that’s incredibly difficult.”

She pauses again knowing from panels at Politicon and long hours of coverage at MSNBC that I won’t be swayed by a pat answer. “Who is the best person on the ticket to get us to a win? Knowing him [Joe Biden] I think he will make the right decision,” she adds. “He will pick the person that makes the most sense for this moment.”

The moment of course is one where Biden’s campaign was saved by Black voters in South Carolina. As we finished our interview I asked Karine if there was anything she wanted the audience to know, something that in the end might give people concerned about the future a little hope, the kind of hope she brings to the Biden campaign.

“Here’s a thing I do have to say – our base is united more than its ever been. This primary was over about 2 months ago. Black voters, just to be more specific, clearly and loudly wanted Joe Biden and that’s what we saw,” she says.

“We do have an advantage in this election that we haven’t seen in over a decade. We can secure that and build on that we’re in a good place. Bring in talented people that can help us really figure that out.”

Hopefully with Karine Jean-Pierre in the room, the building process will have a fantastic architect.