The white man, covered from head to toe, is suspected to be an agent provocateur 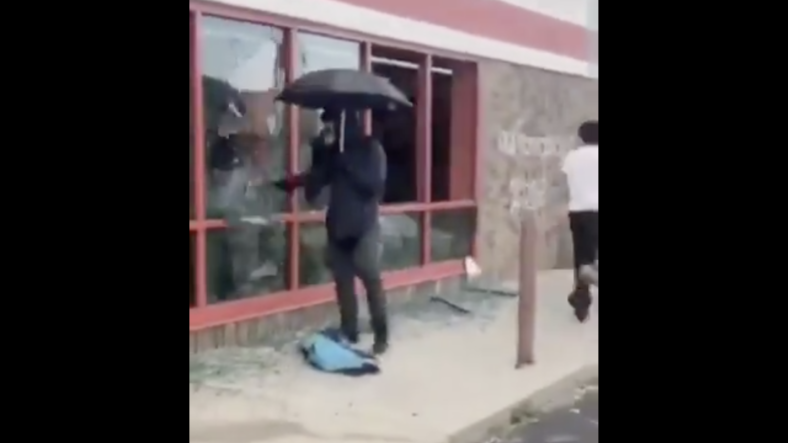 Who is the man in the mask?

Social media is abuzz as people try to identify a white man, dressed in what appears to be tactical gear and a gas mask and carrying an umbrella, seemingly to conceal his identity, breaking windows at a Minneapolis AutoZone. The store was later vandalized and burned, along with a Wendy’s restaurant and an under-construction affordable housing complex.

The video of the man, who is white, being questioned by protesters who chase him away has been shared thousands of times on social media platforms. At one point, he seems to lunge at the woman who is filming him.

His unusual behavior has prompted people to suggest that he was a police officer or an agent provocateur trying to rile up protests and fuel a riot in the midst of protests for the undue death of a Black man, George Floyd, while being arrested this past Memorial Day.

Video shows a suspicious white man breaking windows at the Minneapolis Auto Zone and then walking away from the scene. This looks like an effort to instigate trouble in order to blame the protesters for the consequences.

Many are contemplating if the man is a St. Paul, Minnesota police officer. The St. Paul Police Department has disputed that idea.

“We are aware of the social media post that erroneously identifies one of our officers as the person caught on video breaking windows in Minneapolis. We’ve seen it. We’ve looked into it. And it’s false,” they said in a statement, Bring Me the News reports.

“So we also want to be perfectly clear about this: The person in the video is not our officer. We don’t know who that person is, but we hope he’s identified and held accountable for his actions.”

The statement continues: “Our officer? He’s been working hard, keeping people and property safe, and protecting the right to peacefully assemble. It’s sad that people would post and share this untrue information, adding more confusion to an already painful time in our community.”

convince me this guy that started shit at autozone windows is not a COP pic.twitter.com/zmirgedQkD

An agent provocateur is a person who commits or who acts to entice another person to commit an illegal or rash act or falsely implicate them in partaking in an illegal act, so as to ruin the reputation or entice legal action against the target or a group they belong to. An agent provocateur may be a member of a law enforcement agency, acting out of their own sense of duty or under orders, or another entity.

They are inclined to target a particular group, such as a peaceful protest or demonstration, a union, a political party or a company.

Historically, the United States has used agent provocateurs to disrupt labor protests and other political movements.