City Council Vice President, Andrea Jenkins, equates race with any other virus or disease that has ravished the nation 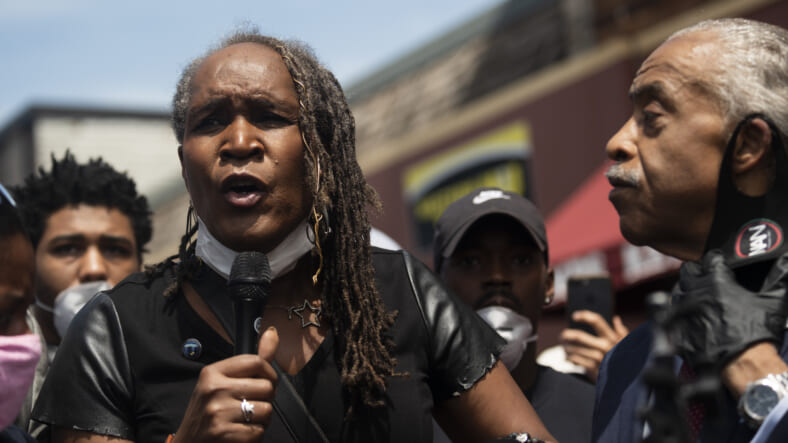 Minneapolis City Council Vice President Andrea Jenkins speaks to a group gathered outside the Cup Foods, where George Floyd was killed in police custody, on May 28, 2020 in Minneapolis, Minnesota. (Photo by Stephen Maturen/Getty Images)

“We feel as if there was a knee on all of our collective necks,” Minneapolis City Council Vice President Andrea Jenkins said on Thursday night.

The politician made this statement as she urged her colleagues to consider racism and bigotry as a public health and wellness concern.

Jenkins spoke at a press conference following Mayor Jacob Frey. The objective of this public assembly was to have city leaders call for “peace and calm” in the streets of Minneapolis in the wake of protests against the police killing of George Floyd.

Ultimately she asked for her colleagues, the city’s mayor, and “anyone else who is concerned about the state of affairs within our community to declare a state of emergency declaring racism a public health issue.”

“Until we name this virus, this disease that has infected America for the past 400 years, we will never, ever resolve this issue,” Jenkins said.

She pushed back against those who might believe that she is race-baiting for calling out racism.

“If you don’t call cancer what it is, you can never cure that disease. And so in an effort to try and cure this disease, I am stating exactly what everyone else has witnessed, and that is racism.”

“I want to remind all of the people that are in the streets protesting, you have every absolute right to be angry, to be upset, to be mad, to express your anger,” she said speaking directly to her constituents.

“However, you have no right to perpetrate violence and harm on the very communities that you say that you are standing up for. We need peace and calm in our streets, and I am begging you for that calm.”