The NBA champion wants to see justice for his friend as well as other victims of police brutality. 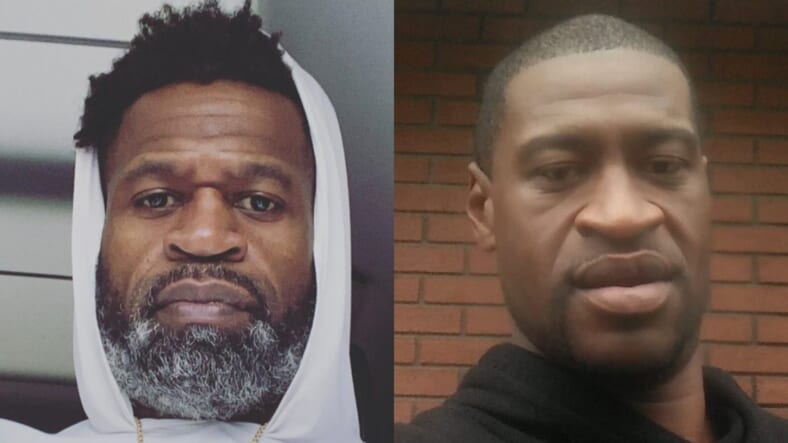 NBA champion Stephen Jackson has shared his anguish about the death of George Floyd, a hometown friend he called his “twin,” and understandably so as the two look so much alike.

After sharing his grief on his Instagram account, Jackson vowed to travel to Minneapolis, Minnesota where Floyd, 46, was killed during an arrest for allegedly passing a counterfeit $20 bill.

All four officers were fired, and Derek Chauvin, the officer seen on a disturbing and now-viral video was arrested today and charged with murder and manslaughter.

#ivehadenough En Route Let’s see what they talking bout Twin. Mourn u till I join u. Love to all who have love for all ✊?✊?✊?✊?✊?✊

In Minneapolis, as protests continued, Jackson spoke to reporters. Video was captured by The Athletic writer who covers the  Minnesota Timberwolves,  Jon Krawczynski.

Jackson talked about his friend making mistakes in the past, but making efforts to move in the right direction. He acknowledged that despite his success he too had made mistakes.

Then Jackson shared why he was moved to travel to Minneapolis in the wake of his death.

Stephen Jackson with just about the most powerful words I’ve ever heard pic.twitter.com/7guc6O4T6W

“I’m here because they are not going to demand the character of George Floyd, my twin,” Jackson, 42, a native of Port Arthur, Texas said. “A lot of times when police do things they know that’s wrong, the first thing they try to do is cover it up and bring up your background to make it seem like the bullshit that they did was worth it.

When was murder ever worth it? Never. But if it’s a Black man it’s approved. You can’t tell me, when that man had his knee on my brother’s neck, taking his life away with his hand in his pocket that that smirk on his face didn’t say I’m protected.”

Jackson also spoke to Craig Melvin of NBC’s Today Show. He told Melvin that they were introduced by mutual friends and that the two became friends due to their uncanny resemblance.

“Being a professional athlete, so many people abuse your friendship and your kindness. He was one of the guys that genuinely supported me. He didn’t call unless he really needed it,” Jackson said. “You don’t have many people who genuinely support you without motives and Floyd was that guy.”

Minnesota im here because my brother was murdered. My twin. No justice No peace. Love to all who have love for all ✊?✊?✊?✊?✊?✊

Jackson says he hasn’t been the same since his friend’s death and became visibility emotional when he talked about hearing Floyd cry out for help from his mother, who passed two years ago.

“It hurt man, it hurt, because I knew that was a cry for help,” Jackson said. “I’m a strong Black man and I know Floyd. We don’t scream our mother’s name like that unless we know our life is in jeopardy. We can’t control it. He even cried out for his kids. It’ just tough to see. His kids had to see that.”

“He would be happy that people were fighting for him but that’s not the way he wanted to do it. He would want the people responsible for his death penalized. He wasn’t the type of people to hurt innocent people. We weren’t that type of people. We ride and see a homeless person and if we can’t do nothing for them, we’ll get emotional. So this is not what Floyd would want.”

The NBA has provided its support with Minnesota Timberwolves player Karl-Anthony Towns, who lost his mother to COVID-19 in attendance at the rally, along with his teammate Josh Okogie. LeBron James, Steph Curry, and NFL players including Eagles quarterback Carson Wentz and Tampa Bay Buccaneers quarterback Tom Brady have tweeted in support of Jackson and Floyd and his family.

“We are not afraid to stand. We are not afraid of the moment,” Jamie Foxx said at a news conference in Minneapolis with Stephen Jackson and other activists https://t.co/zzGloVSyzC pic.twitter.com/gSrMPeWqYV