Philando Castile’s mother speaks out on George Floyd: ‘Why no one is being held accountable?’

The tragic death of George Floyd at the hands of Minneapolis police has triggered bad memories for a Minnesota mother whose son was shot and killed by police in a nearby city years ago.

Valerie Castile, the mother of Philando Castile, told The Marshall Project that she is sickened by the latest events in Minneapolis.

“I’m sick over it and literally heartbroken,” Castile said of Floyd’s death. “We still have that big question: Why? Why does this keep happening and why no one is being held accountable?”

Philando Castile is another Minnesota man who lost his life to police violence. He was killed without reason by a St. Anthony police officer during a traffic stop in 2016, grabbing international headlines and reviving a longstanding discussion about police treatment of Black people.

Protestors carry a banner depicting Philando Castile on June 16, 2017 in St Paul, Minnesota. Protests erupted in Minnesota after Officer Jeronimo Yanez was acquitted on all counts in the shooting death of Philando Castile. (Photo by Stephen Maturen/Getty Images)

The cop was found not guilty of all charges related to the killing. The aftermath of the shooting was shown in a graphic video livestreamed by Philando Castile’s then-girlfriend.

The excessive force that multiple officers used in Floyd’s case, leading to the 46-year-old’s death on Memorial Day, could be the byproduct of years of systematic failings and reform measures neglected by the Minneapolis Police Department, according to the nonprofit outlet that focuses on criminal justice.

“All these reforms really come down to ‘What do you really consider reasonable force?'” Castile asked, speaking of the killing of Floyd. “What was reasonable about how long he held 200 pounds of pressure on that man’s neck?”

A report from The Marshall Project shows that in 2012, the U.S. Justice Department launched a “diagnostic analysis” in an effort to improve the police force’s brutal treatment of Black citizens, who make up about 20% of the city’s population. 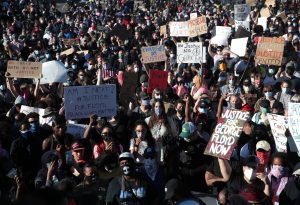 Demonstrators gather to protest the killing of George Floyd on May 30, 2020 in Minneapolis, Minnesota. (Photo by Scott Olson/Getty Images)

By 2015, the justice department had concluded that MPD needed an automated workflow to track complaints of bad behavior by police officers.

Former officer Derek Chauvin, who has been charged with third-degree murder and manslaughter for holding his knee on Floyd’s neck for nearly nine minutes until he died, had 17 complaints on his record. Had a proper system been in place, it could’ve prevented Chauvin from encountering Floyd in the line of duty on that fatal day.

The report also stated that, despite other states abolishing brutal policing tactics such as a chokehold, MPD policy still deems it acceptable, including lethal chokeholds in “legally justified” situations, the report found.

Minneapolis Police Chief Janeé Harteau was a key initiator for the U.S. Justice report and for department reform. She had tried to restrict circumstances in which officers were authorized to kill, as well as altering an intervention system that would cause onsite officers to intervene when a fellow officer used excessive force.

Unfortunately, these policy change attempts have gone unenforced. If so, the fourth officer present during Floyd’s death may have tried to prevent Chauvin and two others from applying excessive force during his arrest.