NYPD car plows into protesters, mayor says they should have ‘gotten out of the way’

NYC mayor Bill De Blasio said 'agitators' escalated the situation and he would not blame the cops. 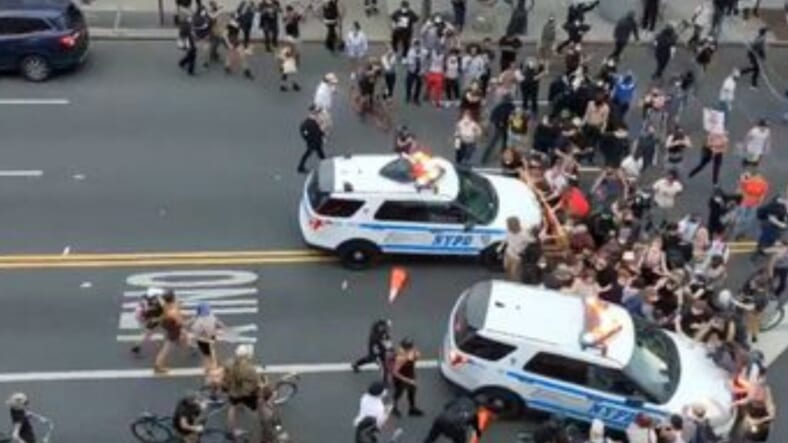 The NYPD is facing intense backlash after video that has since gone viral showing a car plowing into a crowd of people protesting the death of George Floyd. Mayor Bill de Blasio added insult to possible injury by declaring that protestors should’ve “gotten out of the way.”

The incident took place Saturday just after 8 p.m. in the Prospect Heights section of Brooklyn which is three blocks away from the Barclays Center. In videos posted to social media, there is a parked SUV as protesters are gathered on one side of the barricade. Protesters surrounded the car and threw items such as debris and water bottles at the cruiser. Another car soon pulled up and the driver of the first car proceeded to ram the car through the shrieking crowd.

READ MORE: NYPD officer shoves protester, 20, to the ground who then has seizure

Bodies were flown about but there has not yet been any word if there have been any injuries. Condemnation was swift.

NYPD officers just drove an SUV into a crowd of human beings. They could‘ve killed them, &we don’t know how many they injured.

NO ONE gets to slam an SUV through a crowd of human beings.@NYCMayor these officers need to be brought to justice, not dismissed w/“internal reviews.” https://t.co/oIaBShSC1S

AOC further urged that running SUVs into civilians shouldn’t be normalized but de Blasio faulted the protestors about the possible homicide to NY1 when he called in live to the station.

“If those protesters had just gotten out of the way, and not created an attempt to surround that vehicle we would not be talking about this situation,” he said.

He also wanted an end to the protests.

“Anyone who is a peaceful protester, it’s time to go home. The point has been made.”

He also held a news conference Saturday evening around 11 p.m. in which he further blamed some protestors that were “simply out there to cause violence and hatred towards our police officers.”

The mayor said “agitators” escalated the situation. He insisted that the police cars shouldn’t have been surrounded and would not blame the cops for running down citizens expressing their right to protest.

“They didn’t start that situation. It started with people converging on a vehicle and the officers had to get out of that situation. I want to see us get these violent protesters off our streets. Everyday New Yorkers do not do this to police officers,” he said.

“This is not what protests are like in New York City. I am not going to blame officers who were put in an impossible situation. I wish the officers had a different approach, but the protesters did the wrong thing.”

De Blasio did himself no favors if social media were the jury. There were calls for his resignation as he made arresting protestors and not holding the police accountable a priority.

The @NYCMayor’s response tonight was absolutely horrible. The NYPD does not have the permission to run over the people of our city. In tense situations, the solution is not to run over people – the police must try to descalete, which they failed to do so. Bill, this is criminal. https://t.co/XBNS9wmK4O

Protests over Floyd’s Memorial day death at the hands of a Minneapolis officer who placed his knee on his neck has created national, civil unrest. There have been more than 300 arrests since the protests began three days ago. Protestors have been pepper-sprayed and assaulted while police cars have been vandalized and set on fire.