Outcries for justice for Black lives have gone international 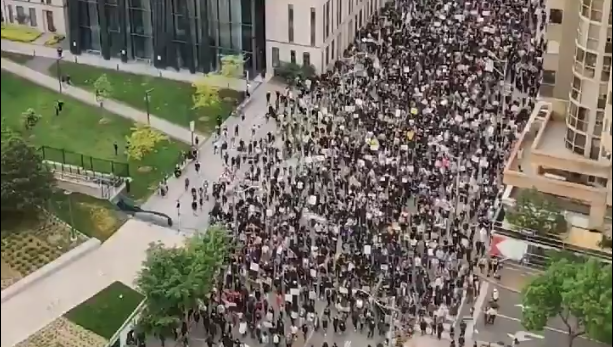 Thousands of marchers showed up to demand just for Regis Korchinski-Paquet, who died after falling off her home balcony during an encounter with local police.

Outcries for justice for Black lives have gone international.

Demonstrations took place in Toronto on Saturday in response to the death of Regis Korchinski-Paquet. The 29-year-old Black woman died on May 26 when she plummeted from her apartment balcony after an encounter with local police.

The protest began at Toronto’s Christie Pits Park, where as many as 4,000 people are believed to have turned out to demand justice. The march proceeded to Toronto Police Headquarters, where it ended peacefully, Global News reports.

The protest, organized by Not Another Black Life, a Toronto group, was publicized on social media with #JusticeForRegis and sought to address matters of anti-Black and anti-Indigenous racism.

Chants of “justice for Regis,” “not another Black life,” “abolish the police” and “no justice, no peace” could be heard during the rally.

Currently: Thousands gather for #JusticeforRegis (the #Toronto woman who died after falling from a balcony earlier this week during an interaction with police) chanting #BlackLivesMatter
Yes, they do. pic.twitter.com/uUu6a74S8f

“The violence we are experiencing globally is not OK and will never be OK,” a protester told the Canadian news outlet. “If you are tired of reading all these posts and the news surrounding anti-Black racism, guess what, we are tired too — tired of being a walking target and dying every single day.”

Toronto police came across Korchinski-Paquet while responding to a “domestic matter” at the woman’s family apartment on Tuesday. According to family lawyer, Knia Singh, police arrived after Korchinski-Paquet’s mother called 911 out of “safety” and “concern” following a family conflict in the apartment.

Sights and sounds from the #JusticeForRegis solidarity rally and march held in Halifax. The family of 29-year-old Regis Korchinski-Paquet has roots in Nova Scotia. The rally was organized by the Justice for Regis Nova Scotia Coalition. pic.twitter.com/hMBnj7cPxH

Protests were organized by the Not Another Black Life group and no violence ocurred during the rally.

“If you are tired of reading all these posts and the news surrounding anti-Black racism, guess what, we are tired too,” one protester said. “Tired of being a walking target and dying every single day.”