President Trump has called for a more ‘dominate’ response as some of the protests have turned violent. 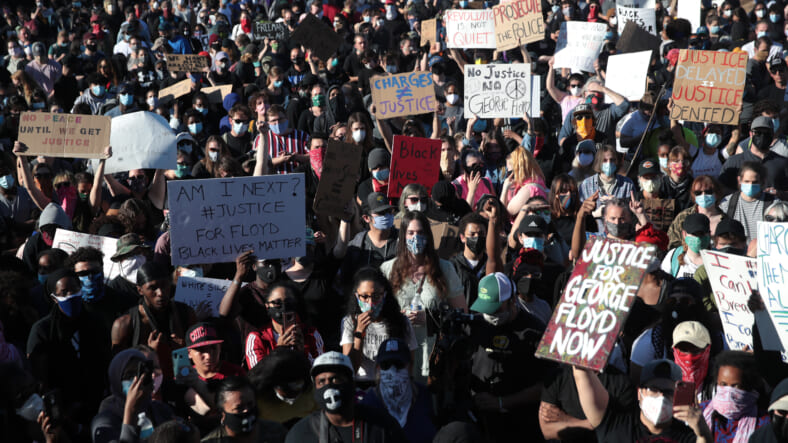 Demonstrators gather to protest the killing of George Floyd on May 30, 2020 in Minneapolis, Minnesota. (Photo by Scott Olson/Getty Images)

Black Lives Matter protestors have in large part been protesting peacefully across the United States in the wake of recent cases of police brutality. But now they have proof that the constant presence of violent counter-protesters, aggressive law enforcement, and white antagonists have given their gatherings a reputation for violence that they didn’t instigate.

Following the release of the viral video of George Floyd pleading “I can’t breathe,” as now former Minneapolis Officer Derek Chauvin pinned him down in an illegal hold, activists took to the streets holding up picket signs and screaming out their frustrations on megaphones. 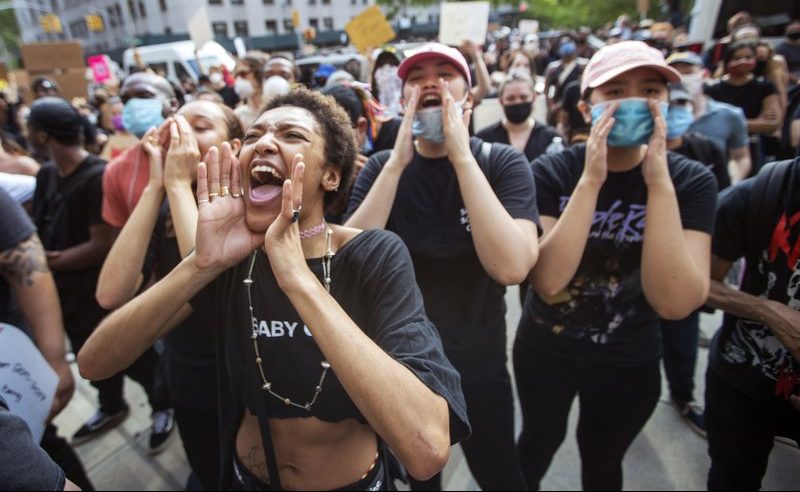 Protesters demonstrate against the the death of George Floyd, a Black man who was in police custody in Minneapolis, Friday, May 29, 2020, in New York. (AP Photo/Mary Altaffer)

But when things began to get violent in a way that far exceeds the norm, several witnesses began posting tweets and videos showing white antagonizers and even some undercover cops seeking to capitalize on the raw emotions of those present.

In one video, a white man is seen busting out the windows of an Autozone while stunned peaceful protestors watch on and one man even confronts him asking him to stop. Soon hundreds of other accounts in cities with large Black populations like Houston, Atlanta, and Detroit popped up showing similar acts by provocateurs.

“Every brick I saw thrown without exception was thrown by white people,” Nancy French tweeted on May 30th from Nashville. “This man was yelling at these white people who’d just put horse excrement on a cop car and broke out their windows.”

Just got back from walking protests in and around downtown Houston.

Biggest observation: Nearly every incident i witnessed, whether tagging buildings, burning an American flag, or cop cars being vandalized, was incited, if not wholly performed, by white people.

The receipts speak for themselves

In Reno, Nevada, a group of white men were caught destroying city hall while both police and actual Black Lives Matter protesters looked on.

the protest in reno was completely peaceful at first, but there was white people who came to just be destructive just because they wanted to not because the cause?‍♀️ https://t.co/UkeXBC9bbA

Yet in stark contrast to what these saboteurs were allowed to do, in places like New York and Los Angeles, officers were repeatedly caught on camera beating and pepper-spraying even the most docile and nonconfrontational Black protestors.

But due to the growing evidence being posted on social media, journalists are finally listening to the protestors who say they are tired of being blamed and talked down to for the actions of interlopers seeking to make them look unhinged.

Andrew Solender who writes for Forbes, actually recorded protesters pleading with an outside group not to destroy a Target in Brooklyn.

“The reason why I held people back from Target was because the individuals who wanted to break and enter were undercover detectives,” said one protester who spoke with Solender. “They wanted it to look like they were with the group, but they were not!”

Trump’s response is what you’d expect

According to the Associated Press, in response to the nationwide protests, President Donald Trump reportedly chastised several governors on Monday– calling them “weak” and then demanded that the mandate tougher crackdowns on burning and stealing among some demonstrations.

Despite the tidal wave of footage showing police and the military using a disproportionate amount of force against those who are protesting within their constitutional rights, the president and Attorney General Bill Barr are seeking an even more “dominate” approach. They want law enforcement to control the streets even more than they already have.

During a video teleconference that also included law enforcement and national security officials, Trump very bluntly told the state leaders they “have to get much tougher.”

Trump’s angry scolding of the nation’s governors came in the wake of heated demonstrations. It resulted in Secret Service rushing him to an underground bunker previously only used during terrorist attacks.

Nashville is being destroyed right now. Every brick I saw thrown without exception was thrown by white people. This man was yelling at these white people who’d just put horse excrement on a cop car and broke out their windows. He said, ‘they’ll blame us!’ #NashvilleProtest pic.twitter.com/TWL5VFeWGq

This boy had his hands up when an NYPD ofcr pulled his mask down and pepper sprayed him. ⁦@NYPDShea⁩? Mayor ⁦@BilldeBlasio⁩? pic.twitter.com/YtXDOoVckA

Some protestors in Brooklyn calling to loot the Target, but organizers are rushing in front of the store to stop them, keep things non-violent #nycprotest pic.twitter.com/6x70cpcjep

Who’s the big bad wolf that wants to set up our black youth protesting the tragic death of #georgefloyd Thank you Reuben for validating one of my concerns during this chaotic time. Nothing should deflect from the pain we are seeing by having another black man killed in front of our eyes. What the hell is going on? What is the hidden agenda behind this action? We need eyes behind our head. #teachourchildren #civildisobedience #sticksandstones #leadership #setup Posted @withregram • @reubengotsoul The Dallas protest was a lot of things. But I was very disappointed to see this RANDOM stack of bricks in front of the courthouse. #setup #dobetter