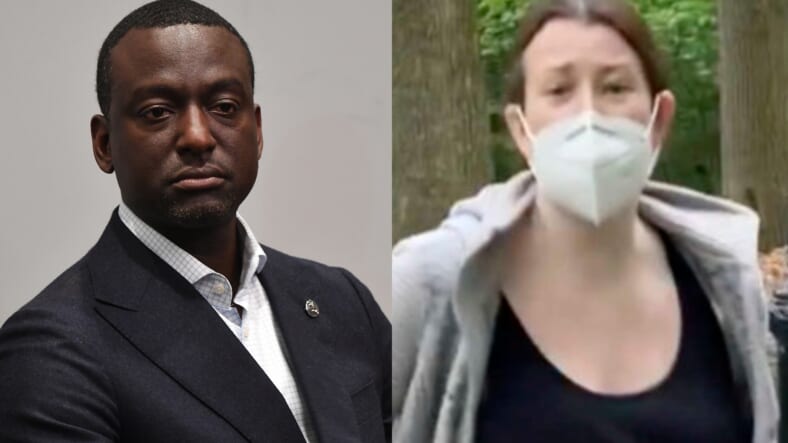 Dr. Yusef Salaam of the Exonerated Five, left, and Amy Cooper, right, who falsely called the police of a Black man. (Photo by Paras Griffin/Getty Images for Netflix | Twitter)

This article will be discussing sensitive topics such as racialized violence and death. Please protect your peace as needed. — Dear Culture Podcast

It’s for sure been a challenging week, month and year for Black people in America. After months of coping with the staggering physical and mental health effects of COVID-19, Black people have had to witness the back-to-back deaths of unarmed Black people.

Those tragedies have now been activated into mass protests throughout the country and around the world.

In a critical time like this, Dear Culture Podcast hosts Natasha S. Alford and Todd Johnson sat down with Dr. Yusef Salaam of the Exonerated 5, who was wrongfully convicted in the 1989 Central Park jogger case, in which a white woman was raped and assaulted.

Given his personal experience with racism in the criminal justice system and the country’s current state of unrest over racial violence, Dear Culture posed the question to. Dr. Salaam, what makes this time different?

“As we’re dying from COVID-19 in a crisis, we and the world are realiz[ing] that the crisis over and above all is that of white supremacy,” Dr. Salaam told theGrio‘s Dear Culture.

In addition to the inherent racism in the public health crisis and in policing, many were also outraged by the racial violence of a white woman, Amy Cooper, calling the NYPD on Black birdwatcher, Christian Cooper (no relation).

Captured on video, Amy Cooper falsely claimed that Christian Cooper threatened her life and promised to emphasize that he was an “African American man” before making the call.

“If police and [white vigilantes] overstep the boundaries of the law, they should be prosecuted to the fullest of extent of the law. And those prosecutions can’t be from people that are from them,” Dr. Salaam says.

For Dr. Salaam, watching the Amy Cooper video at Central Park was triggering and brought back painful memories. It was at that same park in 1989 when then-teenager Salaam would have his life completely upended.

Dr. Salaam says what Amy Cooper did was “illegal” and that she should be “made an example of” because something like this “should never again be allowed.”

To hear Dear Culture’s entire conversation with Dr. Yusef Salaam, listen to the latest episode below.