The holiday, which is becoming mainstream due to Black Lives Matter movement, has been celebrated by the Black community for decades. 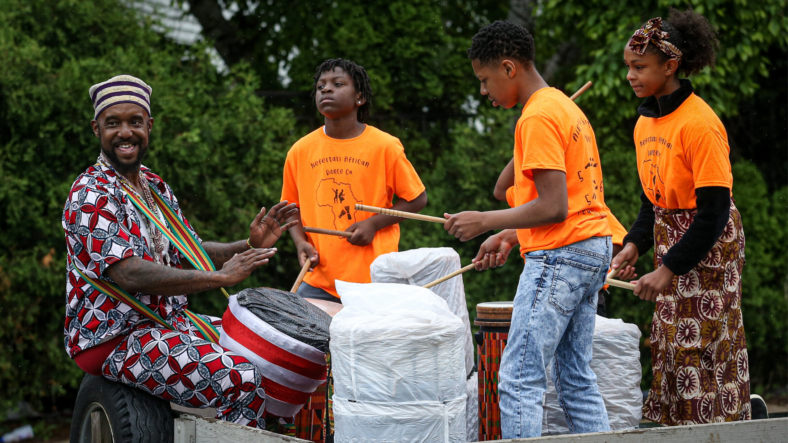 Members of the parade perform during the 48th Annual Juneteenth Day Festival on June 19, 2019 in Milwaukee, Wisconsin. (Photo by Dylan Buell/Getty Images for VIBE)

Acknowledged annually on June 19, the former regional holiday provokes celebration in Black communities nationwide. Juneteenth, a portmanteau of the calendar date, is rooted in Texas and commemorates the ending of slavery. The homegrown holiday’s Southern beginnings have evolved into a day of recognition for freedom and legacy in African American communities.

On June 19, 1865, the enslaved people in Galveston, Texas were informed of the Emancipation Proclamation two-and-a-half years after former President Abraham Lincoln signed the historical act. According to the National Museum Of African American History and Culture, approximately 2,000 troops, lead by General Gordon Grange, arrived in the southern state announcing the freedom of over 250,000 enslaved slaves.

#Onthisday in 1865, enslaved African Americans were notified of their freedom by Union troops in Galveston, TX—two years after the Emancipation Proclamation was issued. Known as #Juneteenth, this day is widely celebrated as the end of chattel slavery in the U.S. Juneteenth marks our country’s second independence day. Though it has long been celebrated among the African American community, it is a history that has been marginalized and still remains largely unknown to the wider public. The legacy of Juneteenth shows the value of deep hope and urgent organizing in uncertain times. This Museum is a community space where that spirit can continue to live on – where histories like this one can surface, and new stories with equal urgency can be told. #APeoplesJourney #ANationsStory ?: Grace Murray Stephenson and family, Juneteenth Emancipation Day Celebration, June 19, 1900, Texas, Courtesy Austin History Center.

The Lone Star State, before being taken over, had become a safe place for citizens who were not willing to give up their human property. Once the decree was known the moment became engraved in society forever. Now feasts, parades, church programs and more erupt every late spring, however, this was not always the case.

Juneteenth.com reports early gatherings for the holiday were not easy as many Black people had yet to become landowners. Festivities were barred from many public spaces. Although Emancipation Park was acquired in 1898 in Houston, celebrations dwindled down in the early 1900s due to cultural and economic reasons.

The Civil Rights Movement of the 1950s and 1960s inspired a resurgence in Juneteenth festivities. In 1980, the state of Texas became the first to recognize Juneteenth as an official holiday.

READ MORE: OP-ED: Priscilla Renea on why celebrating Juneteenth is more important than Fourth of July

In 2020, Juneteenth is recognized by all but three states (Hawaii, North Dakota, South Dakota) as the country is intertwined in another civil rights movement, calling for social justice and the end of police brutality. Many communities hold local celebrations for the commemorated holiday and individual families often plan cookouts and other gatherings empowering their familial bonds.

There are multiple ways to uplift Black liberation and resistance during Juneteenth. Scrolling through social media, several campaigns for the annual recognition of emancipation have been proposed, including flocking to Black-owned businesses, uploading moments of Black beauty and Black joy to social media, and taking a break from the stressful digital streets.

As corporations continue recent abrupt changes in efforts to create equal work environments, Juneteenth has been named an official paid holiday at the offices of Twitter, Nike, the NFL, and The New York Times, among several who made the information public via social media.

The @nytimes is observing Juneteenth as a paid holiday this year. We have much more work to do on racial equity, but I appreciate the gesture from management. Hopefully it’s a sign of more meaningful change to come. pic.twitter.com/3aVVDm2nG4