OPINION: 'For the first time in years, he’s telling our stories again, and that’s worth seeing.'

The two and half years that the Chappelle’s Show ran on Comedy Central was the highlight of Black Gen X comedy (no shade to In Living Color but even they weren’t as quotable as Dave).

Dave’s post-Chappelle’s Show comedy has been a mixed bag, some of it hilarious and groundbreaking, some of it tone-deaf and increasingly detached from the fans that made him famous.

Especially his last Netflix special, Sticks & Stones, most of which came off as a rant against how hard it was to be famous, not exactly the kind of humor that helps the everyday fan forget about their problems for 47 minutes.

I’ll be honest, I thought Dave had lost it. 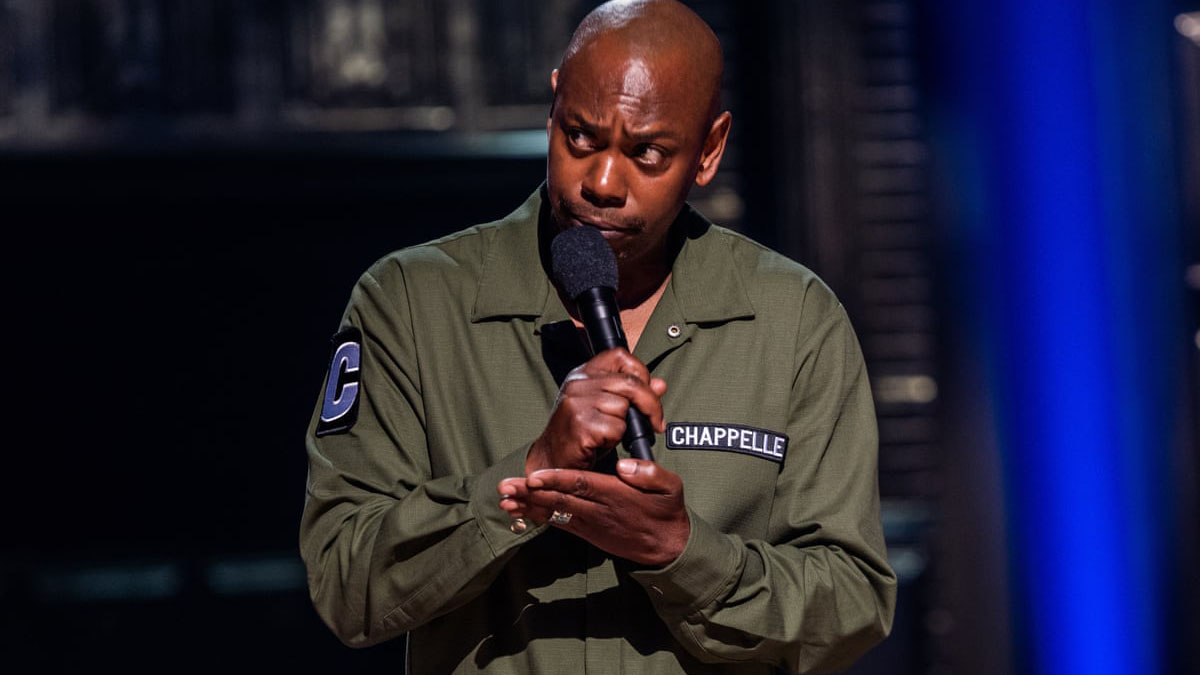 Ironically his latest special, entitled 8:46, which dropped last night on the YouTube channel Netflix Is A Joke, actually brought back the Dave Chappelle that transformed comedy for a generation 15 years ago. It was historic, moving and perfect for our nation’s mood, and to top it off, he wasn’t even funny.

The 8:46 special is named for the amount of time former Minneapolis Police Officer Derek Chauvin kneeled on George Floyd’s neck until he died. Beyond the jarring name, as a production it is an interesting piece of stand-up comedy.

The show opens with an outside set, obviously somewhere near Chappelle’s adopted home of Yellow Springs Ohio. The small crowd is socially distanced, tested for temperature, and wearing masks with the Chappelle logo. While David begins by saying what a strange set up this is, seeing him slouched on a three-legged stool, dressed in all black with a cigarette in his hand is how many of us have become accustomed to seeing him on stage in the last half-decade.

He then begins a searing, 27-minute set, almost a Ted Talk about what is happening in America, and weaves his personal experiences, feelings and recent history into every moment. Chappelle inserts himself into the last 100 years of Black history and African American struggles of police violence, with passion and some resignation. He’s like a tired, and angry Black Forrest Gump, but there is nowhere for Black folks to run to when it comes to America’s police brutality.

The power of 8:46 is Chappelle’s ability to relate to Black America’s current exhaustion as well as our intimate relationship with the state-sponsored violence that has finally captured the sheltered-in-place imagination of white America. While many of us may not have known Breonna Taylor, Ahmaud Arbery or George Floyd personally, most of Black America is only one or two degrees of separation away from police brutality or lethal violence. Most of us don’t know anyone who’s name has become a hashtag, but many of us know someone who does.

I walked the same path as Trayvon Martin from the 7-11 through the back fence to his housing area. I’ve driven by the veranda where Tamir Rice was shot who knows how many times when I lived in Cleveland. I went to UVA where Martese Johnson was beaten by police in 2015 and white nationalists launched a terrorist attack in 2017.

Rev. Clementa Pinckney who along with 8 parishioners was murdered by Dylan Roof was an old friend I’d known for 20 years. Johnathan Ferrell who was murdered by police in 2013 is the cousin of one of my best friends. When Dave Chappelle says that he was pulled over by officer Sean Williams and given a warning, a mere 24 hours before that same officers shot John Crawford in a local Walmart for doing nothing more than having a BB gun in his hands he was no longer the distant celebrity Dave Chappelle doing riffs about cancel culture and the trials of celebrity.

He was once again a Black man in America doing the kind of truth-telling that has made him an icon. When Dave almost wails about realizing that 8 minutes and 46 seconds, the time it took Derek Chauvin to kill George Floyd, is also the exact time that he was born, 8:46 a.m. He’s putting Black pain through a megaphone that 24-hour cable networks continue to ignore or silence. 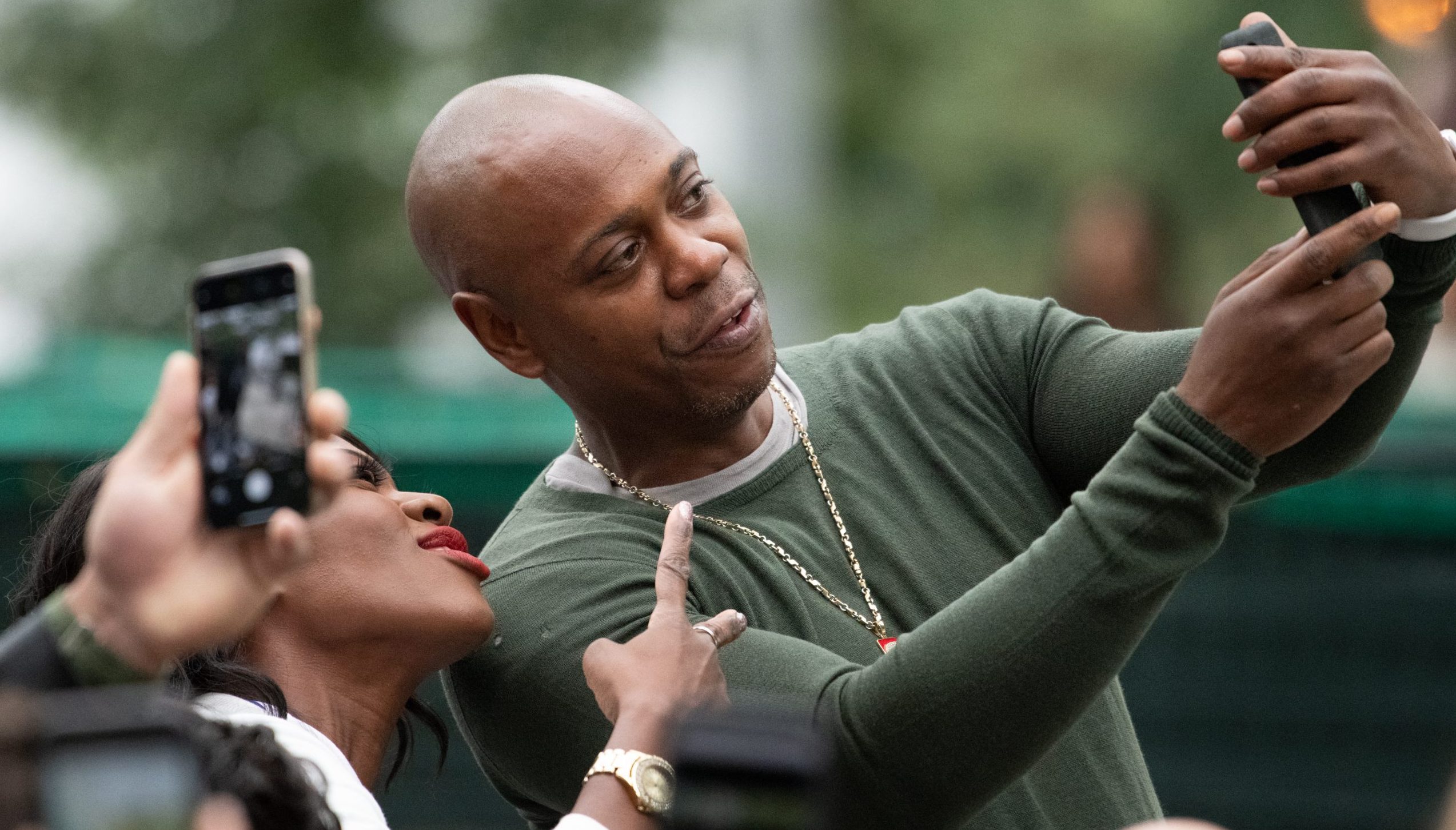 Dave Chappelle takes a selfie with the general public gathered outside the security perimeter set at the Roy Thomson Hall during the Toronto International Film Festival. (Photo by Roberto Machado Noa/LightRocket via Getty Images)

When Dave Chappelle talks about his great grandfather, who was born into slavery, AME Pastor William D. Chappelle taking an anti-lynching delegation to Woodrow Wilson’s White House in 1918, he’s reminding America that this history of violence is not ancient history.

When he says that Pastor Chappelle’s wife, his own great grandmother, was the last name his father cried before dying, just like George Floyd called on his mother with his dying breath he’s putting it square in the face of America that Black pain is inter-generational, and not easily wiped out by a few prominent Black faces on TV or in elected office.

Chappelle is a man that Americans trust, and for good reason, so don’t take him to task for playing fast and loose with some chronology and timelines during parts of his show. No, Kobe Bryant did not play his last game on the same day as the Dallas police shootings in 2016, (it was months later) and Fox’s race-baiting host Laura Ingram told LeBron to “Shut up and Dribble” almost two years later.

I’m sure that the far right will jump on these inaccuracies to muddle Chappelle’s message just like reporters trafficked in the lie that Colin Kaepernick was protesting the flag. The thing is, Dave is a comedian, not a history professor, so who cares if he makes mistakes.

If you are a fan of Chappelle the comedian you’ll enjoy the show (a friend of mine who is a huge Dave fan loved the riffs on Candace Owens) if you are a Chappelle fan who’s drifted away in recent years like me, it’s a reminder to come back around and give him a listen again.

If you’re interested in just hearing a tight 27 minutes about where this country is and how we all feel, to feel catharsis without the added burden of police videos, disingenuous cable anchors and bad faith pundits it’s time well spent.

For the first time in years, he’s telling our stories again, and that’s worth seeing.