In an internal memo, the league said offices will be closed to honor the day

The NFL is making vast strides to embrace its African-American staff, players, and supporters. This year, they’ve announced that they will celebrate Juneteenth as an official league holiday.

League commissioner Roger Goodell, who earlier this month announced his support for the league’s 75% of African-American players in a video proclaiming that Black Lives Matter, announced the move today in an internal memo, reports Forbes.

NFL will recognize Juneteenth as a holiday this year, Roger Goodell told the league in this email this morning: pic.twitter.com/sS0DYYk46c

This comes after the NFL committed $25M a year over the next ten years to advance social justice. They made that announcement yesterday.

“This year, as we work together as a family and in our communities to combat the racial injustices that remain deeply rooted into the fabric of our society, the NFL will observe Juneteenth on Friday, June 19th as a recognized holiday and our league offices will be closed,” Goodell said in the memo. “It is a day to reflect on our past, but more importantly, consider how each one of us can continue to show up and band together to work toward a better future.” 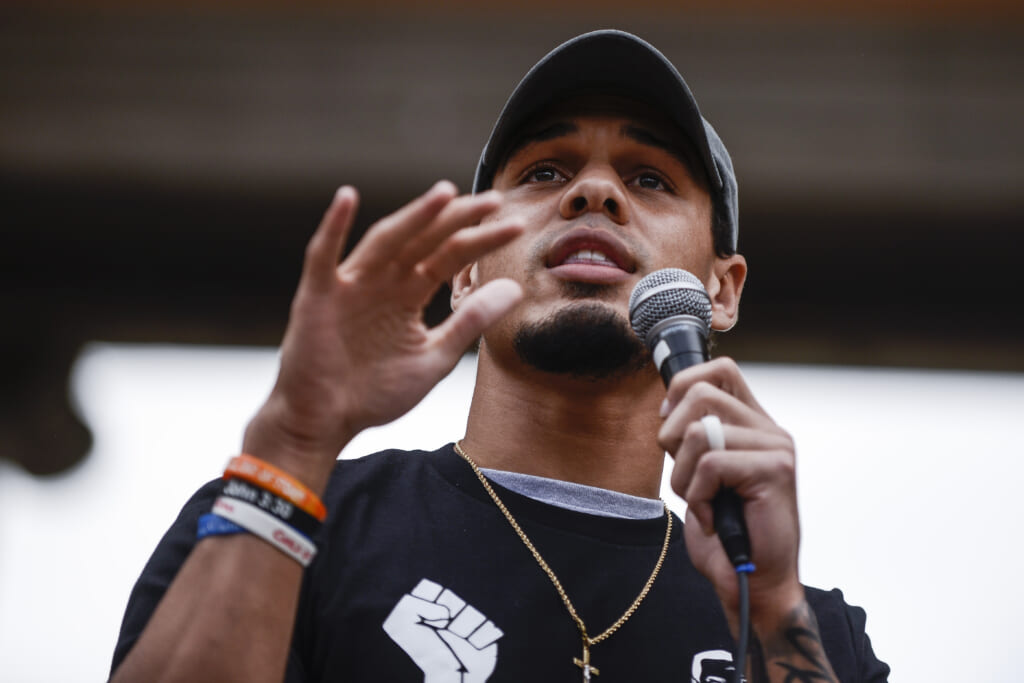 Denver Broncos safety Justin Simmons speaks at a protest for the death of George Floyd on June 6, 2020 in Denver, Colorado. (Photo by Michael Ciaglo/Getty Images)

Twitter, Square, and Nike are among the companies that have shared their plans to celebrate Juneteenth which is the day that Texas celebrated as an official end of slavery. The holiday is not a national holiday but has become more widely celebrated in recent years.

The Super Bowl MVP speaks out. (via @PatrickMahomes) pic.twitter.com/iQuNglWGtA

In the wake of George Floyd‘s death in Minneapolis along with the deaths of Breonna Taylor in Louisville, Kentucky and Ahmaud Arbery in Georgia players asked Goodell to declare that ‘Black Lives Matter’ and that he was in support of the league and its African-American players, who make up 75% of the league.

Earlier this year, the league also made attempts to strengthen the Rooney Rule which was created to generate the hiring of more Black head coaches. That rule, especially as no Black head coaches were hired in an off-season of multiple vacancies has proven to be more ceremonial than impactful.

The only thing the league hasn’t done, despite two weeks of protest on police brutality is to offer an olive branch of any kind to Colin Kaepernick who settled a collusion case with the NFL after his anthem protests lead to his virtual banishment from the sport.