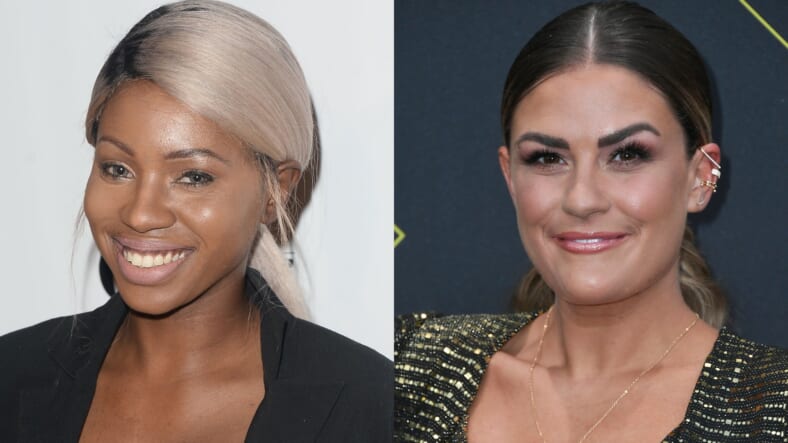 Earlier this month Stassi Schroeder and Kristen Doute were fired from Bravo’s reality show hit Vanderpump Rules over racist incidents involving a Black castmate. Now that same former costar whose accusations got them fired has revealed that another member of the show called her a “nappy-headed ho.”

Last week, former Pump Rules star Faith Stowers revealed that Schroeder and Doute falsely called the police on her for fun, potentially pulling her life in danger. Now Stowers is calling out other stars of the show costars for creating a hostile work environment for her as the only Black cast member during her time on the series.

Perhaps the most inflammatory of her allegations are against Brittany Cartwright who she claims called her a “nappy-headed ho” during a heated phone conversation.

At the time, Cartwright’s then-fiance had cheated on her with Stowers which is what reportedly motivated several women on the show to lash out at her. While Stowers admitted to sleeping with Taylor while he was dating Brittany, the infamous playboy denied their affair repeatedly before later coming clean about his infidelity.

Rather than be upset at her partner, Cartwright took her anger out on Stowers and that’s when the racial slur allegedly occurred.

Thursday, while appearing on AfterBuzz TV, Stowers recalled, “I’m like ‘Brittany, hey girl! I’m trying to apologize to you. Can we please talk?’ But she was still in like a bad space, so she’s like cussing and yelling and calling me names and stuff.”

“So I’m still trying to remain calm and communicate with her because it’s very important for me to hear what she has to say,” she continued. “So I’m trying to talk to her and I can still see that she’s upset. So as she’s yelling, that’s when I heard her say, ‘You a nappy-headed ho.'”
“She used that as an insult, which I just didn’t understand why she used that as an insult to me. You can call me a ho, but don’t call me a nappy-headed ho,” Stowers opined, adding that the whole interaction took place on speakerphone and that her family was “insulted” when they heard the slur.

“I had NOTHING to do with that. She knows I don’t have a racist bone in my body. She hurt me really bad and never once apologized,” Cartwright replied in the since-deleted comment captured and shared on Reddit.

“I haven’t spoken to her since the night I found out and I did not say anything about nappy hair. I yelled at her and I did that rightfully so like any other human being would do if they had just found out what I did,” she continued. “If she ever even tried one time to apologize to me I could have forgiven her like I did Jax but she never ever did or even showed remorse for how bad she hurt me.”