Terry Spencer, Associated Press   |
In this Nov. 3, 2019, file photo, New England Patriots owner Robert Kraft waves to fans as he walks on the field prior to the team’s NFL football game against the Baltimore Ravens in Baltimore. (AP Photo/Julio Cortez, File)

FORT LAUDERDALE, Fla. (AP) — Prosecutors charging New England Patriots owner Robert Kraft with twice buying sex from massage parlor prostitutes will attempt to save their case this week by arguing to an appeals court that his rights weren’t violated when police secretly video-recorded him in the act.

Prosecutors will tell the Florida Fourth District Court of Appeal during an online hearing Tuesday that a county judge erred when he invalidated the January 2019 search warrant allowing police to install secret cameras at Orchids of Asia spa as part of an alleged sex trafficking investigation.

The judge said the warrant didn’t sufficiently protect the privacy of innocent customers who received legal massages, and he barred the videos’ use at trial as well as testimony about what they showed. If the ruling stands, it will deal a fatal blow to the prosecution’s case.

“Mr. Kraft’s guilt is a virtual certainty” and he has no right to benefit from any possible mistakes police made involving innocent customers, Deputy Solicitor General Jeffrey DeSousa wrote in court documents.

Kraft’s attorneys vehemently disagreed, arguing that if the three-justice panel allows the videos’ use, “civil liberties cherished in Florida and beyond” will be endangered.

“If the state wins this appeal, then everyone loses, not just the accused,” attorney Frank Shepherd wrote. “Government could run roughshod over privacy and constitutional rights while evading scrutiny.” 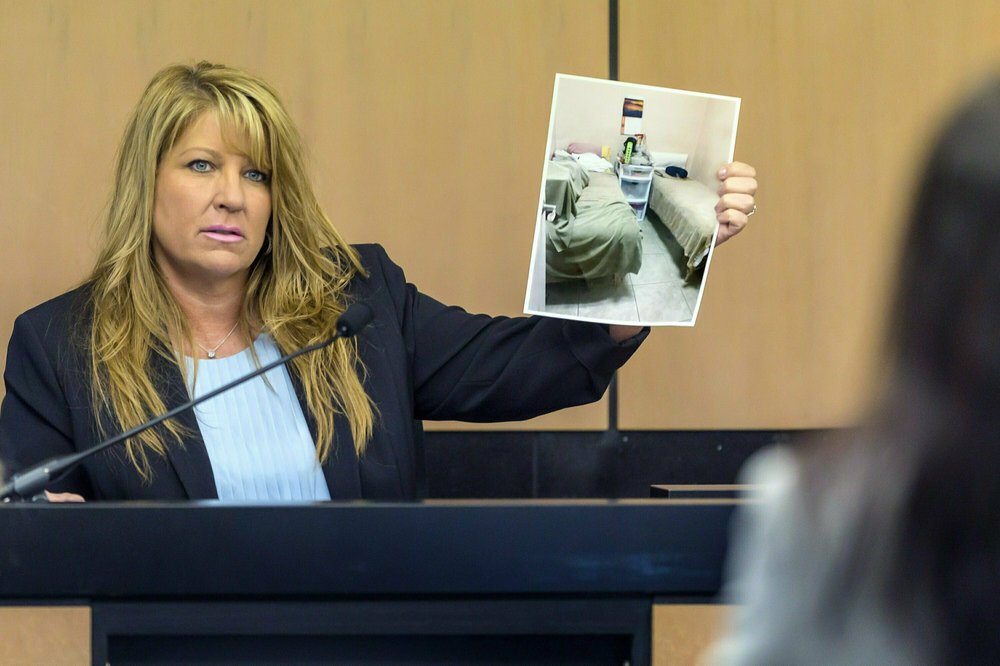 In this April 30, 2019, file pool photo, Karen Herzog, a Florida Department of Health inspector, shows a photo she took of beds in a room during her inspection of Orchids of Asia Day Spa, during a motion hearing in the Robert Kraft prostitution solicitation case in West Palm Beach, Fla. (Lannis Waters/The Palm Beach Post via AP, Pool, File)

The Jupiter police recordings led to misdemeanor charges against Kraft and two dozen other alleged Orchids of Asia customers. The spa owners and some employees are charged with prostitution-related felonies.

Most cases are in limbo while the appeals are heard. If prosecutors can’t use the videos, they would almost certainly dismiss any misdemeanor charges awaiting trial. Some defendants took plea deals but Kraft refused. The felony cases could proceed, as those have other evidence besides the videos.

Kraft, a 79-year-old widower and part-time Palm Beach resident, has pleaded not guilty but issued a public apology. He faces a possible one-year jail sentence if convicted, but would likely receive a fine, community service and other sanctions. Kraft, whom Forbes Magazine ranks as the 82nd richest American with a worth of almost $7 billion, is employing several high-priced attorneys to fight the charges.

— The warrant is valid because police minimized any privacy invasion by having only three detectives monitor video. Any further minimization, such as recording only snippets of each massage, would have made the investigation impossible.

— Kraft illegally paid for sex and is lawfully covered by the warrant, even if the justices determine police violated innocent customers’ privacy rights.

— If the warrant is invalid, the detectives relied on it “in good faith” and a sanction banning the video is too extreme.

Shepherd submitted several counterarguments for Kraft. They include:

— Police had enough evidence to charge the spa owners with felonies without recording, making the cameras “wholly gratuitous.”

— The evidence detectives presented to obtain the magistrate’s warrant approval was “deliberately misleading,” negating any argument they acted in good faith. 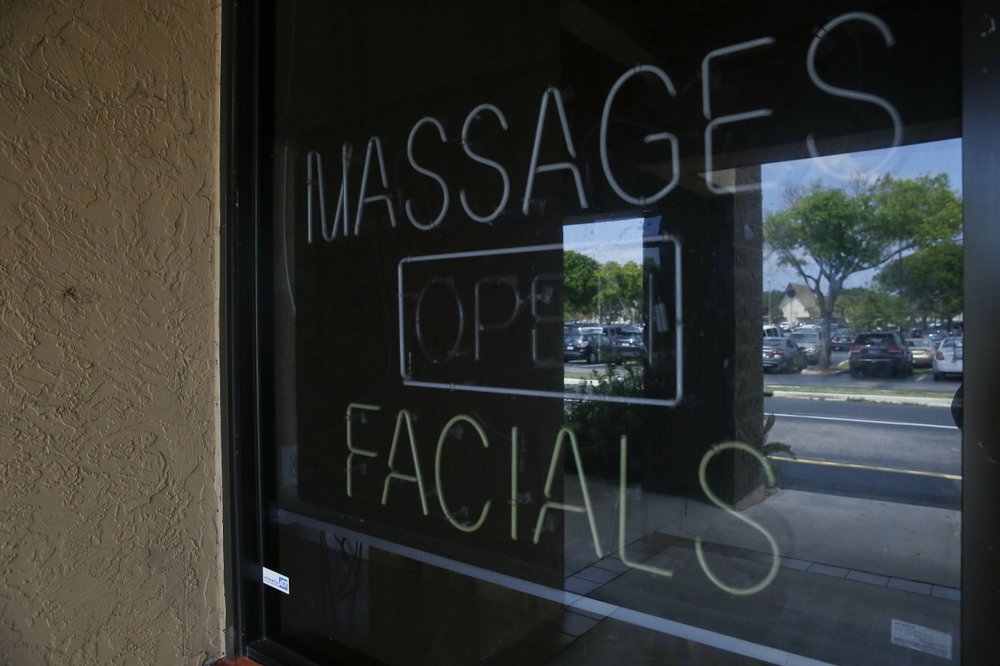 This March 26, 2019 file photo, shows a sign in the window of the front entrance of the Orchids of Asia Day Spa in Jupiter, Fla. (AP Photo/Brynn Anderson, File)

The justices won’t immediately rule after the hearing; decisions usually takes weeks. The losing side will likely appeal to the Florida Supreme Court, which could accept the case or let the justices’ ruling stand.

Authorities say the Orchids of Asia investigation was part of a multicounty probe into possible sex trafficking by spa owners who they believe brought women from China and elsewhere to work as prostitutes. About 300 people were charged with various felonies and misdemeanors, but no trafficking charges were pursued — prosecutors say they received no cooperation from masseuses whom they suspect were trafficked.

According to police, Kraft’s chauffeur drove him to Orchids of Asia on the evening of Jan. 19, 2019, where detectives recorded him engaging in a sex act with two women and then paying an undetermined amount in cash.

Investigators said Kraft returned the next morning and engaged in recorded sex acts with a woman before paying with a $100 bill and another bill.

Hours later, Kraft was in Kansas City for the AFC Championship game, where his Patriots defeated the Chiefs. His team then won the 2019 Super Bowl in Atlanta, the Patriots’ sixth NFL championship under his ownership.

Prosecutors offered to drop the charges if Kraft entered a diversion program for first-time offenders. That would include an admission he would be found guilty if the case went to trial, a $5,000 fine, 100 hours of community service and attending a class on the dangers of prostitution and its connection to human trafficking.

The hearing is scheduled to begin at 10 a.m. EDT Tuesday on the court’s YouTube channel.