Black women need to be free

OPINION: We must work to re-build the system in order to amplify Black women’s voices and prioritize our freedom 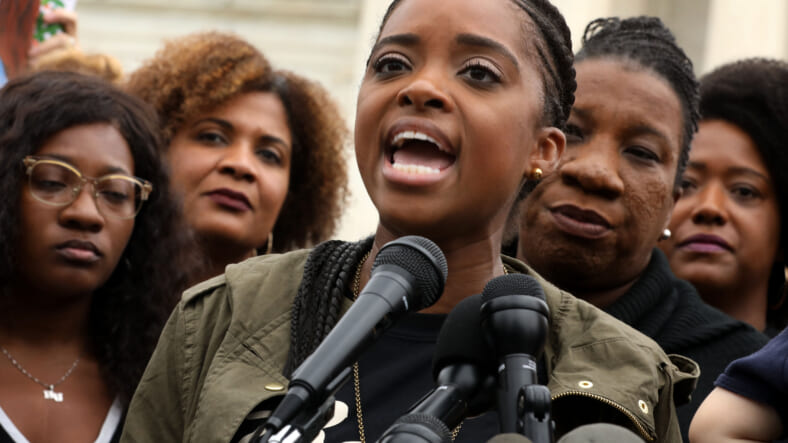 “If Black women were free,” wrote the Combahee River Collective, “it would mean that everyone else would have to be free since our freedom would necessitate the destruction of all the systems of oppression.”

As a Black feminist sociologist who studies race and health equity, I’ve been thinking about this statement while I watch a viral pandemic disproportionately kill a number of African Americans and more Black Americans be murdered by the police. A time in which Black people are trying to stay alive, while fighting to stay alive as parallel plagues rage through America. Although the dominant narrative suggests men, more than women, have been more affected by COVID-19 and police brutality, Black women shouldn’t be erased in time, especially if we all want to get free.

Breonna Taylor, an EMT in Kentucky who was helping those with the coronavirus, died when police broke into the wrong home and shot her in a botched raid. Deborah Gatewood was a Black woman and health care worker at a Detroit hospital, who died after she was turned away four times from her own workplace when she caught the novel coronavirus. Skylar Herbert, a five year-old Black girl, was not free to grow old, rather she became the first child in the US to die from COVID-19 related implications, her parents first responders also in Detroit.

Black women live at the intersection of multiple systems of oppression: structural racism, structural sexism, and capitalism, which constrain the opportunity to live freely and fully. Thus, Kimberlé Crenshaw argued that “any analysis that does not take intersectionality into account cannot sufficiently address the particular manner in which Black women are subordinated.” Intersectional analysis should be employed as a unifying public health framework, especially as related to the pandemic and police brutality.

Numerous health indicators tell us that Black women are already battling for their health and for their freedom. Dorian Mason wrote for Rewire that when the country sneezes, Black women get the flu. This is because, as sociologist Celeste Watkin-Hayes explains, Black women incur mental, physical, and social injuries of inequality stemming from race, gender, class, sexuality, and so on. Put plainly by Historian Treva Lindsey, “Black women are uniquely situated within overlapping systems of oppression to sustain disproportionate losses of both life and livelihood during this pandemic.”

Independently, for example, structural racism has increased COVID-19 risks for all Black Americans, structural sexism made all women more vulnerable to COVID-19 related consequences, and racial capitalism jointly limits the resources poor people of color have to mitigate the effects of the virus.

But Black feminist writers have already told us that examining those systems independently doesn’t paint an accurate picture of how the intersecting systems amplify risks that impact women of color and Black women. For example, Black women are more likely to be in low wage “essential” jobs, including domestic work, which makes them vulnerable to economic disruptions and reduces flexible resources to address health needs. In addition, Black women face race and gender discrimination within America’s health care system that renders them both invisible and incompetent. We cannot forget that both Taylor and Gatewood were health care providers but died at the hands of the pandemic and the police.

Black women’s labor, at work, in households, and in communities, adds to additional physical and emotional health burdens. Within my circle of Black mothers, it was not lost on us that between gasping for air and telling officers, “I can’t breathe,” George Floyd yelled out for his mother. Nor was it lost on the Combahee River Collective that “the psychological toll of being a Black woman and … doing political work can never be underestimated.” To care for our communities amidst the continuous loss is an unbearable grief placed on Black mothers.

As parallel plagues, these same intersecting systems that impact Black women’s exposure to the pandemic also shape their increased exposure to police brutality and mass-incarceration, adding to the avalanche of injuries. Yet, similar to the lack of attention to accurate COVID-19 data, there is a lack of emphasis on Black women. In the #SayHerName: Resisting Police Brutality against Black Women report out of the African American Policy Forum, Crenshaw identifies this erasure: “Although Black women are routinely killed, raped, and beaten by the police, their experiences are rarely foregrounded in popular understandings of police brutality.”

For example, Rhea Boyd argues that police killing Black Americans is one of the oldest forms of structural racism in the US. And though racially segregated areas’ hyper-surveillance of entire communities increases police contact, research shows that Black women and Black girls face multiple forms of violence within these constrained spaces. 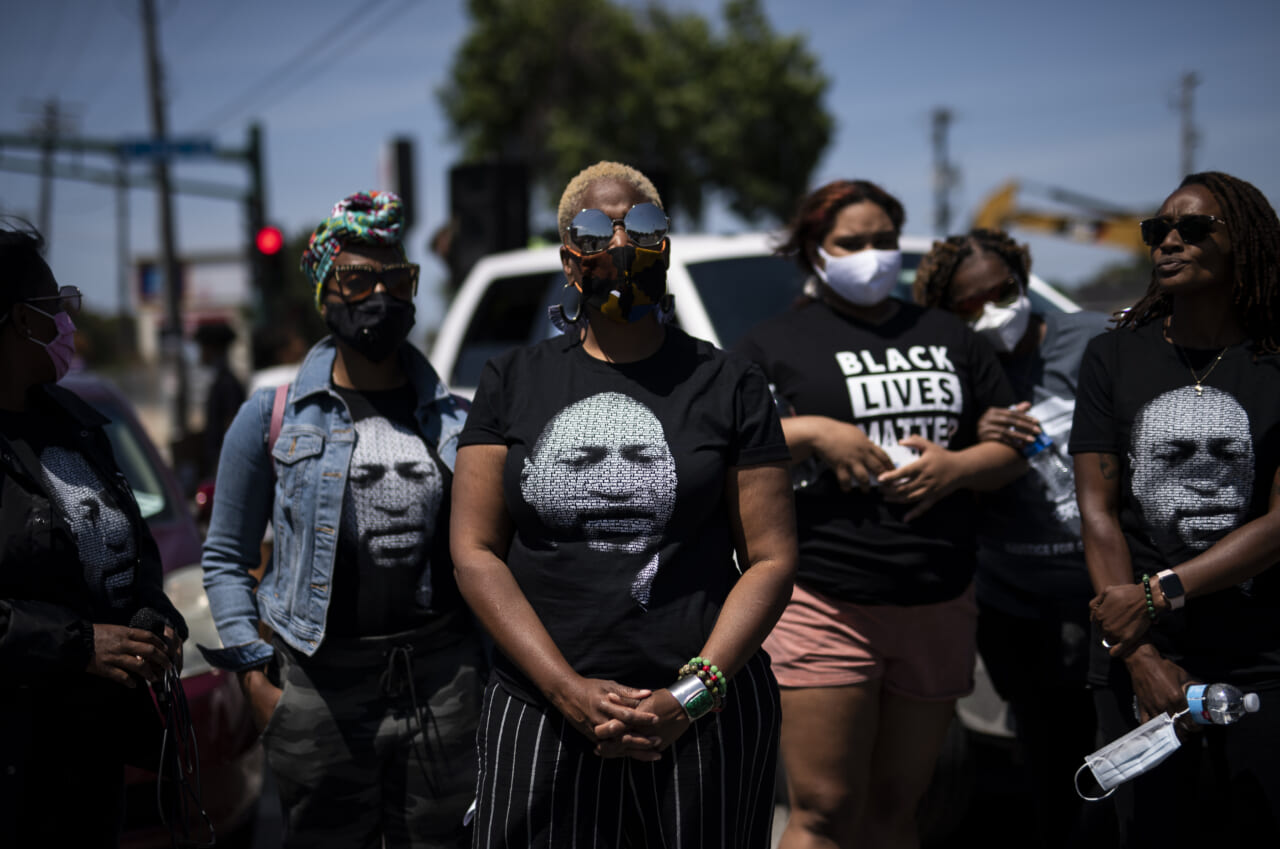 Demonstrators in the BIPOC Mothers March walk from the Third Police Precinct Station to the memorial site for George Floyd on June 14, 2020 in Minneapolis, Minnesota. (Photo by Stephen Maturen/Getty Images)

Even when the harm is indirect there are negative health implications. Exposure to traumatic events online increased rates of PTSD, but even more so in girls. In progress research has revealed that Black women were more likely to have pre-term birth outcomes in the nine months following Mike Brown’s death than the nine months prior, and that the effect is geographically constrained by proximity to the event.

The pandemic and police brutality, and Black women’s erasure within these narratives, is constraining our freedom, and killing our bodies. Although “liberty protects all citizens choices from the most direct and egregious abuses of government power,” Dorothy Roberts tell us in Killing the Black Body, “it does nothing to dismantle social arrangements that make it impossible for some people to make a choice in the first place.”

What might freedom for Black women mean in our current health and police crises? Freedom should include the ability to have enough material resources to make healthy choices and have them actualized without penalty; to work from home and preserve your paycheck, to have a safe, secure non-violent home in which to shelter, to have access to testing when you have coronavirus symptoms, and to be treated with dignity and quality medical care when you are sick. To be free to protest and have others show up to protect you. To be free to exercise outdoors, to run without being hunted, to breathe without a knee in your neck, to sleep in peace and protection in your own home.

RELATED: Black women open up about dating other POC amid Hollywood spotlight

If we all want to be free, we need radical healing and to center intersectional analyses of Black women. As Mason concluded in her article, “Truly investing in the health and well-being of Black women would reform our system and obviate the inevitable scramble to address public health crises like COVID-19.” But even when the vaccine arrives to ameliorate the threat of COVID-19, we are still left with the intersecting systems that constrain our ability to live free from other state-sanctioned harms.

Roxane Gay put in plainly, no one is coming to save us. Therefore, we must remember what Angela Davis taught us: freedom is a constant struggle. We must consistently work to re-build the system in order to amplify Black women’s voices, center their experiences, and prioritize our freedom. Using Black feminism as a framework to deconstruct the systems that constrain and harm Black women is how we all get free.

Let’s all get free.

Dr. Whitney N. L. Pirtle is an Assistant Professor of Sociology at the University of California Merced, and leads the Sociology of Health Equity (SHE) Lab. She is currently co-editing a volume on Black Feminist Sociology. You can follow her on Twitter @thephdandme.