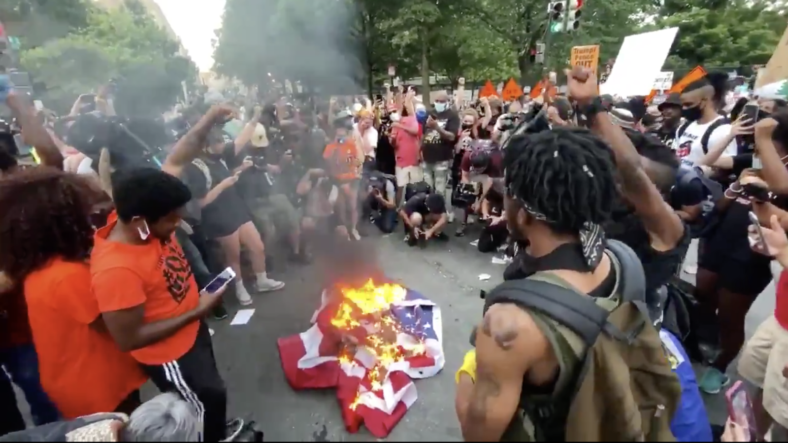 Revolutionary Communist Party protesters burn an American flag outside the White House in opposition to President Donald Trump In a screenshot of a video posted to Twitter.

President Donald Trump has had nothing but scathing things to say about the protesters around the country, particularly those that continue to rally outside the White House.

On Saturday, some of those demonstrators decided to fight fire with fire, literally.

As reported by The Hill, a group of demonstrators gathered at Black Lives Matter Plaza near the White House to burn the American flag and chant “America was never great” on Independence Day.

The group responsible for the flag burning demonstration was the Revolutionary Communist Party, or RevCom for short. The scene followed a speak-out event put on by Refuse Fascism, who has organized a slew of national protests following the president’s divisive South Dakota speech at Mount Rushmore Friday.

After arguments with protesters who disagreed with their action, RevCom have managed to get a larger flag burning outside the gated Lafayette Square to chants of “slavery, genocide and war—America was never great.” Within seconds, it’s reduced to ash. pic.twitter.com/r7VItDanpw

Refuse Facism called for the president’s removal, as well as Vice President Mike Pence. A caption from the website reads: “Trump’s Mount Rushmore speech was a nightmare for humanity. We need to make July 4th a nightmare for the Trump regime.”

People gathered near Lafayette Park, the epicenter for many of Washington D.C. protests stemming from the police killing of George Floyd.

In video footage taken by protesters, the group lit a large American flag on fire, and began a chant for the crowd:

Although the president has yet to respond to this act, he has been critical of people who burn American flags. At his campaign rally in Tulsa, Oklahoma last month, Trump exclaimed that those who burn the flag should be arrested. He expressed a desire to propose that such action should be punishable by at least one year in jail.

The Supreme Court, however, in 1989 ruled that burning the American flag is protected by the First Amendment.