Black militia marches through Georgia Confederate park on July 4: ‘I’m in yo’ house’

About 200 armed protesters strolled through Stone Mountain Park, a park near Atlanta that memorializes Confederate leaders 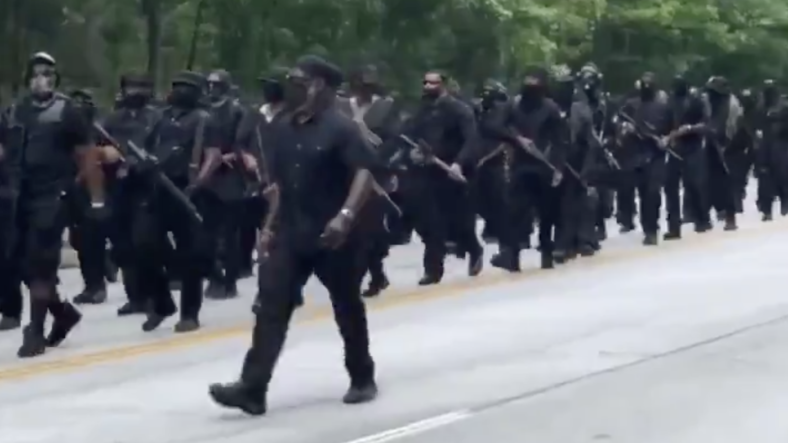 About 200 people, armed with rifles and other weapons, paraded through Stone Mountain Park in Georgia on the Fourth of July in a video posted to Twitter.

A group of mostly Black and mostly armed protesters descended on a Confederate memorial park in Georgia Saturday to stage a demonstration on the Fourth of July, Reuters reports.

Video footage of the scene posted to social media shows about 200 militia members, identified as “Not F**king Around Coalition” (NFAC), marching through Stone Mountain Park, according to Newsweek.

Stone Mountain is a state-owned park in an Atlanta suburb.

The marchers, dressed in all black and some in paramilitary-style clothing, paraded through the park peacefully. Some carried rifles, while others were armed with military-type weapons. Ammunition belts were slung over some demonstrators’ shoulders.

Stone Mountain has been a gathering spot for white supremacist groups like the Ku Klux Klan throughout history. They even meet there on occasions, usually with protesters nearby.

One of the leaders of the July 4 march, who is unidentified, took a knee and spoke into a loudspeaker, calling out said groups.

Black Men are armed and ready at the birthday place of the KKK #StoneMountain pic.twitter.com/mVeSOZHwop

Many statues and monuments made to honor the Confederates have been toppled across the country, either by design or force. Stone Mountain also features a Confederacy commemoration. The giant granite displays a carved depiction of Confederate leaders Jefferson Davis, Thomas Jonathan “Stonewall” Jackson and Robert E. Lee on it.

Reuters further reports that many have called for Stone Mountain’s Confederate monuments to be removed after the killing of George Floyd by Minneapolis Police in late May.

A spokesman of Stone Mountain Memorial Association, John Bankhead, made a statement to WXIA-TV that the armed protesters were peaceful and they had a right to demonstrate there.

Yesterday—NFAC marched into Stone Mountain Park, a popular gathering place for the KKK in Georgia, to call out white supremacist groups. pic.twitter.com/IeIJ6EpAFC

“It’s a public park, a state park. We have these protests on both sides of the issue from time to time. We respect people’s First Amendment right,” Bankhead stated. “We understand the sensitivities of the issue here at the park … so we respect that and allow them to come in as long as it’s peaceful, which it has been.”

Stone Mountain Park had just reopened for the Fourth of July weekend. I had been closed to the public prior to the holiday due to the coronavirus epidemic.