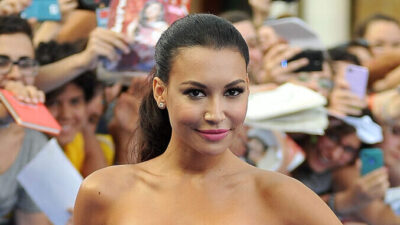 Newly released video footage shows Naya Rivera and her young son arriving at a California lake moments before the actress is believed to have gone missing earlier this week.

As reported by People Magazine, surveillance video captured Rivera, 33, on Wednesday pulling up in a black SUV to a boat launch at Lake Piru, which is about 50 miles north of Los Angeles, and soon after vacating the vehicle with Josey, the four-year-old son she shares with ex-husband Ryan Dorsey.

The Glee actress was wearing white shorts and a backpack, while Josey, whom Rivera helped out of the car, had a backpack on as well. She is seen removing a bag from the vehicle and then walking down the empty lot to the dock.

As they make their way down the dock, they approach what appears to a rental booth where they loaned a pontoon boat. They then get to the boat and ventured east in the water.

After the three-hour rental allotment expired and the boat was not returned, rental staff soon after found the boat out in the lake. Jose was seen in the boat, but Rivera was reported missing.

The Ventura County Sheriff’s Office, who released the footage on Thursday, has since presumed Rivera dead and is currently conducting a recovery mission to locate her body.

Although more than 100 people are a part of the recovery search, Sgt. Kevin Donoghue of the sheriff’s office stated in a press conference that finding Rivera’s body may be unlikely. Donoghue said the process of searching the lake was “complicated” due to poor visibility and heavy debris in the lake, which also “makes it unsafe for divers and a complicated search.”

“If the body is entangled in something underneath the water, it may never come up,” Donoghue stated. “There’s a lot of trees and plants and such that are under the water that can cause entanglement.”

An incident report stated that Josey told investigators that he and his mother were swimming in the lake and that she did not return to the boat. Josey was found wearing a life jacket, while an adult-sized life vest was found in the boat.

“We don’t know if that just meant it was hers or if that was an extra life vest on the boat,” Donoghue said. “But seemingly, if she was somehow incapacitated and she had a life jacket, we would find her floating. Clearly, she is not.”

Josey has since been reunited with his father, Dorsey, and is said to be in “good health.”