The powerful HBO doc directed by Marc Levin taught Tubbs a lot about his dad, who's been incarcerated most of his life 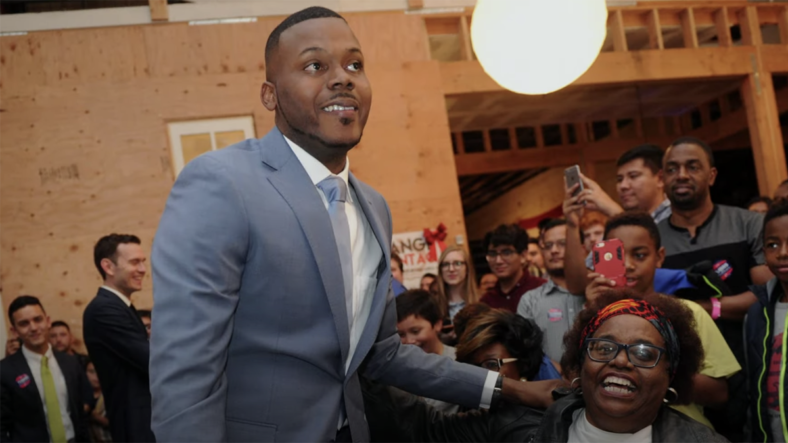 It has been eight years since Mayor Michael Tubbs made history as the youngest person and first Black man to be elected mayor of Stockton, California and the world will get to learn more about his journey in the upcoming HBO documentary Stockton On My Mind.

The film follows millennial Tubbs’ personal and political journey and explores how growing up amid poverty and violence shaped his vision for change. At 26 years old and on the same day Donald Trump was elected in 2016, he became the youngest mayor of a major American city and set out to lead his beleaguered hometown in a different direction.

theGrio caught up with the history-making politician to find out how he feels now that the film that has followed his journey is ready for the world.

“I have a lot of butterflies,” Tubbs admits.

“Stories about cities like Stockton and stories about incarcerated people like my father or single mothers like my mother are usually met with disdain or met with blame and shame. I remember growing up always being taught that our stories were important as inside info, but it wasn’t good to share our story with other people because they might make judgments about us.”

With 300,000 residents, Stockton was ground zero for the subprime mortgage meltdown in 2008 and then became the first major U.S. city to declare bankruptcy. Since Tubbs’ election, he has implented several controversial programs that have proven successful. The bulk of the footage for the documentary was captured in 2018, which is when many of his innovative programs were launched.

“If you’re going to do this, you have to do it in a way that talks about the city and not just me, but the people in this city and why we’re doing these things and why we think it is important,” Tubbs said of deciding to participate in the eye-opening film.

“I think politically in this country, we’re at a moment now when we’re realizing that leadership has to look like me, that everyone has to have a seat at the table in 2020, that we can’t have the same people leading because that’s why we have the world that we inherited today. We have to be just as upset about the problem as we are about the solutions. If the problem is terrible, every solution has to be on the table.”

Viewers will get to see all of the backlashes Tubbs endured from critics across the nation who dismissed his big ideas like a universal basic income and Stockton scholars programs as ridiculous.

“So you’re hearing how we’re talking about how we were thinking about it before we had any real idea what exactly would happen. Back in 2018, everyone thought we were crazy and said it’s going to fail. So looking back now, it’s a little bit vindicating.”

Read More: 5 reasons to watch HBO’s ‘Stockton On My Mind’

Directed by four-time Emmy winner Marc Levin, Stockton On My Mind tells a powerful story about Tubbs and the community he grew up in.

Levin’s work as an independent filmmaker dedicated to telling powerful, real stories in a unique, authentic style has earned him four DuPont-Columbia awards, the Peabody Award, the Grand Jury Prize at Sundance and the Camera d’Or at the Cannes Film Festival.

Levin spent a good amount of time with Tubbs’ father, who has been incarcerated most of his life.

“I still feel a little bit nervous because of that and also because it’s not just me, but my father who I don’t really talk about that often. And frankly, this film has played such a central part in me hearing him speak about the circumstances that led to his arrest. This was actually my first time hearing him explain what happened, the young mayor reveals,” Tubbs explained.

“I was a little bit upset at how much my dad was in the film at first and I actually contemplated just walking away from the project because it wasn’t something I had specifically agreed to.

“After thinking about it for a little bit and after seeing it, I realized just how powerful it was for him to have the opportunity to tell his own story and for me to hear a story that wasn’t filtered through my 10-year-old self’s understanding of what was going on.”

In short, Michael’s father committed his third strike while desperate for money to bury his newborn daughter, who tragically died.

“I’ve never seen my dad interviewed before and this was jarring for me to see on my screen. I mean, it was eerie. That gave me more empathy and more compassion for him,” Tubbs said. “Just hearing why he committed his third strike really kind of connects with the basic income conversation and that it wasn’t for a million dollars. I think he said it was something like $2,000.

“Thirty years of your life because you needed $2,000 to bury your daughter. What type of society do we live in where people have to risk their freedom for the dignity of burying their daughters because they don’t have enough income?”

Stockton On My Mind is available now on HBO.