The actress says the 'America's Got Talent' host may 'regret' being on the wrong side of history. 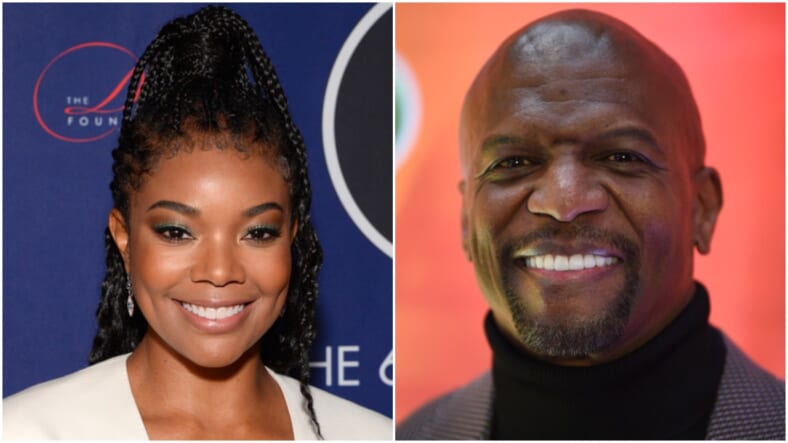 Gabrielle Union has made clear how she really feels about Terry Crews’ lack of support during her controversial stint on America’s Got Talent.

She previously spoke out about the racism and sexism she experienced as a judge on the NBC talent competition series. The Being Mary Jane alum says she was met with toxicity on her very first day when Simon Cowell began blowing cigarette smoke, which the actress is allergic to, on set. After taking her grievances to network bosses, she was fired from the show in November.

Union has since launched a legal complaint against NBC, Simon Cowell and Fremantle and Syco Entertainment.

She spoke further about her AGT experience during a recent interview on the Jemele Hill Is Unbothered podcast. While Union touched on everything from Cowell’s smoking habit, to Julianne Hough’s blackface incident, she didn’t hold back while addressing Crews’ stance amid her firing.

At the time, Crews caught major heat for not publicly supporting Union the same way she had his back when he came forward with claims of being sexually assaulted by another male at a Hollywood party.

Late last year, as Union was speaking her truth, Crews appeared on the Today show to praise NBC and gush about his positive experience as host of America’s Got Talent.

When Hill mentioned his response, Union replied, “The only thing I know for sure is that Terry Crews gets three checks from NBC. So, I don’t know if being worried about job stability — which listen, we all know that if you speak up about racism and white supremacy, you absolutely can be shown the door — I don’t know if that’s the motivation.”

The Bring It On star then referred to his recent tweets warning about the rise of Black supremacy.

“Based on his recent actions, do you really think Terry Crews was an ally, was helpful, was a sounding board?” she asked. “I think Terry Crews is showing us who he is and what he does during times of adversity and it’s not solidarity.”

Union said she was disappointed Crews didn’t publicly support her.

“Not to say if I offer you solidarity I expect you to be the getaway driver during a bank robbery — that’s what he made it sound like in one of those series of tweets,” she explained. “If you saw something, say something. If you didn’t have my experience, you also have an option to say, ‘I believe Gab, I just had a different experience.’ End of story.”

She added, “You don’t have to do a press tour where your sole objective is to discredit and malign me. You know, I’ve been in Hollywood a very long time. There’s very little that surprises me, but that was very disappointing for sure.”

Gabrielle warned that the White Chicks star may “regret” being on the wrong side of history as more details emerge related to her legal complaint.

“Since I’ve been so vocal about what happened, the floodgates have opened. This reckoning is just hitting,” she said “There is so much more that is coming. I have a feeling he will probably regret it for a thousand reasons, very soon.”