Woman explodes in Trader Joe’s after asked to wear mask

Lady claims that her doctor told her not to wear the protective covering, and asking her to wear one breaks 'federal law' 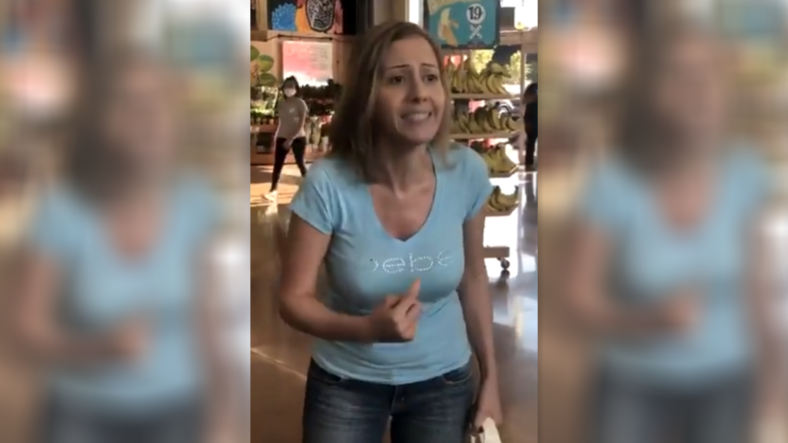 Woman at a Trader Joe’s grand opening has tantrum (Screenshot)

Screaming and crying, a white woman had a hissy fit after being asked to wear her mask in a newly opened supermarket. She claimed that the store’s mask policy violated “federal law.”

She also hysterically asserted that asking her to put on a mask as she shopped, in itself, is a form of harassment imposed by who? Democratic pigs.

Another unidentified white woman had a public meltdown at the grand opening of the North Hollywood location of the popular food market.

A bystander captured the incident and uploaded it to Twitter.

At the beginning of the video, one can hear a voice presumably D. Giles report, “Y’all, Karen is showing out at Trader Joe’s,” as the video plays a middle-aged woman arguing with Trader Joe’s employees.

“She does not have on a mask, and somebody said ‘f–k you, leave,’ and she is having it up.

The woman in question claimed to a “breathing problem.”

However, whatever the unnamed respiratory ailment might have been, it did not prevent her from yelling at the top of her lungs and calling the employees there “Democratic pigs.”

Eventually, she was escorted out of the store after slamming her handcart onto the ground.

But this is not before she pointed at D. Giles’ camera and explained how a male employee treated her.

“That man harassed me for not wearing a mask! I have a breathing problem,” Karen said. “My doctor won’t let me wear a mask. Anyone harassing me to wear a mask, you guys are violating federal laws, you get that? Get that on camera.”

It is also worth noting that were no male employees present in the video.

In response to her rant, D. Giles told the disgruntled white woman that he recorded her tantrum. The fatigued lady stops and looks toward the camera’s direction. This time, not as confrontational. She simply looks defeated.

Many in the nation have taken President Trump’s lead, refusing to wear masks for medical and political reasons. Politics aside, more doctors continue to educate the public on the reasons why no one is exempt from wearing the protective measure.

Business Insider reported, “Various conditions don’t excuse people from wearing masks, but rather emphasize the importance of wearing one correctly.”

It further noted that people with breathing disorders like asthma and bronchitis are more exposed when a mask is used, even as it might be uncomfortable.