Trump evades paying respect to John Lewis: ‘He didn’t come to my inauguration’

President Trump felt that Lewis was not 'impressive' by his standards 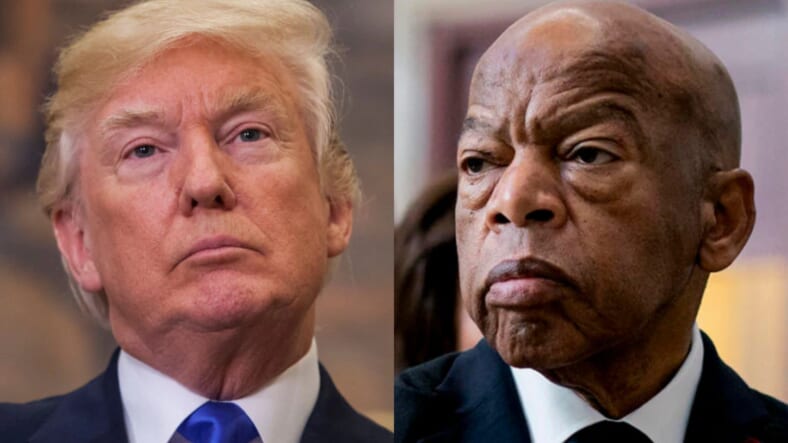 President Donald Trump sidestepped paying tribute to the late Rep. John Lewis and insisted that he had done more for the Black community than the civil rights icon.

Trump was notably absent at the services held for Lewis last week in Atlanta in which three former presidents — Barack Obama, Bill Clinton, and George W. Bush — gave tributes. In an interview with Jonathan Swan for Axios on HBO that aired Monday, the commander in chief was at a loss when asked about the contributions Lewis made to American society.

Lewis died on July 17 after battling pancreatic cancer at the age of 80.

“I don’t know. I don’t know John Lewis,” Trump said. “He chose not to come to my inauguration.”

In 2017, Lewis claimed that Trump was not a “legitimate president,” which resulted in Trump dismissing Lewis as “all talk” and “no action.” Lewis also chose not to attend the inauguration of Bush but the 43rd president honored Lewis at his services by saying he made America a “more better and nobler country.”

Swan tried to get the president to offer more of an assessment and asked him if he believed the congressman who served Georgia for 33 years was “impressive.” Trump once again declined to offer any words of praise.

“He should’ve come. I think he made a big mistake.”

Trump then claimed the mantle of being the president who had done the most for the Black community “with the possible exception” of Abraham Lincoln. He cited unemployment statistics and executive actions taken on HBCU’s and prison reform.

“Nobody has done more for Black Americans than I have,” Trump insisted.

Trump seemingly downplayed Lewis for what he did for African Americans such as championing civil rights.

“He was a person that devoted a lot of energy and a lot of heart to civil rights, but there were many others also,” he said.

Trump did state that he would take no issue with the Edmund Pettus Bridge in Selma, Alabama being renamed after Lewis. In March of 1965, Lewis was badly beaten there during a march for the Voting Rights Act. The encounter was known as Bloody Sunday and it prompted the passage of the legislation as the images of brutality were broadcast.

Read More: John Lewis declares ‘now it is your turn’ in posthumous NYT op-ed on justice

Trump’s comments about Lewis, who has received bipartisan remembrances since his passing, were roundly criticized. Atlanta Mayor Keisha Lance Bottoms declared she was “disgusted” on Tuesday during an appearance on New Day.

“He’s a narcissist and he is delusional. The only person that believes that is him,” Bottoms, a Democrat and potential candidate for Joe Biden’s vice-presidential running mate, told CNN’s Alisyn Camerota on New Day.

“He’s done nothing for African-Americans in this country, and to speak that in the same sentence as speaking of John Lewis is almost blasphemous.”

Trump also caused controversy for his response about the coronavirus pandemic which he claimed is “under control as much as you can control it” in the country.

In recent weeks, the coronavirus rates have been surging. To date, there have been 152,000 deaths and nearly 4.7 million cases. The president declared that death toll “is what it is,” and went on to claim that testing is why the infections were on the rise.