Democrats investigate the head of USPS after sudden changes

Louis Dejoy is a former logistics executive and an ally of President Donald Trump. 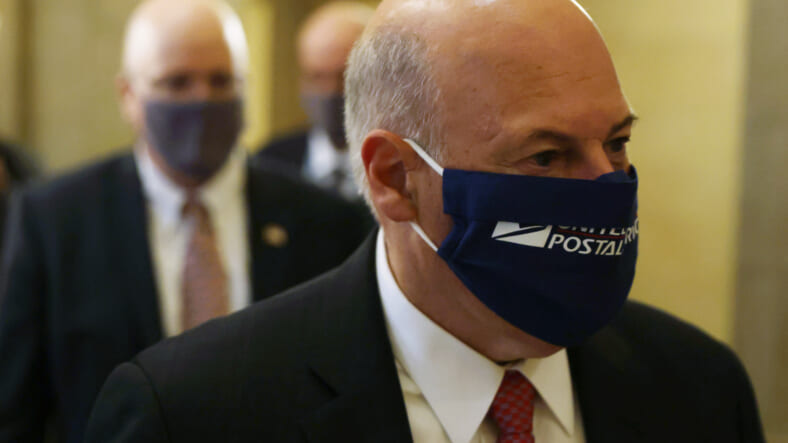 U.S. Postmaster General Louis Dejoy arrives at a meeting at the office of Speaker of the House Rep. Nancy Pelosi (D-CA) at the U.S. Capitol August 5, 2020 in Washington, DC. (Photo by Alex Wong/Getty Images)

Democrats have called for the investigation of the USPS and Postmaster General Louis Dejoy. Dejoy is a friend and supporter of President Donald Trump.

Dejoy was appointment to the position of Postmaster General in May 2020. On Friday, Dejoy released a memo that said two top executives would be removed from their roles overseeing day-to-day operations.

The memo also said that 23 postal executives were reassigned or displaced, according to The Washington Post.

House Rep. Gerald Connolly, chair of the House subcommittee responsible for postal oversight, called the reorganization “a deliberate sabotage” to the nation’s mail service and a “Trojan Horse.”

According to The Washington Post, this change in management could create a rift between postal workers and lawmakers.

One anonymous staffer told The Washington Post that DeJoy’s choices and efforts to reassign people so close to the election date were confusing.

“One of the things that’s led to a lot of head scratching is how some of these folks have been reassigned. We’re not sure he put the right players in the right spots, but maybe he sees something we don’t,” said the staffer.

“We’re all going to wait and see and hope he’s done the right things, but who knows? It looks as if most of the people we’ve all worked with for years and years are still there, just moved around,” the staffer continued.

READ MORE: Postal Service running ‘out of cash’ and that may hurt African Americans

DeJoy’s policies are said to prevent postal workers from working overtime or putting in extra work to deliver mail on time, ultimately affecting the efficiency of mail delivery during the election.