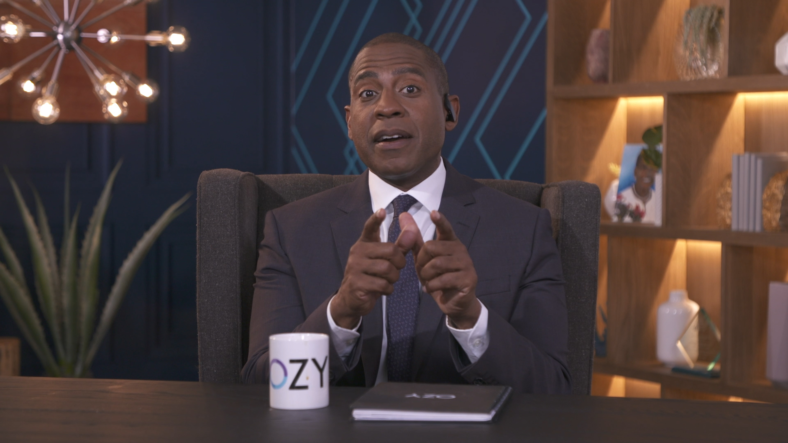 Emmy-award winning journalist and host Carlos Watson is bringing his talents to a new self-titled YouTube talk show where a variety of conversations with colorful guests will be the highlight.

“If ever there was a time to hear from more than the usual suspects, it’s now,” Watson proclaims during the show’s introduction.

By providing viewpoints and facts representative of all sides, Watson brings a new voice to the talk show arena. He doesn’t shy away from asking probing questions that might not always be met with a welcoming response.

For example, in an episode with over 1M views, Watson asks host and actor Terry Crews about his Black Lives Matter stance and other questionable tweets.

Currently, the broadcast is filmed with both host and guest in remote settings as the COVID-19 pandemic continues to force creative shifts. The show is produced by OZY, the media company Watson co-founded with Samir Rao.

theGrio caught up with Watson to discuss the show, OZY media, and more.

theGrio: The Carlos Watson Show has been out for about a week now. What has been the feedback from your observation and that of your viewers?

Carlos Watson: It looks really positive. We had our first million viewers right out of the gate, the very first day. We’ve had terrific guests from [author] Malcolm Gladwell to Rep. Karen Bass to Terry Crews to Bethenny Frankel. I hope it’s doing what we wanted it to do – provide a fresher, longer format, a set of interviews where people can get more real than maybe they do in 4 or 5-minute sound bites.

TG: Can you expand on some of your goals?

CW: I feel that this year, 2020, is as important a year that the US or the world has seen, maybe, since 1968. There’s so much at stake between the pandemic, elections, Black Lives Matter, and even the economy, that I think we need space for a more important and substantive conversation. A lot of times all that’s left is comedy. I think that’s good… but we also need a place to have real conversations and I’m hoping that’s part of what we can do.

TG: What criteria do you use to select guests?

TG: What are some of your favorite moments or conversations so far?

CW: So many of them. I love Karen Bass, [and] I loved her talking about the possibility of her becoming VP and her road into politics and becoming a serious martial artist as well. Terry Crews talked about the controversy around Black Lives Matter and some of his comments. It’s fascinating to hear from Bethenny Frankel about how she went from being Paris Hilton‘s babysitter to a really cool mogul. It’s been a good and rich set of conversations.

TG: Beyond the guests that you’ve already booked, is there anyone that you hope to have on in the future?

TG: Outside of your own media, what are you reading or listening to or watching, whether it’s for entertainment or to stay informed?

CW: A number of good things. I was watching The Godfather of Harlem which is really good. I love documentaries and there are a couple of good ones like Ken Burns‘ Vietnam War documentary which is really strong.

TG: What is something you want audiences to know?

CW: Six years ago, I helped start OZY media. OZY started as kind of an online magazine with great newsletters and a great website and social feeds that would bring people the new and the next. Over the last couple of years, we’ve evolved from just being a digital magazine to a broader media company. We produce a variety of TV shows for Hulu, for Amazon, for OWN, and for others. We produce award-winning podcasts. We produce really great summer festivals.

This is a really diverse and exciting media play and I’m just very proud of that. We just got nominated for an Emmy for one of our TV shows, Black Women OWN The Conversation. It’s a really, really terrific thing so I’m excited.

Watch The Carlos Watson Show daily on the OZY YouTube channel , official website or listen to the podcast.