Black man shot 11 times as he walked away from police

The American Civil Liverties Union of Louisiana has issued a statement in the wake of Friday night's shooting. 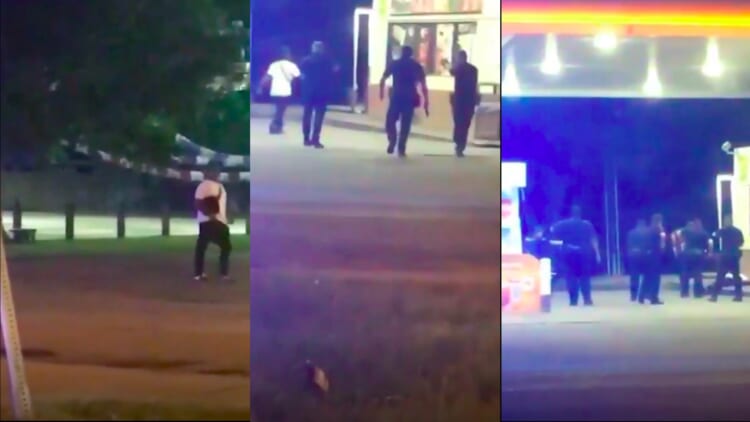 On Friday night, Treyford Pellerin, 31, was shot 11 times by police as he attempted to walk away from them. The incident was captured on a video recording that quickly went viral.

The fatal incident occurred outside a gas station convenience store in Lafayette, Louisiana, after a handful of police officers responded to a call reporting a disturbance.

According to Rickasha Montgomery, the eyewitness who recorded the video, Pellerin appeared to be holding a knife.

In the cellphone footage taken at the scene, the officers ordered Trayford to get on the ground, but he continued to walk swiftly toward the convenience store. An onlooker yelled out that the police were tasing him, but Pellerin remained upright.

Before he was able to enter the store, police officers shot him 11 times at close range.

Montgomery told the Lafayette Daily Advertiser that Pellerin appeared to be holding a knife, but Louisiana State Trooper Derek Senegal would not confirm whether or not he was carrying a weapon.

“When I heard the gunshots, I couldn’t hold my phone like I was first filming,” Montgomery said. “I feel kind of scared about it. I’m traumatized. You’re so used to hearing about this, but I never thought I would experience it.”

Distinguished civil rights attorney, Ben Crump accused the police of acting as the “judge, jury, and executioner” of Treyford Pellerin.

Scott Morgan, Lafayette’s interim police chief, told The Acadiana Advocate that “Friday night marked the third shooting a Lafayette Police Department officer in the past five or so weeks.” Morgan added that the officers involved in the convenience store shooting will be put on paid administrative leave.

The American Civil Liverties Union of Louisiana has issued a statement in the wake of Friday night’s shooting. “Once again video footage has captured a horrific and deadly incident of police violence against a Black person who was brutally killed in front of our eyes,” said Alanah Odoms Hebert, executive director of the ACLU of Louisiana.

“While we need to know much more about what occurred last night, we know that it began with a routine ‘disturbance’ call and cell phone video from the scene clearly shows Mr. Pellerin moving away, not towards, police officers, only to be tased and then brutally shot dead. Trayford Pellerin should be alive today. Instead, a family is mourning and a community is grieving,” Odoms continued.

“The ACLU of Louisiana will continue to demand justice for this brutal killing and push for reforms that will end the epidemic of police violence once and for all,” she concluded.