OPINION: The GOP's only goal is to keep Trump in power and will simply destroy any chance of a functional election. 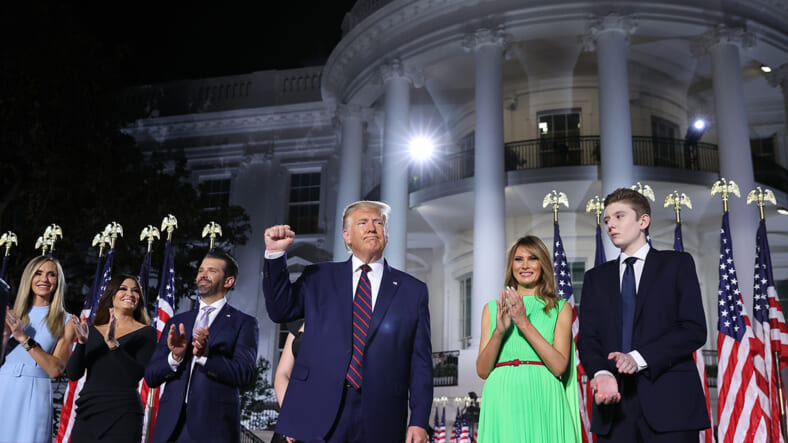 U.S. President Donald Trump (C) reacts as he stands with his family members after delivering his acceptance speech for the Republican presidential nomination on the South Lawn of the White House August 27, 2020 in Washington, DC. Trump gave the speech in front of 1500 invited guests. (Photo by Chip Somodevilla/Getty Images)

I don’t care if you’re playing backyard football, having a dinner party or dropping off the kids at your Mom’s house, there have to be ground rules. Rules that everybody agrees upon about how we’re going to go about doing this thing that everyone involved believes is important and needs to be done.

I quite famously don’t know how to play spades, but even I know that you can’t switch up the house rules from Joker Joker Deuce Deuce to Ace High after everyone has already sat down at the table and picked a partner.

Everybody has to know rules and agree to the rules before the game starts, otherwise, you’re not really playing, or worse, you are playing two completely different games. That is what is happening right now in America and it was made crystal clear Thursday night when Donald Trump formally accepted the Republican Party nomination for president.

There is no 2020 election. That requires two sides playing by mutually agreed-upon rules to play the game. The Democrats are running an election campaign for Joe Biden, the Republicans, on the other hand, are just doing whatever they can to consolidate power and keep Trump in office by whatever means necessary.

Trump isn’t subtle about anything, but during the four days of the RNC, the plan was in plain sight. Donald Trump’s intention has always been to establish an American dictatorship revolving around his family and their minions. He regularly states that he should be allowed to stay in office as long as he wants, that he can jail his political and media critics, and that he can ignore or worse change the rules of American elections whenever he chooses.

That’s been the case since he got into office four years ago despite the vast majority of the country not voting for him. However, usually, there is some pretense of running a campaign for re-election, tossing out a few policies here and there, making a speech about the future, the political equivalent of putting on a headband, sweats and doing overly elaborate stretches on the side of the court even though you know full well you aren’t going to play.

The thing is, we know how Trump hates to exercise, and he definitely gave up any effort to engage in re-election friendly activities months ago. The White House didn’t bother with a COVID-19 management plan because they thought it would only kill people in Blue States.

With Trump’s approval, Senate Majority Leader Mitch McConnell threw up deuces to the idea of a second COVID-19 stimulus package despite over 30 million Americans being unemployed and benefits running out a month ago. A recent New York magazine article pointed out that the Trump campaign has no ground game and volunteers don’t even show up to the most basic events across swing states.

Most tellingly, Donald Trump, the supposed master of branding and TV has produced a week-long dud with the Republican National convention. The ratings for the RNC convention were trash compared to the Democratic National Convention just a week ago. Nothing that the Republicans are doing right now looks like an actual re-election campaign. Then it dawned on me — they aren’t running a re-election campaign.

Trump does not care about Democracy, and the Republican Party is not interested in gaining the most votes from the public. They aren’t interested in rolling out new policies, they couldn’t even be bothered to come up with a convention platform other than a loyalty pledge to Donald Trump.

Do you know what they are doing? Destroying mail sorting machines and closing mailboxes to slow down or impede voting by mail during COVID-19. They are gutting voting protections. They are making sure there is little or no coordinated federal response to election hacking domestically or abroad.

This is not an issue of Democrats playing checkers while the GOP is playing chess, or even Democrats bringing a knife to a gunfight.

Read More: Trump refuses to agree to accept 2020 results if he loses to Biden

The GOP isn’t playing the election game better, they aren’t playing the game at all. Some members of the national media are desperate to engage in horse-race coverage, obsessing over every single poll and doing a deep dive into each insignificant moment of the Republican National Convention. What most of them fail to realize is that there is really only one horse running around the track.

And that horse is actually a donkey.

The Republicans’ only goal is to keep Donald Trump in power, and since they know that no amount of campaigning, commercials, or flashy four-night infomercials will convince enough Americans to vote for him, they will instead focus their remaining time on simply destroying any chance of a functional election.

Let me be clear, I am not blaming the Democrats for this. We are in unprecedented times. And by unprecedented, I mean Donald Trump held an entire campaign event on government property, a complete violation of the Hatch Act (which says you can’t use government property for specific campaign purposes) on prime time television for four nights and most news pundits could only muster the strength to say he was ‘violating norms.’

The only thing Democrats and Americans who care about Democracy can do is vote and vote in such overwhelming numbers this November that Trump can’t lie, cheat or manipulate his way into staying in office. A 49-to-47 margin in Michigan favoring Biden in August can flip to a Trump victory in November without causing too much alarm.

But a 52-to-45 margin in Michigan in August turning into a Trump victory in November will be almost impossible to excuse, even by the most deferential of media voices.

Register, get your absentee or home ballot and drop it off as soon as early voting is available in your state. Get everyone else you know across the country to do the same. Do not vote this year like it’s a competition because it isn’t. That requires two sides competing and Republicans aren’t competing for anyone’s vote. They are only doing what is necessary to stay in power.

The sooner we realize that the better chance we have of stopping a complete fascist takeover that I promise you will be a hundred times worse than anything Trump has done already.