As the racial climate in America grips the nation, Michelle Obama says she sees 'glimmers of something different' in demonstrations for justice 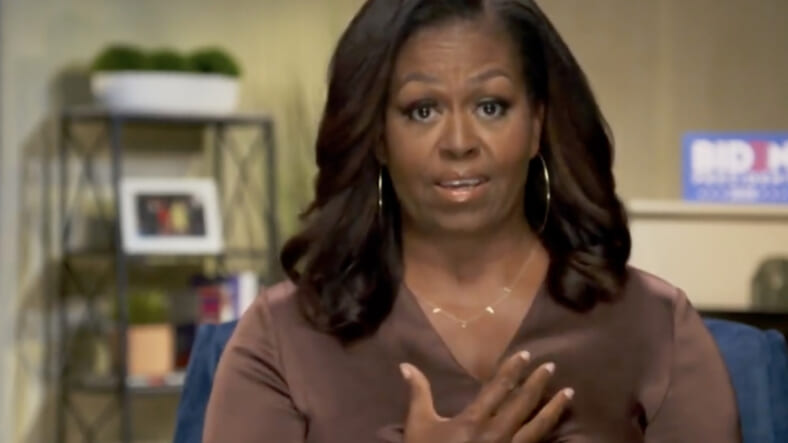 In this screenshot from the DNCC’s livestream of the 2020 Democratic National Convention, Former First Lady Michelle Obama addresses the virtual convention on August 17, 2020. (Photo by Handout/DNCC via Getty Images)

Kenosha, Wis. has been a scene of tragic, gun-related violence this past week, starting with the police shooting of an unarmed Black man followed by the fatal vigilante shootings of protesters at subsequent demonstrations.

Former First Lady Michelle Obama issued a statement on Friday, speaking about her feelings of the shootings.

Jacob Blake, a 29-year-old father, was shot seven times in the back by police and has been paralyzed from the waist down as a result. A 17-year-old suspect has been arrested in connection to the killing of two demonstrators.

“I’m just devastated by the shootings in Kenosha,” Obama stated on Twitter. “Like so many of you, I’m exhausted and frustrated right now. It’s a weight that I know Black and Brown people all across the country are shouldering once again. And we’re so often left wondering how things will get better.”

She also encouraged her followers to take action, posting a link to resources listed on the Obama Foundation website.

READ MORED: RNC is our last reminder that Republicans don’t plan on a fair play election

After the shooting of Blake on Sunday, which was captured on video, protesters took to the streets that day forth to demand justice. Three demonstrators were shot Tuesday. Kyle Rittenhouse, a right-wing teenager who traveled from Illinois to Wisconsin armed with an assault rifle, faces homicide charges after two of the victims succumbed to their wounds, CNN reports.

“These past few months, I’ve been thinking a lot about what our kids are seeing every day in this country — the lack of empathy, division stoked in times of crisis and age-old and systemic racism that’s been so prominent this summer,” she continued.

Obama, however, signaled that she sees “glimmers of something different” in the groundswell of action that is on display across the country, and reminded people to register to vote.

“These protests and actions will not make Jacob Blake walk again. They will not erase the trauma from those children. And they will not bring back anyone who’s been taken from us. But they will do something,” she said.

“I want to encourage you all to keep using your bullhorns and your ballots to reform policies in our cities and our neighborhoods,” Obama continued.

“And maybe we can prevent the next name from being added to this seemingly unending list of tragedies.”