'Malcolm & Marie' is the first film shot after coronavirus quarantine

While many of us are being frugal with our coins during the pandemic, Netflix is saying ‘carpe diem.’ The streaming service recently wrapped up a deal acquiring the rights to Malcolm & Marie, a love story staring Zendaya Coleman and John David Washington for a $30M.

It is the largest amount paid for a film acquisition out of a film festival, according to the Daily Mail. In this case, it was the Toronto Film Festival, which was largely virtual this year.

Read More: ‘Tenet’ looks to the future but remains stuck in the past with familiar trope

The romantic drama is directed by Sam Levinson who is also behind Zendaya’s HBO series Euphoria. In a statement, the director boasted about Netflix and pulling off a movie production in strange times. 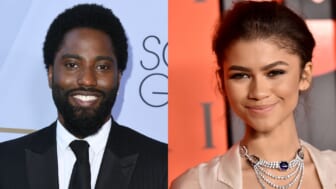 “I am so grateful to this cast and crew, many of whom are my Euphoria family, for coming together during such uncertain times,” says Levinson. “We felt privileged to be able to make this film together and we did so with a lot of love. We are all thrilled that it has ended up with Netflix which is unparalleled in allowing filmmakers the freedom to tell their stories that reach audiences all over the world.”

In the film, Washington plays a filmmaker and Zendaya is his girlfriend. The couple begins their evening at a big movie premiere but things quickly turn left on their ride home when the couple starts discussing their past relationships. The conversation becomes more intense than either expected challenging their union.

The black and white film was shot in the midst of the pandemic and is the first film completed after the coronavirus lockdown. According to Harper’s Bazaar the film took extreme precautions due to the pandemic.

Cast and crew were quarantined two weeks before shooting and once on location at the eco-friendly Caterpillar House in Carmel, California, they could not leave the premises. There were daily temperature checks and social distancing was enforced as much as possible.

The film is being compared to Marriage Story and supposedly covers many current social issues. Specific details are still oh the hush and it’s unclear when the movie will be available for streaming on Netflix.