EXCLUSIVE: The Georgia U.S. Senate candidate reflects on his connection to the civil rights icon from the campus of Morehouse to the pulpit of Ebenezer Baptist Church 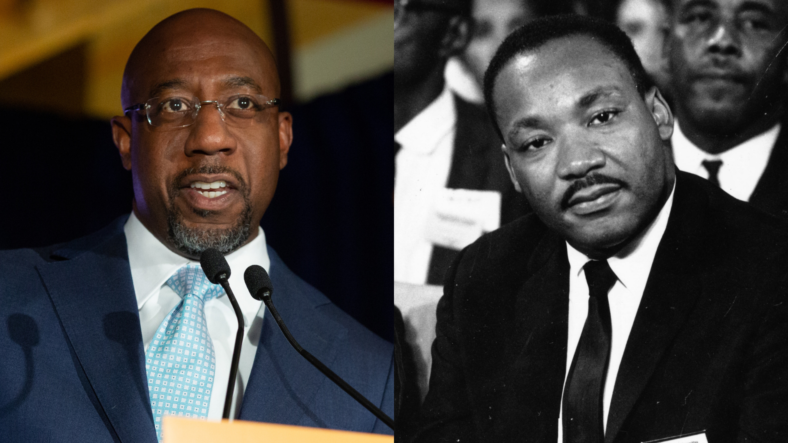 But no Morehouse graduate is as revered and globally recognized as the HBCU’s most cherished alumnus: Dr. Martin Luther King Jr.

King, who first attended Morehouse at only 15, was a second-generation student who studied sociology on the storied campus before ultimately going into ministry. Warnock, who was born and raised in Georgia, says it was Dr. King who “recruited” him to attend Morehouse.

“Dr. King’s spirit recruited me to Morehouse. I was born a year after his death, but I was inspired by him early on,” Warnock told theGrio during a recent sit-down interview. “I wanted to be in this place that focused not only on information but inspiration; focused not only on training the head but tuning the heart toward the goal of making a difference in the world.”

Because of King’s influence, Warnock said when it came time to apply for colleges his senior year of high school, it was a no-brainer.

“I didn’t want to go anywhere else. I applied to a few other schools because they say you’re supposed to, but I was clear that I wanted to be on the campus that shaped and inspired a young 15-year-old named Martin Luther King Jr., who, while he was a student at Morehouse read H.D. Thoreau’s essay on civil disobedience — he was already thinking about change, as you can see in an essay that he wrote while a student at Morehouse,” said Warnock.

“It’s really inspiring to think about someone that young thinking about public service and about the meaning of education at such an early age.“

Warnock and King, however, share more than the same alma mater. Since 2000, Warnock has served as senior pastor at the historic Ebenezer Baptist Church, where Dr. King was a co-pastor alongside his father, Rev. Martin Luther King Sr.

It’s that connection and his experience behind the pulpit that Warnock believes gives him a greater perspective for what Georgians need from their elected officials and government.

“I think some may wonder why would a pastor be running for the US Senate? It is a shift, to be sure, but it’s not as large of a leap as some might think,” said Warnock, who is heading into a runoff against incumbent Sen. Kelly Loeffler on Jan. 5.

“My ministry has been about work in the public square. I have been very focused on making a difference in the lives of ordinary people. I’ve been very focused on standing up for health care because I believe it’s a human right. [I’ve been] fighting for voting rights. As chairman of the new Georgia Project, I’ve worked beside Stacey Abrams. We registered 400,000 new voters in the state.“

He added, “My church has raised offerings just to bail poor people out of jail because they’re awaiting trial. They’re there not because they were dangerous, but because they couldn’t afford to bail while fighting for bail reform … this is the work that I’ve been doing and as part of my ministry, and now what I hope to do is translate my years of activism and creative agitation into legislation.”

Warnock says his life experiences as a church leader has informed how he could bring change to the lives of everyday people — including the challenges he faced as a young student on the campus of Morehouse.

“I absolutely could not afford to go to Morehouse College. The year I went, my family’s income was equal to the tuition, room and board. I got off to a little bit of a rough start. I remember that when I arrived at a lot of guys from more prominent families were doing well. They were dressed well, some of them were already driving,” Warnock recalled.

While he was able to get through his studies at Morehouse thanks to a Pell Grant and low-interest student loans, Warnock says the challenges college students face today are far greater.

“I’m running for the U.S. Senate in large measure because it’s harder now,” he said. “I want to stand up for those kids, not only in urban environments and public housing projects like the one I grew up in, but in rural, white, disaffected communities all across the state. I want to make sure that we invest in working families and in their children.”

For naysayers who may feel as though a preacher such as himself shouldn’t be running for U.S. Senate, Warnock argues that non-career politicians are exactly what Congress needs right now.

“I think we have too many careerist politicians who are just trying to think about how they either hold on to this office or get the next highest office. And, you know, we all understand ambition, but the problem is some more often they’re so focused on the next election that they’re not able to think about the next generation,” said Warnock.

For the career minister who grew up in public housing in Savannah, Georgia, Warnock says his campaign for office is not about him, but about the people.

“My highest ambition is not politics, it’s service. Service is my highest ambition, and I think that that gives you a kind of freedom to embrace the office, but to wear it like a loose-fitting garment so that you’re not bound by the office but bound by your commitment to the people that you were sent there to serve,” he said.

“What I have tried to do in all of my years of service as a leader is to never make it about me. It’s about the folks that I’m trying to serve.“