OPINION: Now is the time for Scott to do his job, hold this president accountable, and decide exactly which side he is on. 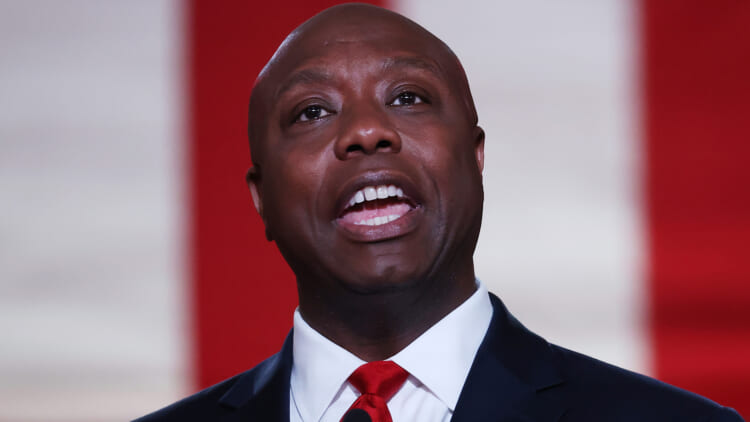 U.S. Sen. Tim Scott (R-SC) stands on stage in an empty Mellon Auditorium while addressing the Republican National Convention at the Mellon Auditorium on August 24, 2020 in Washington, DC. (Photo by Chip Somodevilla/Getty Images)

Senator Tim Scott of South Carolina opposes the impeachment of Donald Trump, reflecting a long history of the junior senator caping for a white supremacist — who just incited a deadly U.S. Capitol insurrection — in the White House.

Now is the time for Scott to do his job, hold this president accountable, and decide exactly which side he is on.

With the House impeaching Trump for a second time — this time for “incitement of insurrection” in a 232-197 vote, with 10 Republicans voting with the Democrats — the Senate will have a trial to decide whether to convict Trump. On Jan. 12, a day before the historic vote, Scott made his feelings about impeachment known.

“President Trump has eight days left in his term and has promised a smooth and peaceful transition of power. The Democrat-led impeachment talks happening in the House right now fly in direct opposition to what President-elect Joe Biden has been calling for all year,” Sen. Scott tweeted.

“An impeachment vote will only lead to more hate and a deeply fractured nation. I oppose impeaching President Trump.”

In many ways, Scott sounds a lot like Sen. Lindsey Graham (R-S.C.), who told Biden to reject impeachment because it would be “destructive” and “will further divide the nation,” and Sen. Susan Collins (R-Maine), who voted against impeachment the first time around, justifying her decision by claiming Trump learned “a pretty big lesson” from impeachment. That makes sense if Collins meant Trump learned he could give the green light for a Klan massacre at the Capitol to overturn the election he lost.

Read More: Can we talk about the Republican Party’s white women problem?

If Senator Scott knows his history, he knows that America had a coup attempt similar to this one, and for the same reasons. In 1898, a lynch mob of 2,000 white men waged a racial massacre in majority-Black Wilmington, North Carolina. The angry mob staged an insurrection against the city government, and replaced the city’s Black and white elected leadership with themselves. The purpose of the insurrection, in which hundreds were killed, was to restore white power and white supremacy, and stop Black folks from voting. And it was the only coup on U.S. soil — until 2021.

The Capitol insurrection, like the Wilmington insurrection, was all about white people overthrowing the government and maintaining white power. This time, it was for Trump, and about nullifying the Black vote that elected Biden and Harris. And this is the man that Tim Scott is providing cover for.

The lone Black Republican in the Senate has done some good for underserved communities during his time on Capitol Hill. For example, his police reform proposal, the Walter Scott Notification Act, would establish a national database on police deadly force incidents. The senator has spoken out about the racism and police racial profiling he has faced, along with threats, racial tirades and accusations he is a token “Uncle Tim” in the Republican Party.

He championed the First Step Act, the criminal justice reform package for reducing recidivism and helping transition incarcerated citizens back into civilian life. Further, Scott has committed to investment in Opportunity Zones to combat poverty and create jobs in economically disadvantaged communities.

Despite the good work he apparently tried to do, Tim Scott voted to repeal the Affordable Care Act, supported Trump’s Supreme Court picks and voted for the tax cut. And he has toned down his language when speaking about Trump’s racism.

Scott pushed back too softly and gently against Trump when his president called Black nations s***hole countries, and said there were “very fine people” on both sides in the deadly 2017 white supremacist confab in Charlottesville, Virginia. The senator said Trump “misspoke” when he refused to condemn white supremacists in a presidential debate with Joe Biden, and criticized the president for retweeting a “white power” video. Moreover, Scott compared Trump’s first impeachment to a “political death row trial.”

Moreover, Scott said some people “enjoy” talking about systemic racism, and declared “We are not a racist country. We deal with racism because there is racism in the country … Both are true. They are not mutually exclusive.” And at last year’s Republican National Convention, Sen. Scott was carrying much water for Donald Trump, claiming “our nation’s arc always bends back towards fairness” and saying “Our family went from Cotton to Congress in one lifetime.” He warned that Joe Biden and Kamala Harris “will turn our country into a socialist utopia,” and proclaimed: “We don’t give into cancel-culture, or the radical — and factually baseless — belief that things are worse today than in the 1860s or the 1960s.”

My people have lived in the Gullah Lowcountry of South Carolina since around 1700. During the Civil War, my great-great-grandfather, Henry Whaley, escaped from the plantation in Pineville to Charleston with his parents, a baby strapped on his mother’s back. They were part of a group of self-liberating folks fleeing from the plantation police. When Henry wouldn’t stop crying, his mother was prepared to kill the baby, then herself, rather than risk being captured by the paddy rollers. Thank God she didn’t have to.

In 2021, the police and the white mobs are still chasing Black people, and white supremacy is still trying to kill us. This time, white domestic terrorists threatened to overthrow the government and wage a massacre under Trump’s direction.

Although there is much we have yet to learn about Jan. 6, we do know that according to a “Stop the Steal” organizer, U.S. Reps. Paul Gosar, Mo Brooks and Andy Biggs helped plan the rally-turned-coup. Unnamed lawmakers gave reconnaissance tours of the Capitol to sketchy individuals the day before the siege. Police officers, enlisted soldiers and veterans were among the insurgents.

The white domestic terrorists had Confederate and Nazi flags, a noose and gallows at the Capitol and wanted to hang Vice President Mike Pence and kill Speaker Nancy Pelosi. Rep. Alexandria Ocasio-Cortez feared she would be kidnapped and assassinated. The mob found the secret office of House Majority Whip James Clyburn of South Carolina, who said it was an inside job, and someone removed the panic buttons from Rep. Ayana Pressley’s office before the attack. We are only scratching the surface.

Yet, according to Senator Scott, Trump wants peace, and impeachment is bad for the country. What’s bad is Scott’s complicity in playing the role of negro whisperer and providing cover for white supremacists when they’re called out on their racism.

You know that Black South Carolinians deserve better than this. By the way, Senator Scott is up for reelection in 2022.