DJ Spinderella has been shut out from the Salt-N-Pepa biopic that premieres on Jan. 23 on Lifetime, and she’s none too pleased about the glaring omission.

“Sorry but I gotta speak on this Lifetime special. Too often, Black women who have made meaningful contributions in their industry are left out of historical narratives,” Spinderella explained. “Back when Salt n’ Pepa was building our legacy, which is rooted in empowering women, I could not have dreamed that this same group would one day disempower me.”

“Words cannot fully express my disappointment when I learned a decision was made to move forward with a Lifetime biopic that wrongfully excluded me from every aspect of development and production… all the while using my image throughout, given that I played an integral role in the group’s story and success,” she continued. “There’s nothing more unacceptable than a woman being silenced by another woman.” 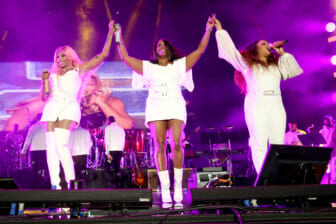 “I do, however, want to offer a huge congratulations to the talented actresses that represented us, including Monique Paul, who I wish would’ve been given an opportunity to share my true perspective with,” Spinderella explained.

“In reflection, I’m grateful I’ve managed to uphold a 30-year career of truly empowering women with my gift, against all odds. This will continue in my work and in my service,” she said.

Ending the series of tweets on a positive note, the The 50-year-old former DJ for the famous girl group went on to say, “the great news is I’m in the final stages of writing my memoir, a personal journey navigating through life, relationships, and the industry that raised me.”

“30+ years is a lot of content and I’m ready to share. Thank you, as always to my family, friends, and loyal followers of Team Spin. I’m forever grateful to all of you for your support and love throughout the years,” she said.

Spinderella first joined Salt-N-Pepa in 1987 after replacing DJ Latoya Hanson when she was just 15-years-old. After decades with the group, she announced via Instagram in May 2019 that she received a “termination email” earlier that year, ET Online reported.