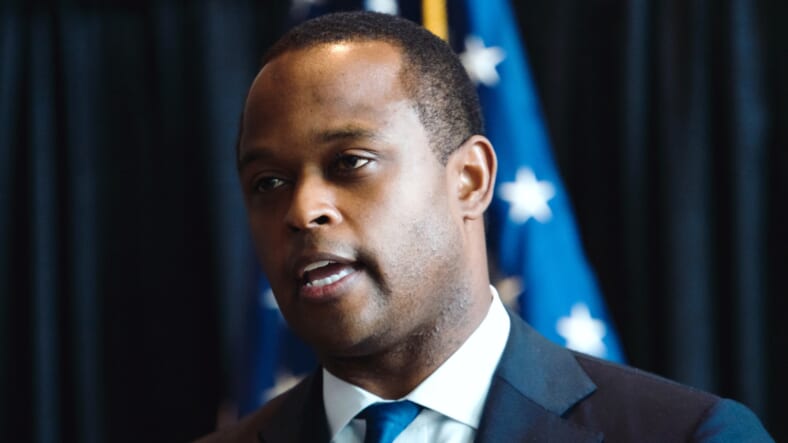 Daniel Cameron, the first Black attorney general from the great state of Kentucky via the Mitch McConnell plantation, probably could not have imagined a Black woman named Breonna Taylor — or any Black woman — could cost him his job.

And yet, here we are, with calls for his impeachment, because he would dare disrespect the name of a Black woman in death and stand in the way of justice — just to please the police who endorsed him, and the Republican base that voted for him.

Taylor, 26, an EMT professional, was riddled with police bullets while sleeping in her bed on March 13, 2020. With a no-knock warrant to look for drugs that did not exist, white plainclothes officers broke into her home and shot her to death. Cameron was the special prosecutor appointed to review the fatal shooting.

As theGrio reported, three grand jurors in the police murder case of Breonna Taylor have filed a petition to impeach Cameron over his handling of the proceedings and allegations of prosecutorial misconduct. The petition alleges Cameron breached the public trust and the duties of his office when he misrepresented the findings of the grand jury in the Taylor case.

While Cameron publicly announced that his office presented the grand jury with “every homicide offense” and provided them with “all of the information” related to the police officers who killed Taylor before they made their decision, the grand jury members allege Cameron lied and withheld evidence from them.

Those jurors say Cameron presented them with no homicide charges and gave them a total of only three charges — wanton endangerment charges for Detective Brett Hankison. When grand jurors — who are randomly selected individuals — decide to come for a prosecutor, you know something is not right.

There was no reason to believe Cameron would look out for people who share his skin. The man made his bones in the Senate, where as general counsel for Mitch McConnell, he helped paved the way for white nationalist judges on the federal bench. Cameron ran for state attorney general as a water carrier for the Trump agenda. He was also endorsed by the Fraternal Order of Police.

“The law enforcement community knows where I stand on the issues and the FOP has complete faith that I can lead the office of attorney general effectively into this next decade, especially in light of the drug challenges, which in my judgment is the public safety challenge of our lifetime,” Cameron said of the FOP endorsement.

Read More: Something is fishy about Daniel Cameron and the Breonna Taylor case

An affiliate of the Republican Attorneys General Association (RAGA) supported Cameron with the most money spent in television ads in that race. As Kentucky attorney general, Daniel Cameron, a RAGA member, joined a lawsuit seeking to end the counting of mail-in ballots in Pennsylvania after Election Day, an effort to overturn the presidential election for Donald Trump.

Why should Daniel Cameron concern himself with how Pennsylvania counts its votes? It is no secret that Trump and his minions sought to erase the votes of Black people in key states such as Pennsylvania, Georgia, Michigan, Wisconsin and elsewhere — because Black people and their votes are not regarded as legitimate by the Republican Party. And Trump’s GOP cannot win if those who are not white are allowed to vote.

Even when attempted election theft fails them after failing to win elections, Republicans and their confederates have resorted to violence, armed insurrection and domestic terrorism. The jurors accuse Cameron of “incitement and support of insurrection and violence” regarding his involvement in RAGA, which funded robocalls urging people to “stop the steal” at the U.S. Capitol on Jan. 6. RAGA also met with Trump on the eve of the Capitol attack at the Trump International Hotel.

Cameron claims he has no knowledge of the robocall, but there is blood on his hands. And now, when Cameron took to Twitter to celebrate Black History Month, Rihanna responded: “Sup nigga? #JusticeforBreonnaTaylor.”

He blocked justice for Breonna Taylor — a Black woman killed by police for simply being home while Black — and he sought to block the votes of Black people who made Biden the president. Finally, Daniel Cameron broke bread with those who attempted to block democracy with white mob violence. That’s why he must go.