Kenneth Walker is not letting the Louisville Metro Police Department off the hook after the killing of his girlfriend Breonna Taylor.

Walker has filed a federal lawsuit against the department and the officers involved in the deadly shooting, accusing the LMPD of violating his constitutional rights. Per ABC News, the suit was filed Friday in the U.S. District Court for the Western District of Kentucky.

Taylor was fatally shot by police when plainclothes officers Myles Cosgrove, Brett Hankison, and Sgt. Jonathan Mattingly burst through her door with a narcotics warrant on March 13, 2020. She and Walker had settled in for the night when police arrived and knocked down the door. Walker, a licensed gun owner, said he thought an intruder was breaking in and he fired a single shot that struck an officer in the leg, theGrio reported.

Mattingly, the officer who was shot, recovered from the leg wound and remains on the Louisville police force. The two other officers have been dismissed from the department. In September, Mattingly defended his actions in an e-mail to his colleagues saying, “I know we did the legal, moral and ethical thing that night. It’s sad how the good guys are demonized, and the criminals are canonized.”

In an interview with Gayle King in October, Walker insisted that on the night of the shooting, both he and Taylor asked the person or people at the door to identity themselves multiple times with zero response.

“There was no response,” he told King. “So the next thing I know the door is flying open,” said the 27-year-old. “I’m a million percent sure that nobody identified themselves.”

“That’s why I grabbed the gun. Didn’t have a clue. I mean, if it was the police at the door, and they just said, ‘We’re the police’, I or Breonna didn’t have a reason at all not to open the door to see what they wanted,” he continued.

Prosecutors dismissed the attempted murder of a police officer charge against Walker in May, but left open the opportunity to revisit the charge against him if new evidence surfaced. Walker’s attorney previously said his client  “acted in self-defense,” and said that he “did not know that police were on the other side of the door.”

Earlier this month, Jefferson Circuit Judge Olu Stevens dismissed the 2020 indictment against Walker with prejudice, meaning it can’t be reconsidered.

“This is a very important lawsuit to vindicate Kenneth Walker’s constitutional rights under the U.S. Constitution,” Cliff Sloan, a Georgetown University Law Center professor who is representing Walker in the suit, told ABC News. “We are seeking to ensure that there is justice and accountability for the tragic and unjustified police assault on Kenneth Walker and killing of Breonna Taylor.”

Walker’s complaint accuses the LMPD of “tacitly approving excessive use of force” and failing to “adequately train its officers in using reasonable (and not excessive) force.”

“Although Mr. Walker had committed no crime, officers on the scene took him into custody. Defendant Hankison told Mr. Walker that he was ‘going to jail for the rest of [his] life,'” the complaint states, per ABC News.

According to the report, Walker is seeking compensatory and punitive damages. The lawsuit was filed a day before the anniversary of Taylor’s death. 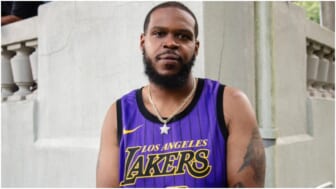